Built in the Palazzo Guicciardini located in the historic center of Montopoli in Val d´Arno, the Civic Museum was set up in the spring of 2003.
Since its foundation, its primary aim has remained that of collecting materials of interest and significance related to the archaeology, history, art or natural history from this area of the Province of Pisa so that it can play the role of a kind of visiting card that encourages people to rediscover the richness of its city centers and their surrounding area. It was for this reason that the Civic Museum was conceived of and structured as the primary hub of a future “Montopolese Museum System”, as part of which some of the other sites have already been built.

The Civic Museum is therefore structured in a variety of thematic sections that are located on the different floors of this ancient building. On the first floor, the Ancient Archaeology Section of the Museum exhibits the important Majnoni and Baldovinetti collections with its Etruscan, Roman and early medieval objects, part of which comes from local excavations. It also houses the personal collection and documents illustrating the life and work of Isidoro Falchi, a doctor from Montopoli and a passionate archaeologist, whose name is closely associated with the discovery of the Etruscan necropolises of Vetulonia and Populonia in the late 19th century.

There is also a section dedicated to the research of medieval and post-medieval archaeology in the Fortress of Montopoli, which has helped to shed new light on the art and history of the area after the year 1000 together with a series of coats-of-arms, stone fragments, frescoes and liturgical furnishings from prestigious city buildings, which are all displayed here.

A separate room is dedicated to the production of Montopoli artistic terracotta by Dante Milani. In 1923 Milani had the first of his ceramic kilns built in this area, which was soon accompanied by other artisan workshops, giving rise to a production of artistic ceramics that soon became famous in Europe and around the world. Between 1929 and 1943, the factory reached its maximum commercial development thanks to Milani’s evident talent at promoting his terracottas throughout Italy and abroad, especially through permanent exhibitions and resales in Montecatini, Turin, Rome and New York.

On the lower ground floor, there is a room dedicated to paleontology, with important fossil remains alongside temporary displays of materials dating back to Etruscan until Modern age, coming from the activities of the “Isidoro Falchi” Archaeological Group operating in this area.

Finally, a further section of the Museum is located on the first floor and is entirely dedicated to contemporary figurative arts, with works by local artists: Silvio Bicchi (1874—1948) a post-macchiaiolo (an Italian post-impressionist) painter; Menotti Pertici (1904—1966) and Mario Borgiotti (1906—1977), students of the Bicchi; Paolo Ciampini (b. 1941) an internationally renowned engraver.

The colors of the rooms.

Each room is marked with a color on the plant that orients in the visit to the museum, here’s what: 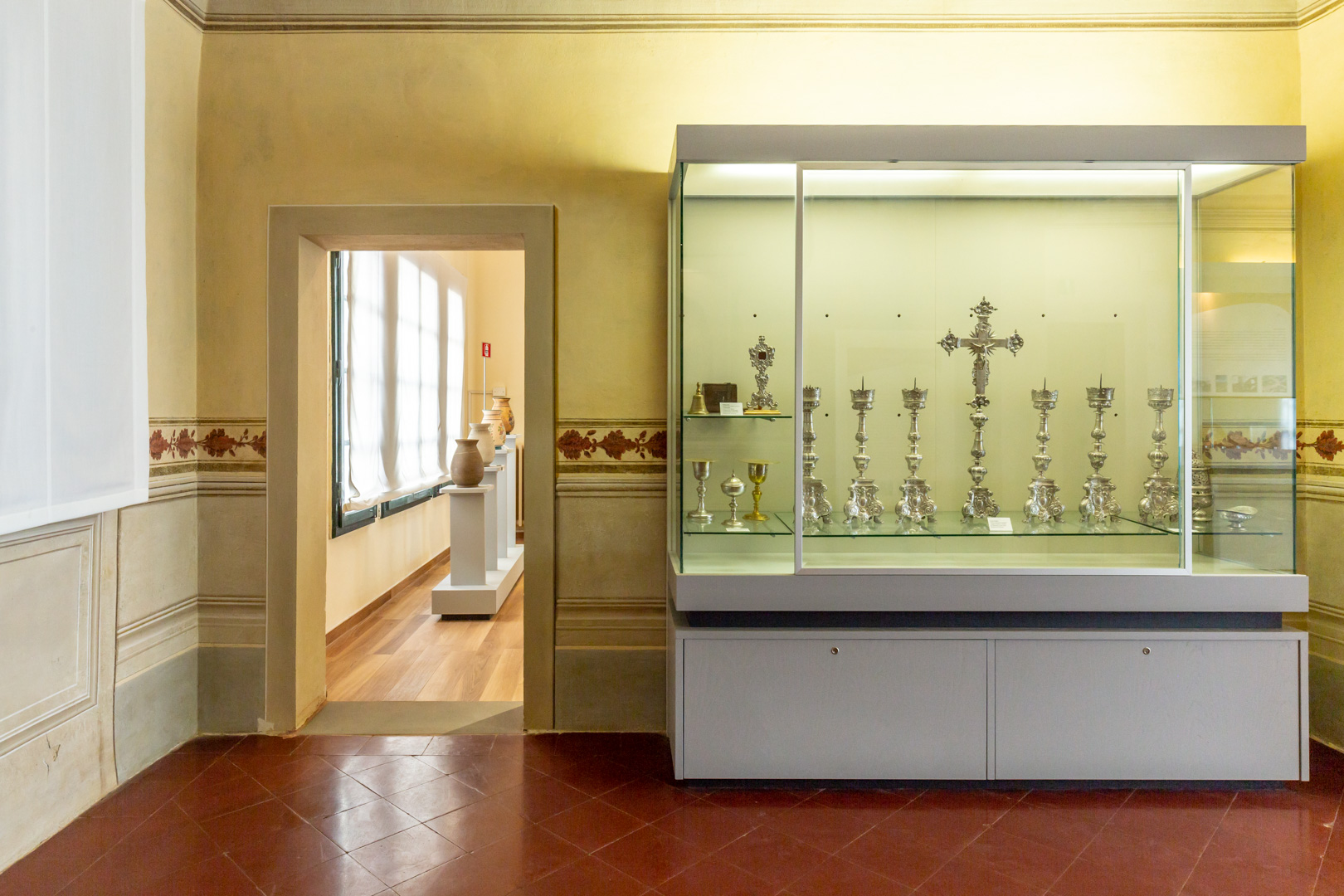 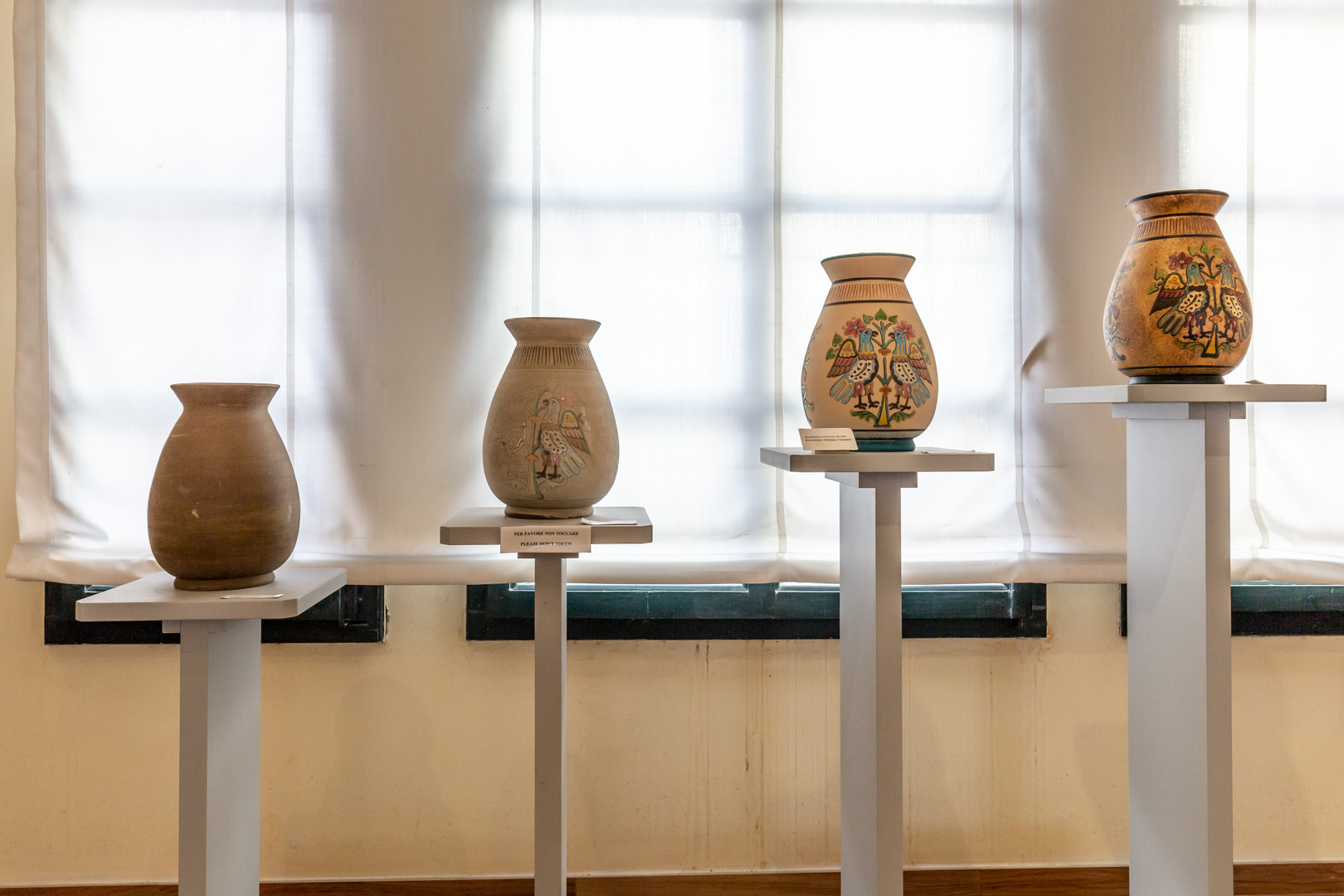 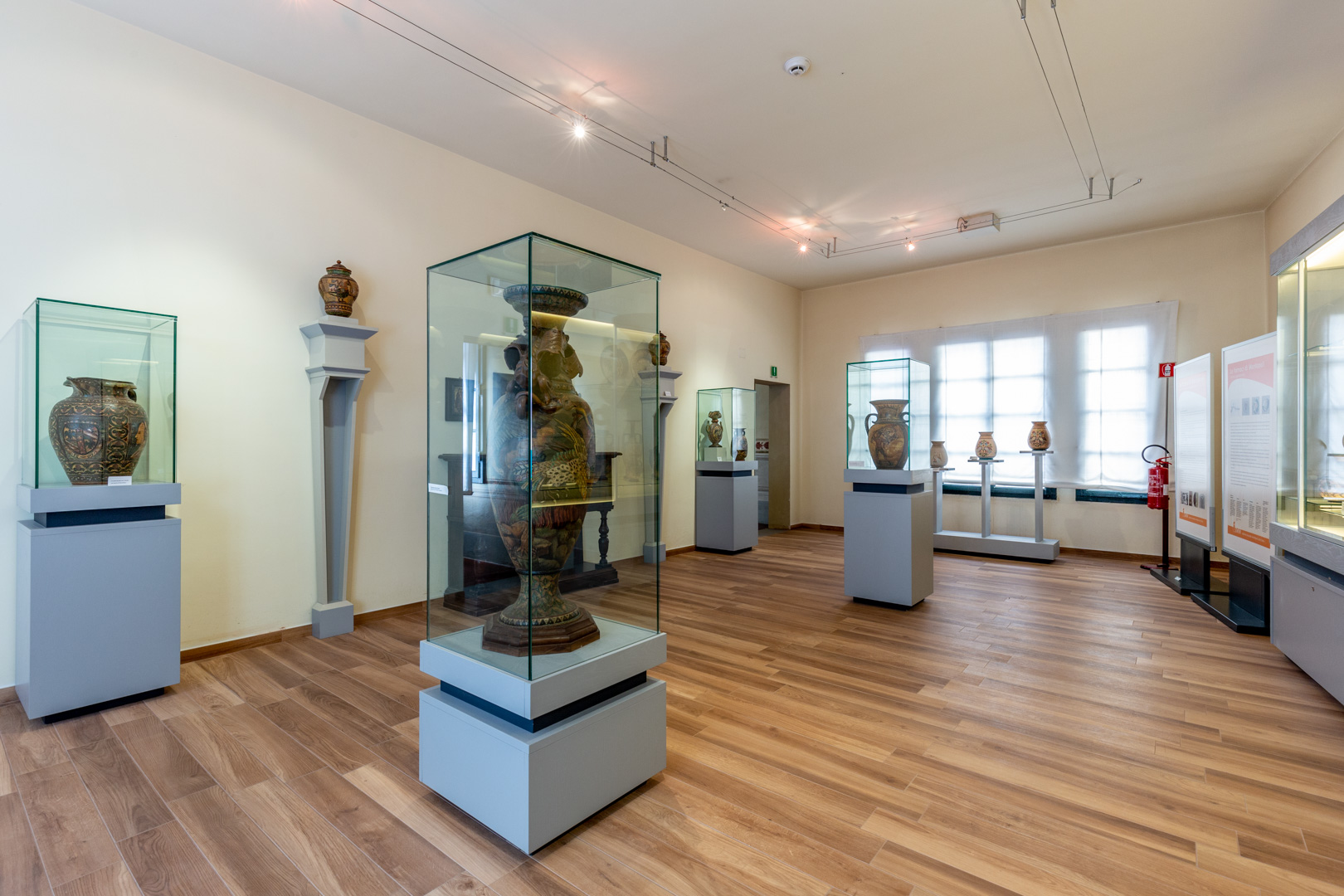 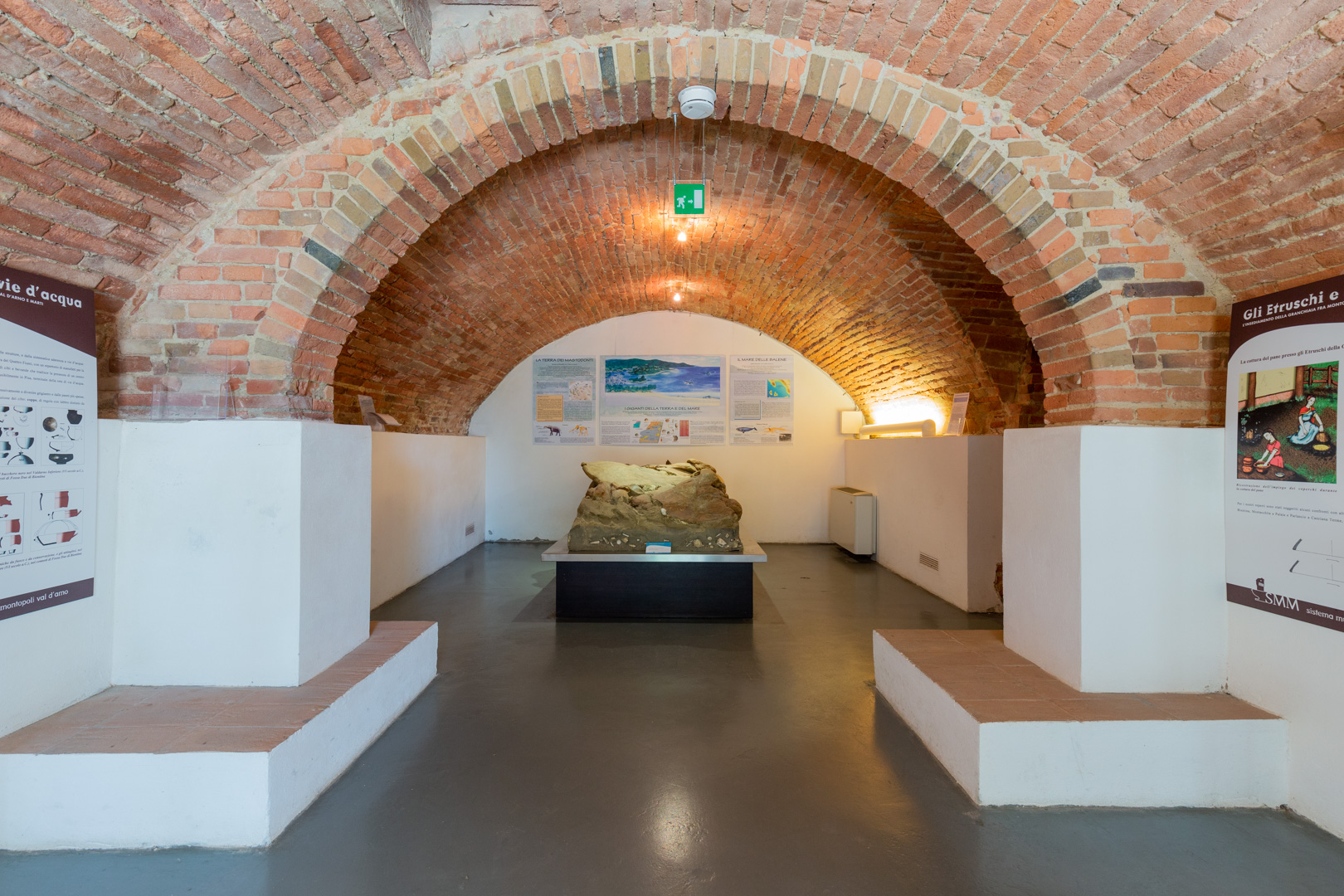 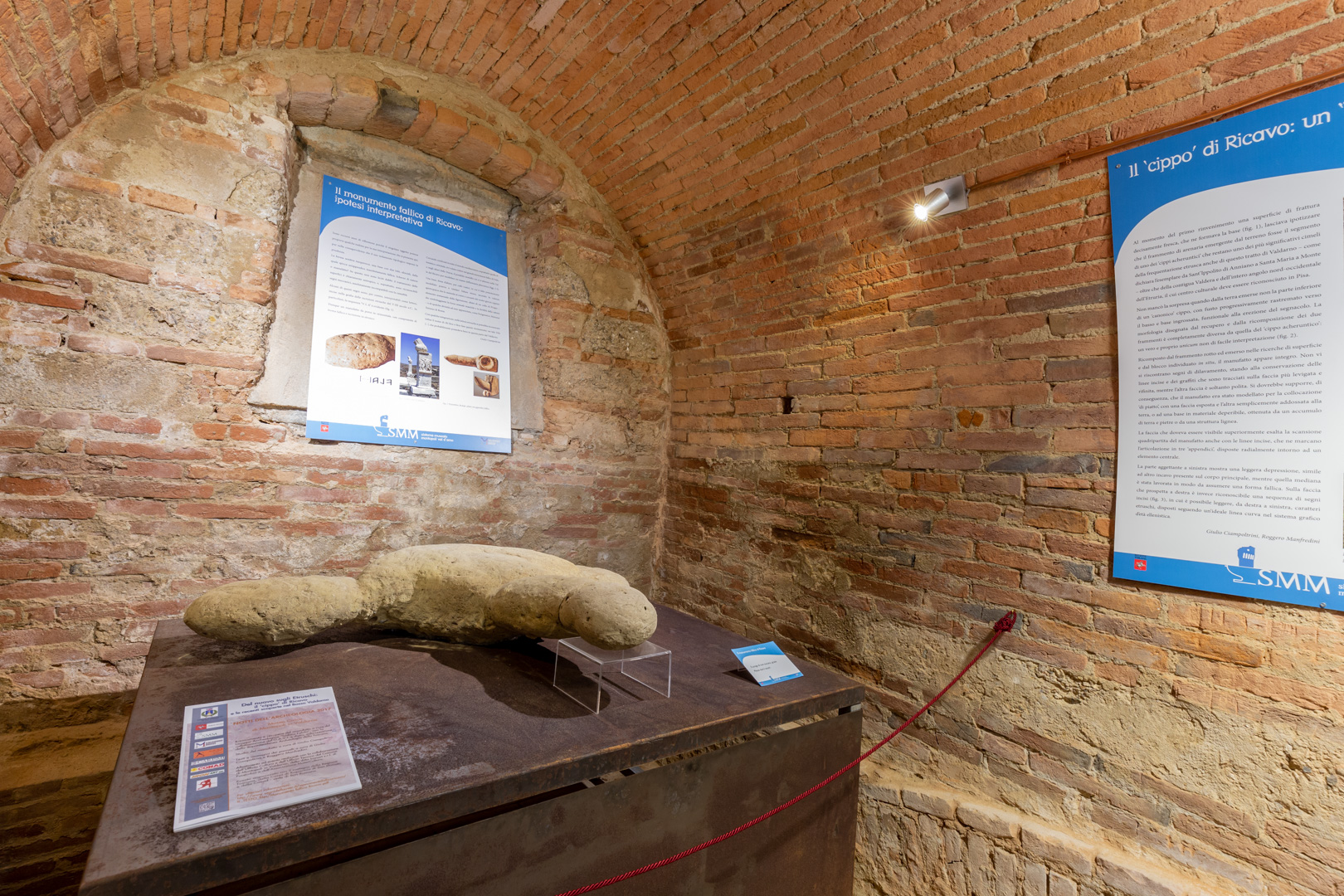 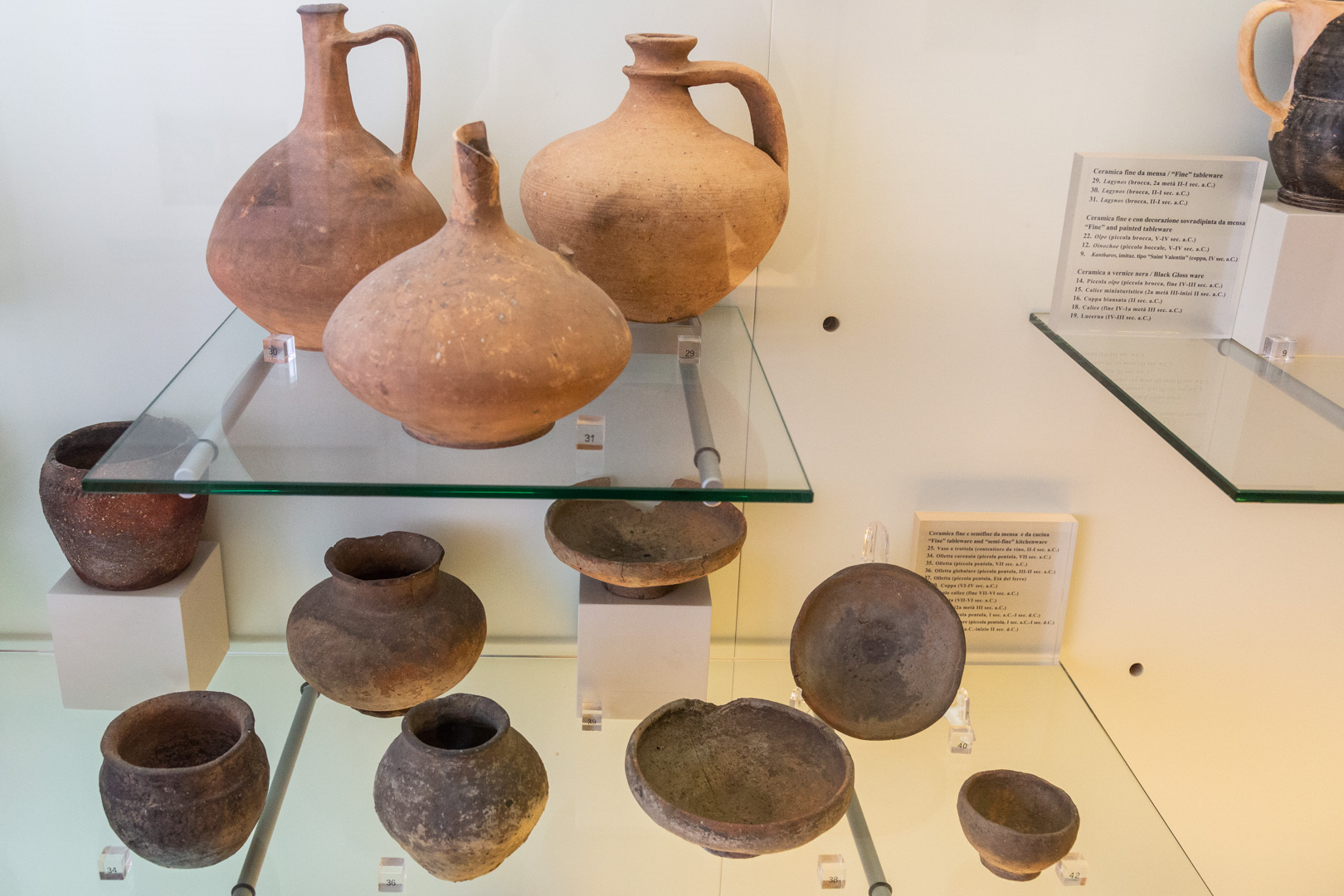 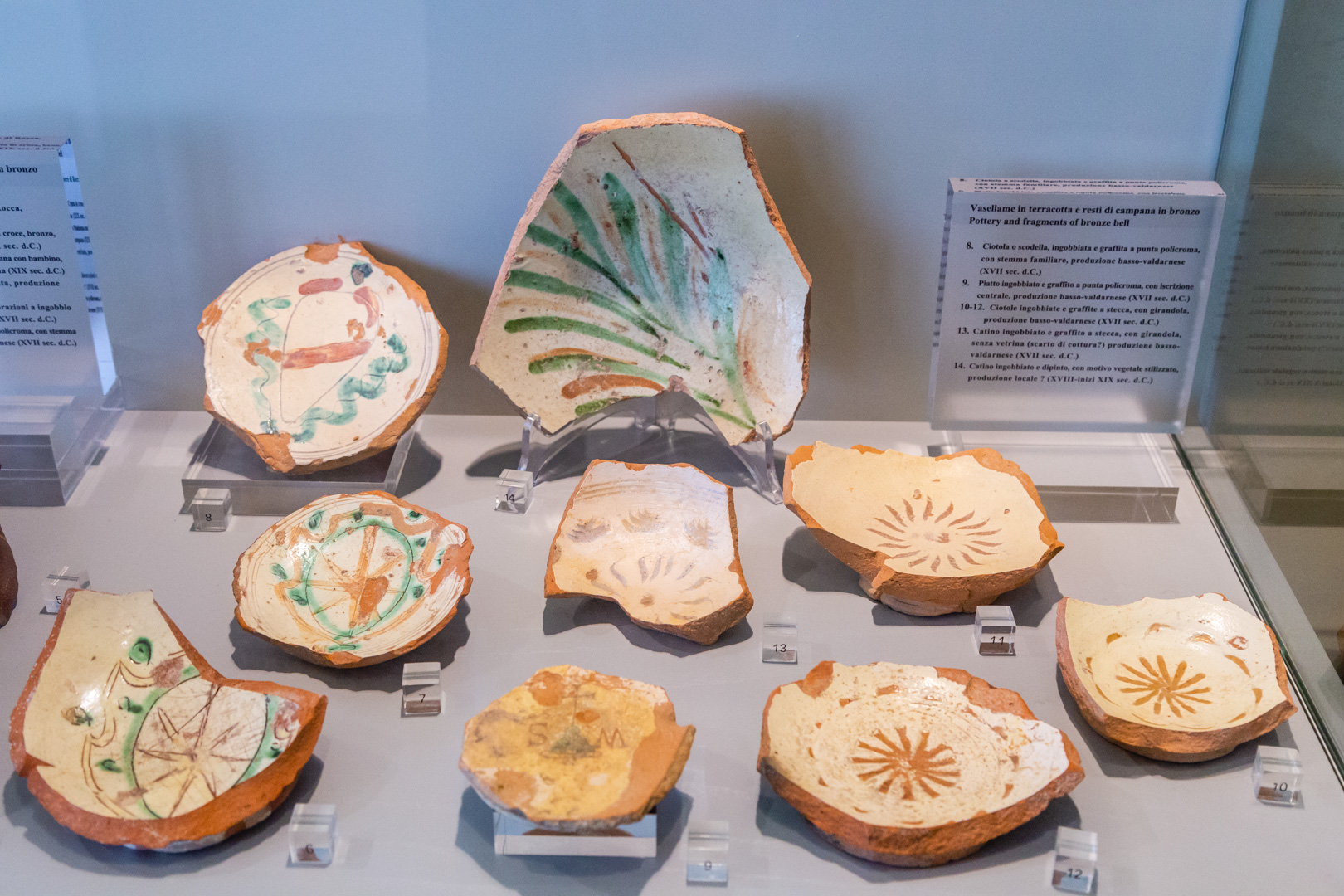 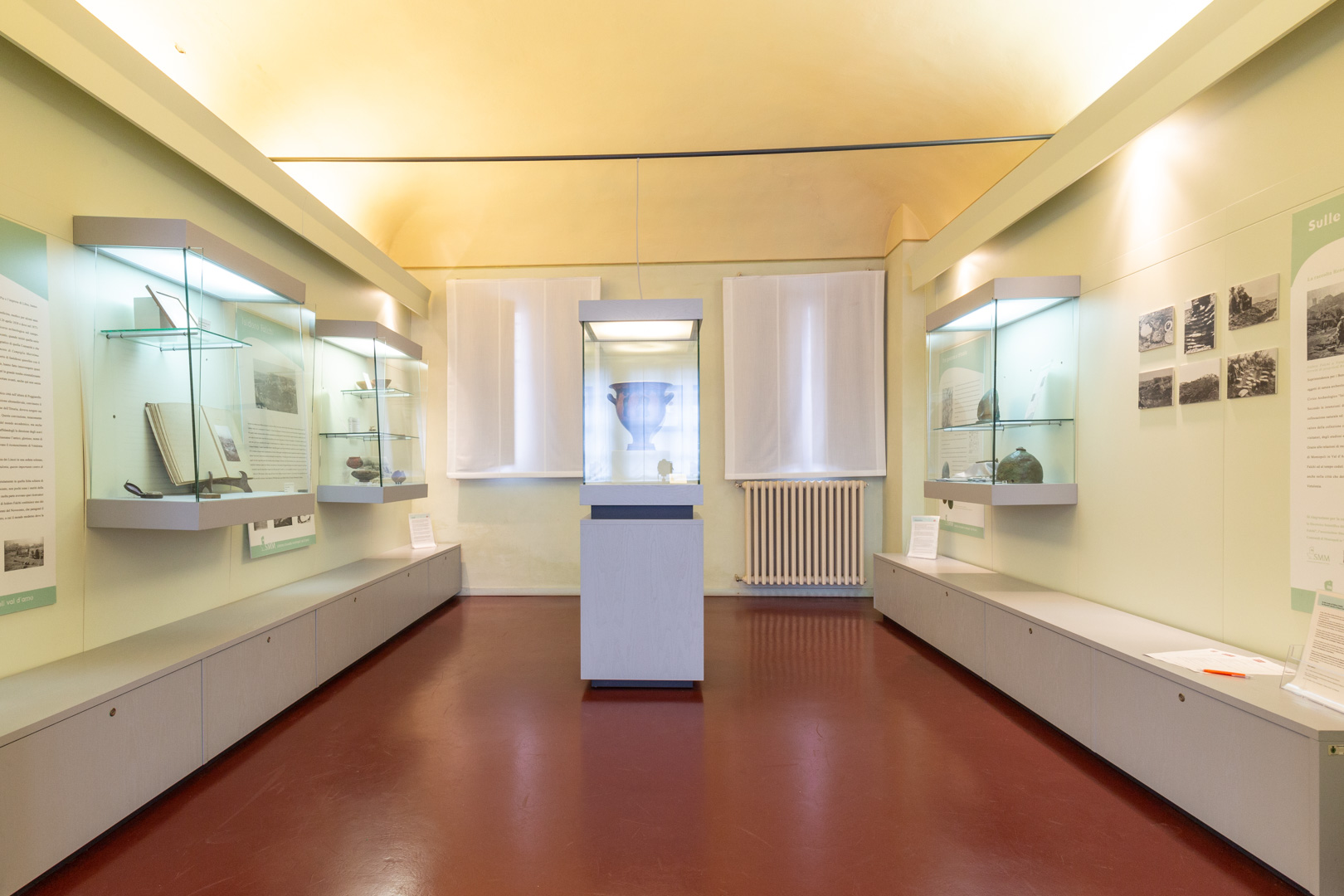 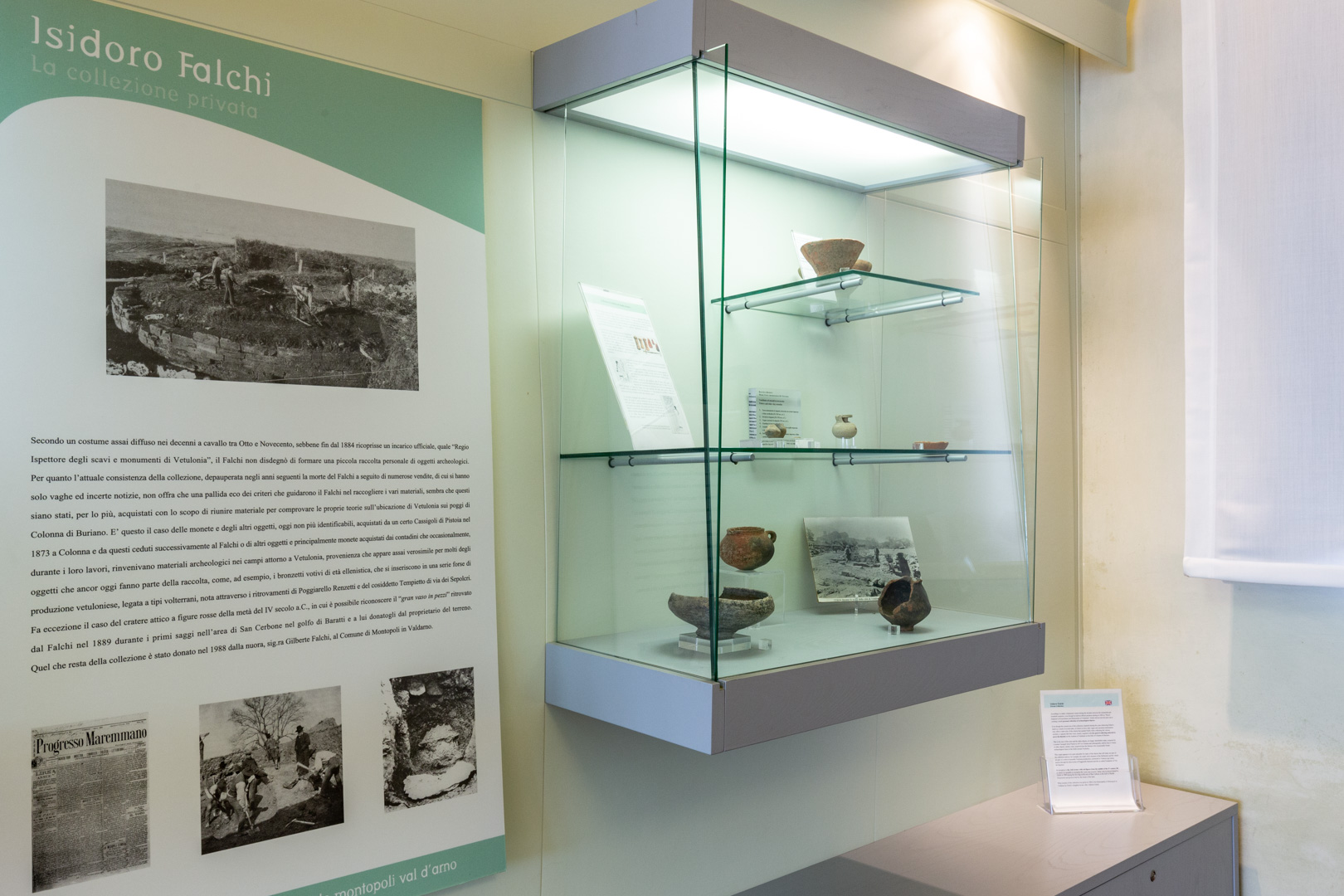 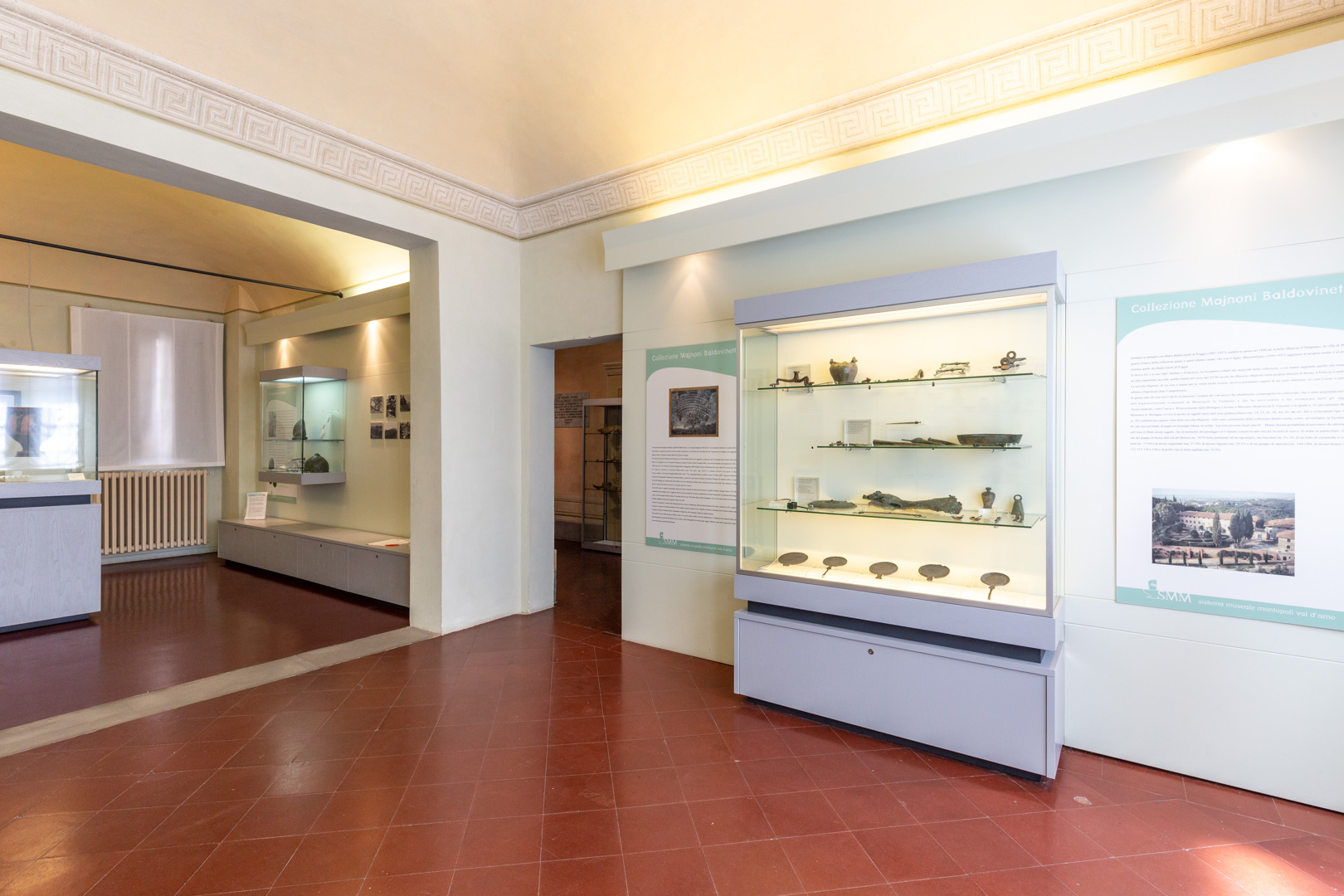 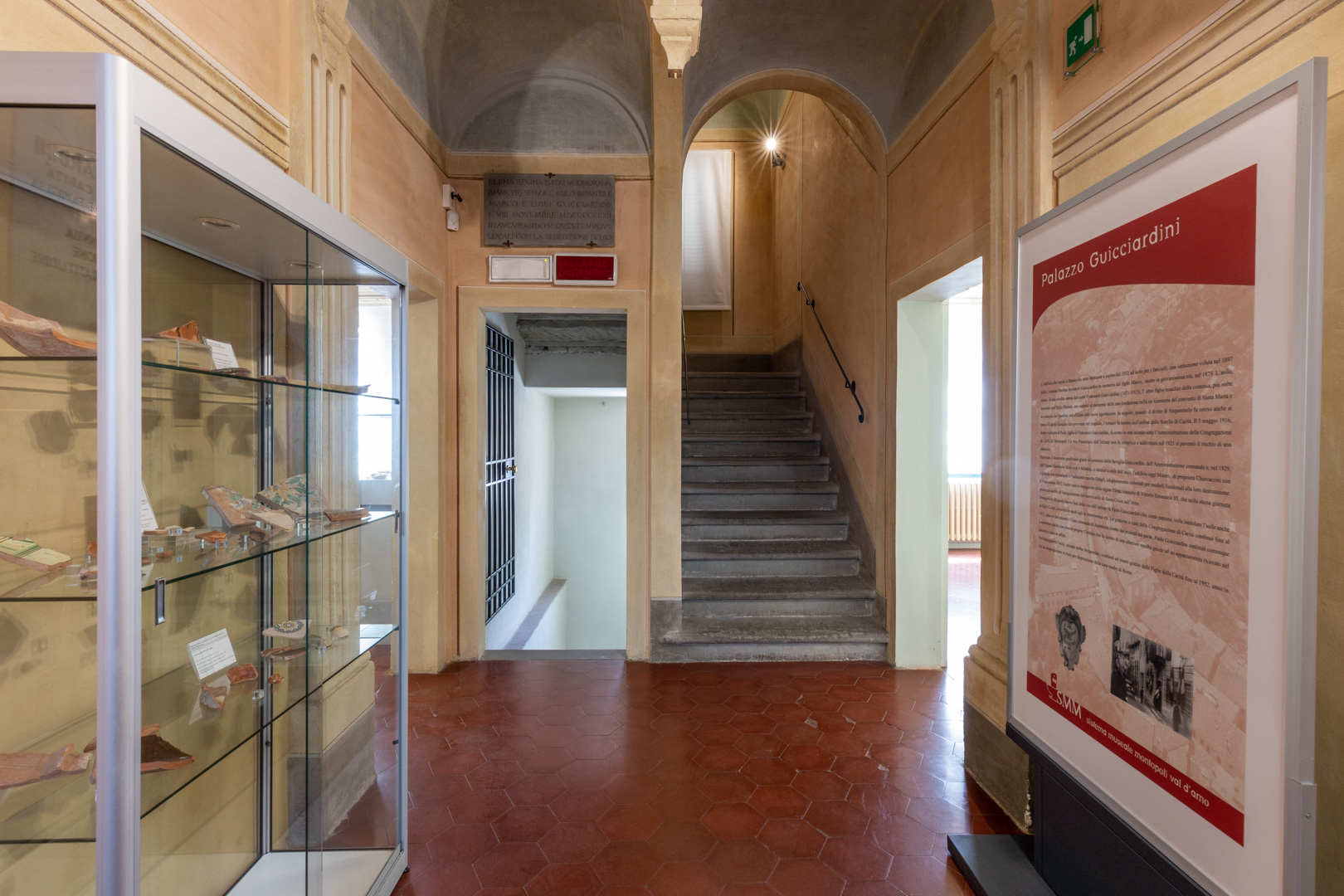 Description of the rooms

Isidoro Falchi was born on April 26, 1838 in Montopoli in Val d’Arno by Luigi di Giuseppe Falchi and Bibbiena Grazzini.

After getting his medical degree in Pisa, Falchi became a doctor at Campiglia Marittima, where he was also elected as a Town Councillor between 1879 and 1883, first devoting himself to the study of the commonage and the so-called “usi civici” (rights of common). This was the starting point of his archival research, which culminated with the publication of his first volume entitled “Popular Treatments on the history of the Maremma and especially of Campiglia Marittima”, printed in Prato in 1880. Subsequently, Falchi focussed in the study of documents kept in the State Archives of Siena and, based on reports of some findings in the area, he began some research campaigns that led to the discovery of the ancient Etruscan city of Vetulonia. The museum of Montopoli preserves artefacts and information about the archaeological activity of this scholar.

The terracotta of Montopoli in Val d’Arno

The production of bricks and pottery has been practiced in Montopoli and its surroundings since the late Middle Ages. The fame of the montopolese terracottas, however, is due to the original productive experience of Dante Milani, starting from 1928, when he converted his factory in the production of artistic terracotta (slip sgraffito and painted ware, then patinated). A website traces its history and the tradition of Montopoli …

Although the area of Montopoli and its surroundings had the raw materials necessary for the production of ceramics and this kind of factories was also fairly widespread in the area from the Middle Ages until the unification of Italy, at the end of the nineteenth century very few remained active, perhaps for the competition suffered, at least with respect to the brick production, by the diffusion of the continuous cycle kilns (Hofmann type) in the neighboring areas, such as in Pontedera.

When Dante Milani started his activity in Montopoli, in 1920, the situation had changed little compared to the end of the previous century, so much so that in one of his letters he was able to state that Montopoli had no “ceramics traditions”. Actually, the period between the two World Wars saw a recovery also of small production centers in this area and represented the golden moment for the manufacture of bricks and of various types of ceramics. From the documents kept in the Historical Archives of the Camera di Commercio (Chamber of Commerce) of Pisa, it appears that in addition to Milani, at least three other brick kilns started their activities in the territory of Montopoli in the 1930s. During the same period, there were several brick, pottery and glazing stores in the center of Montopoli too.

The ceramics factory of Dante Milani began its activities in 1920 and the company initially took the name of “L’Eterna”, which maintained at least until 1928. At first it produced bricks (1920-1922) and then slip and glazed pottery, but with modest economic success.