The exhibition rooms of the Civic Museum “Beata Diana Giuntini” are part of a building connected to the La Rocca Archaeological Area. The museum is a place welcoming both connection of the local community with its past traditions and all those testimonies recorded in the archaeological finds on display without which it is impossible to understand local history.

The subject matter collection most closely related to local history and the figure of the patron saint is located on the ground floor. The first part of the visitor route, designed as a kind of welcome to visitors, connects the coat-of-arms of the Municipality of Santa Maria a Monte in its current and 15th-century guise with the medieval statue of the Madonna and Child – a painted and gilded wooden sculpture preserved in the Collegiate Church of Santa Maria a Monte. The second room, featuring the historical figure of the Blessed Diana Giuntini, sets itself the objective of unravelling the biographical history of the Patroness by using documents on display from archives and libraries, and many other valuable works.

Since September 2017, the first floor has housed the almost entirely archaeological visitor route which takes into account the findings from the excavations carried out in the sites of Sant’Ippolito in Anniano and the Rocca fortress. 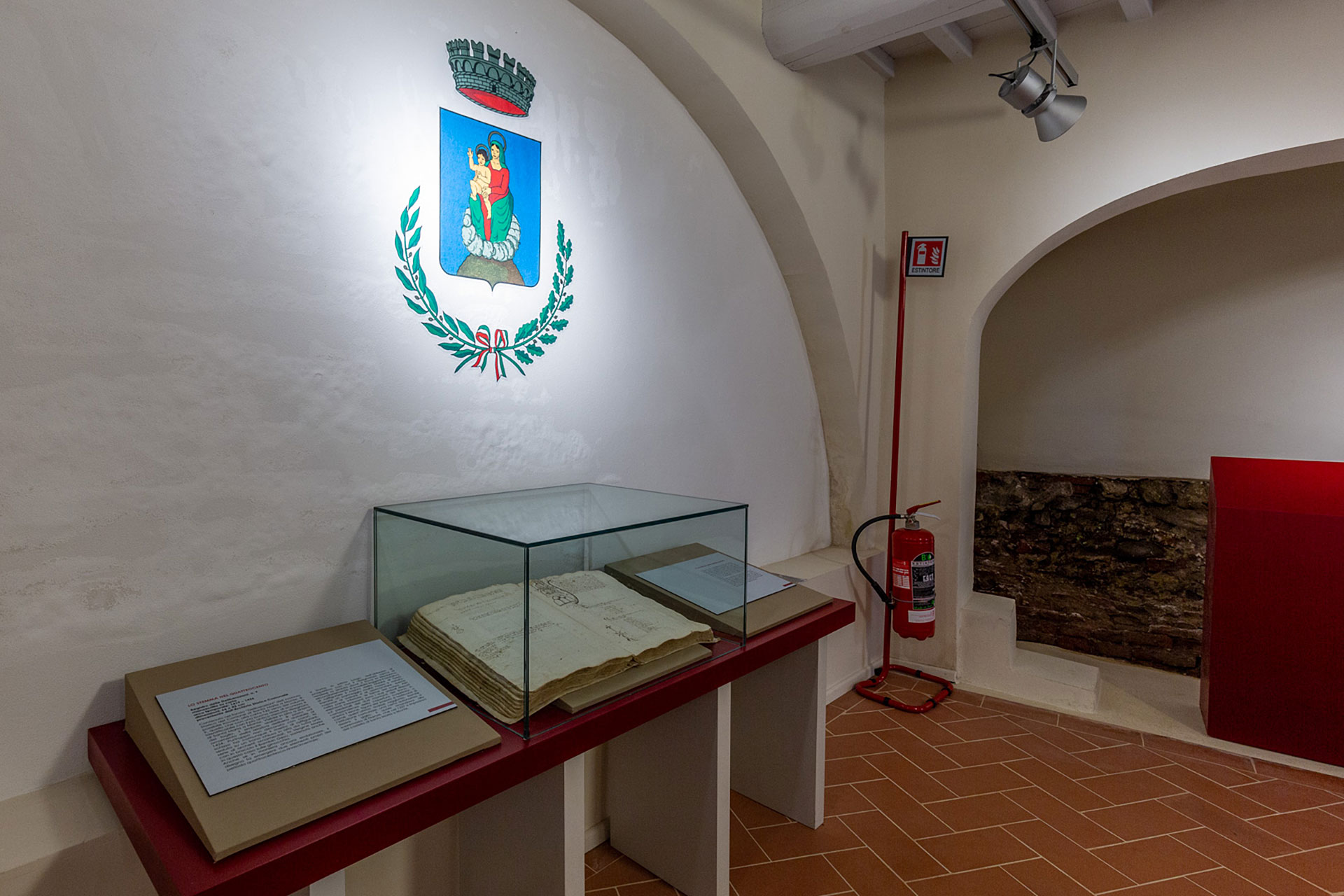 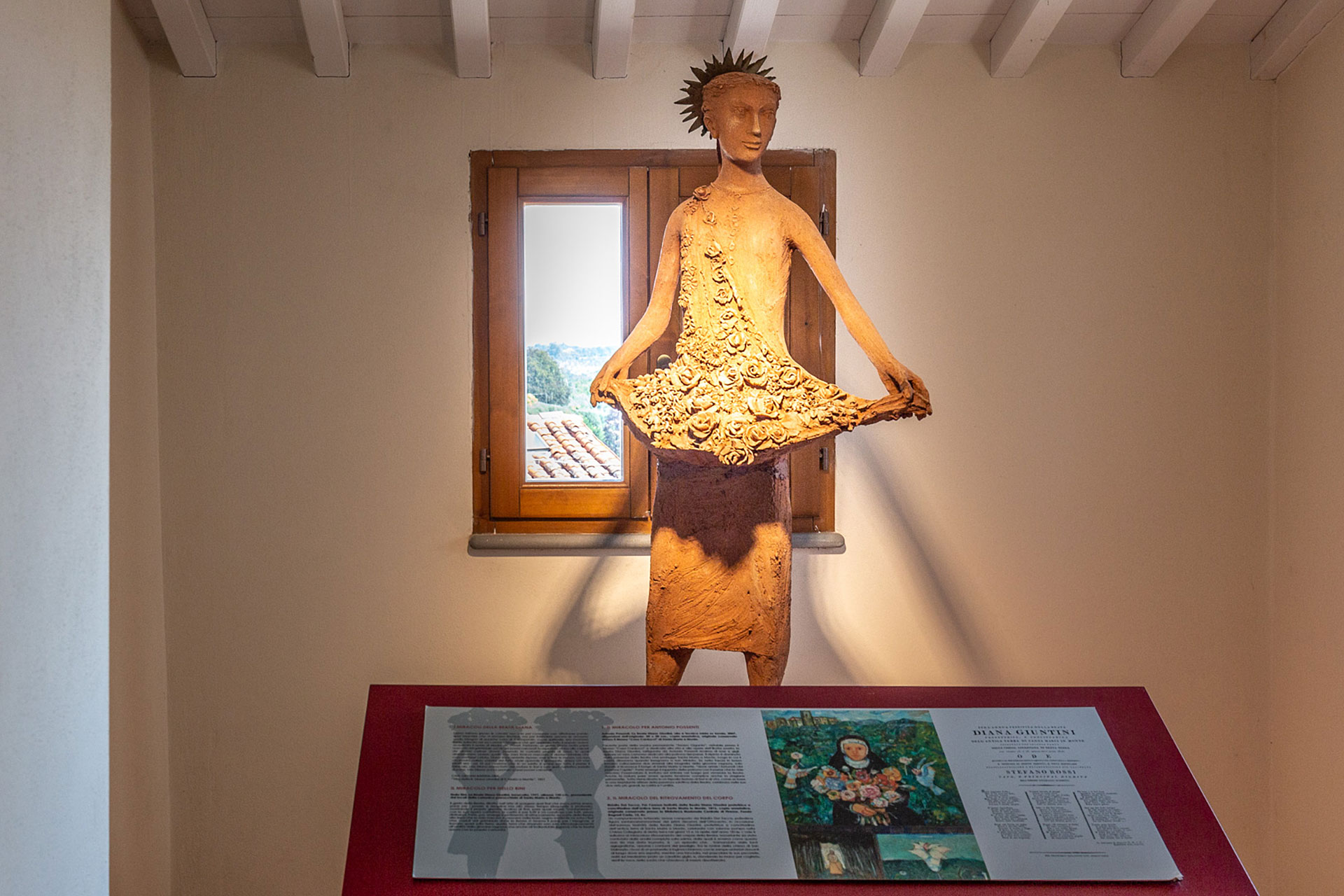 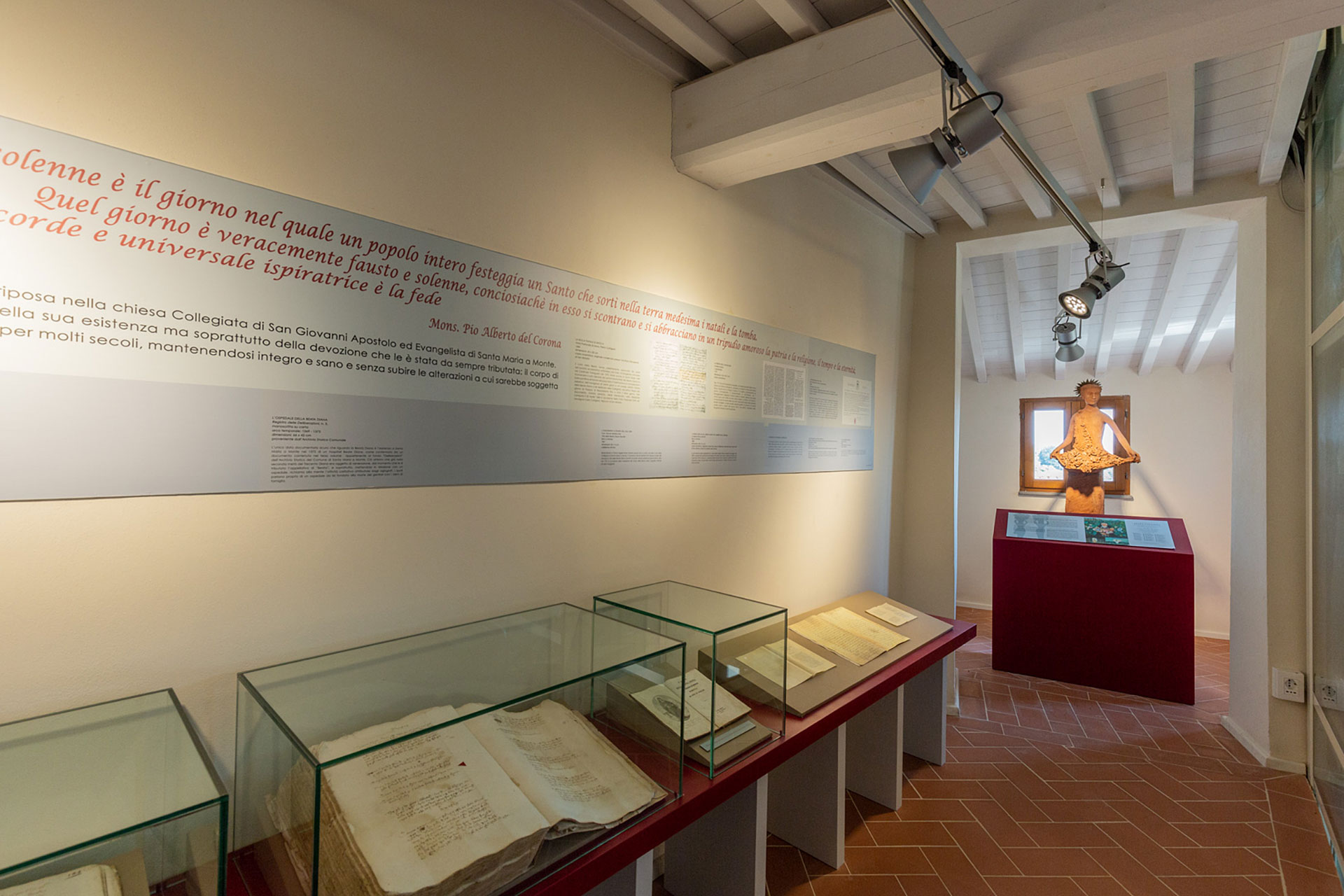 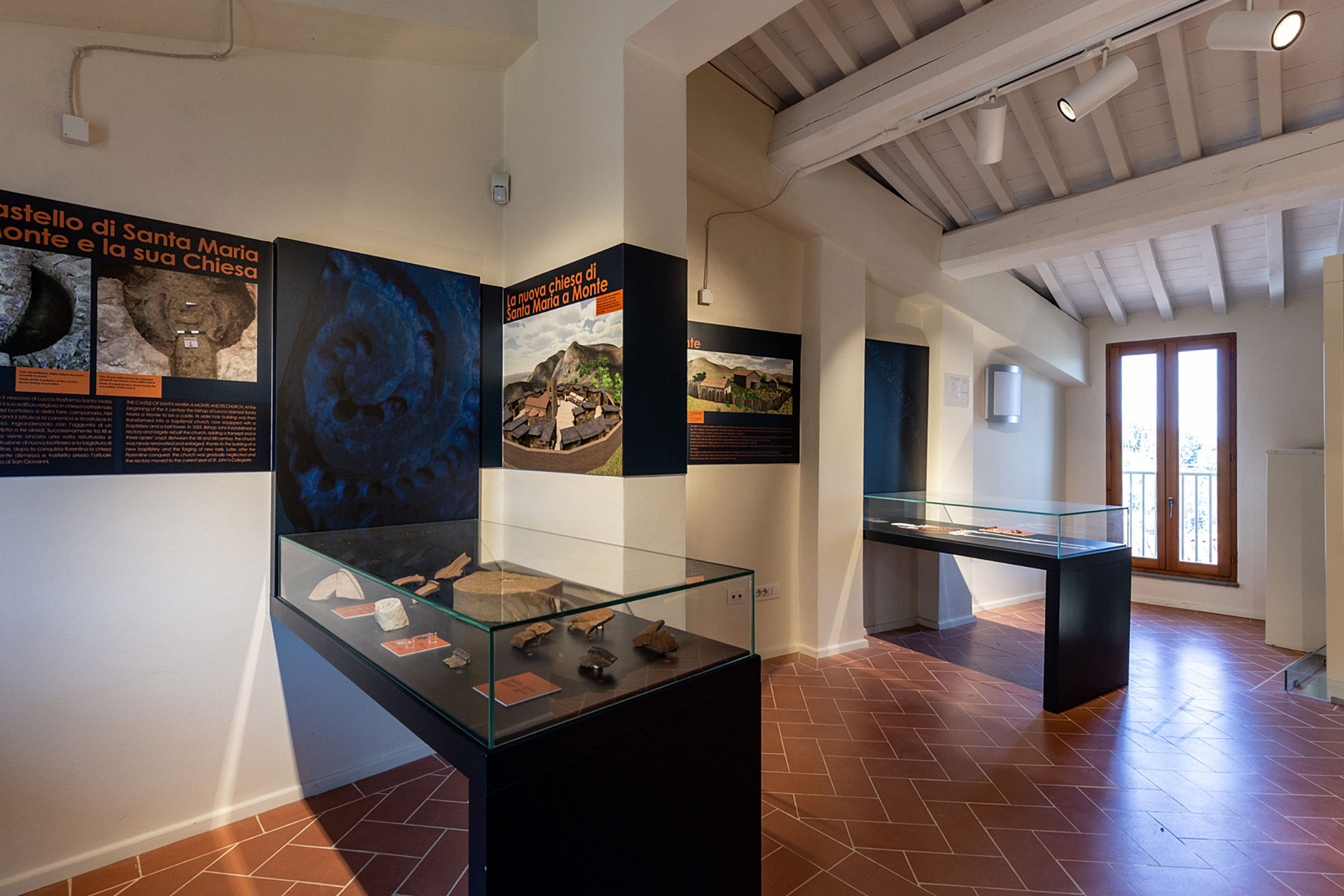 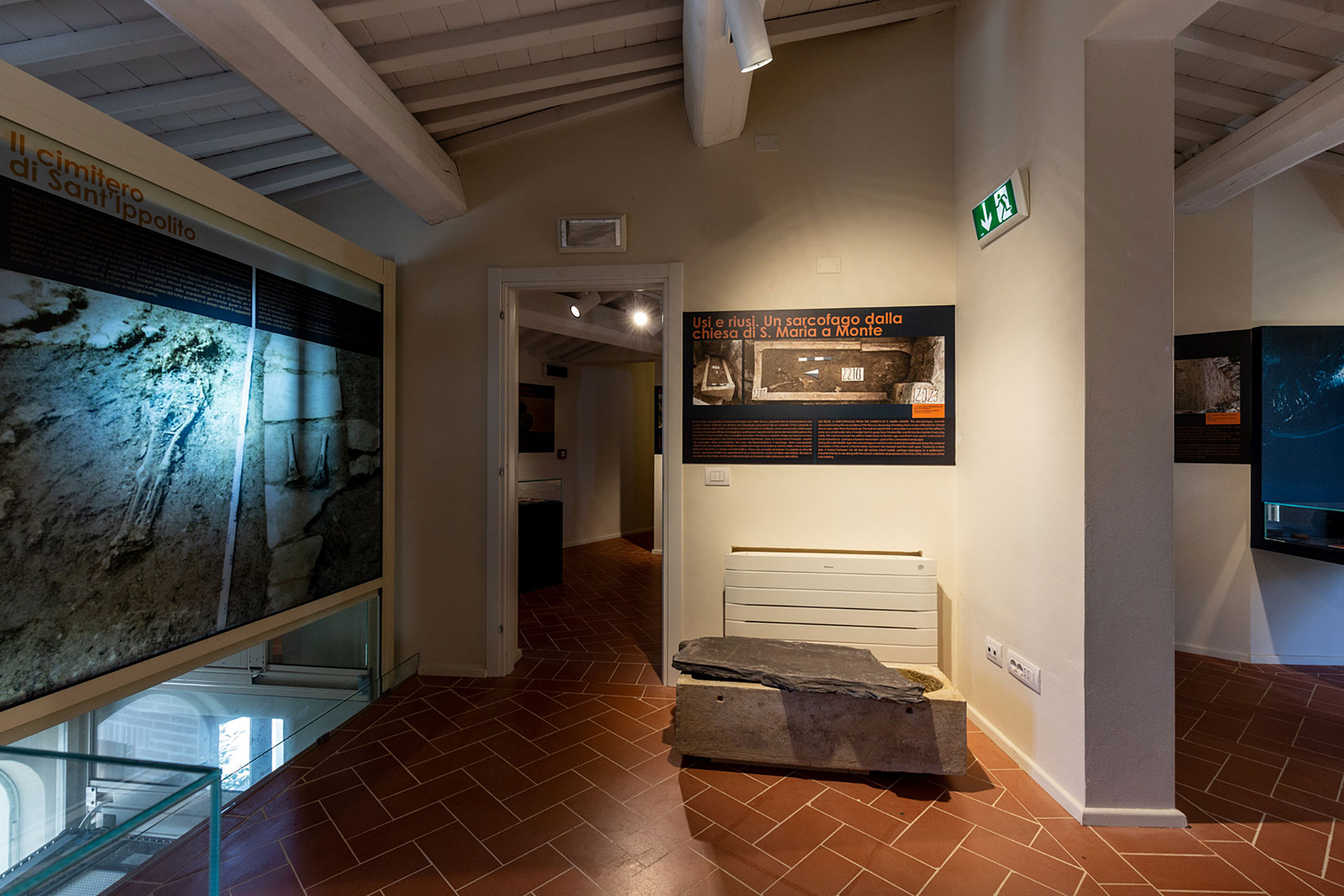 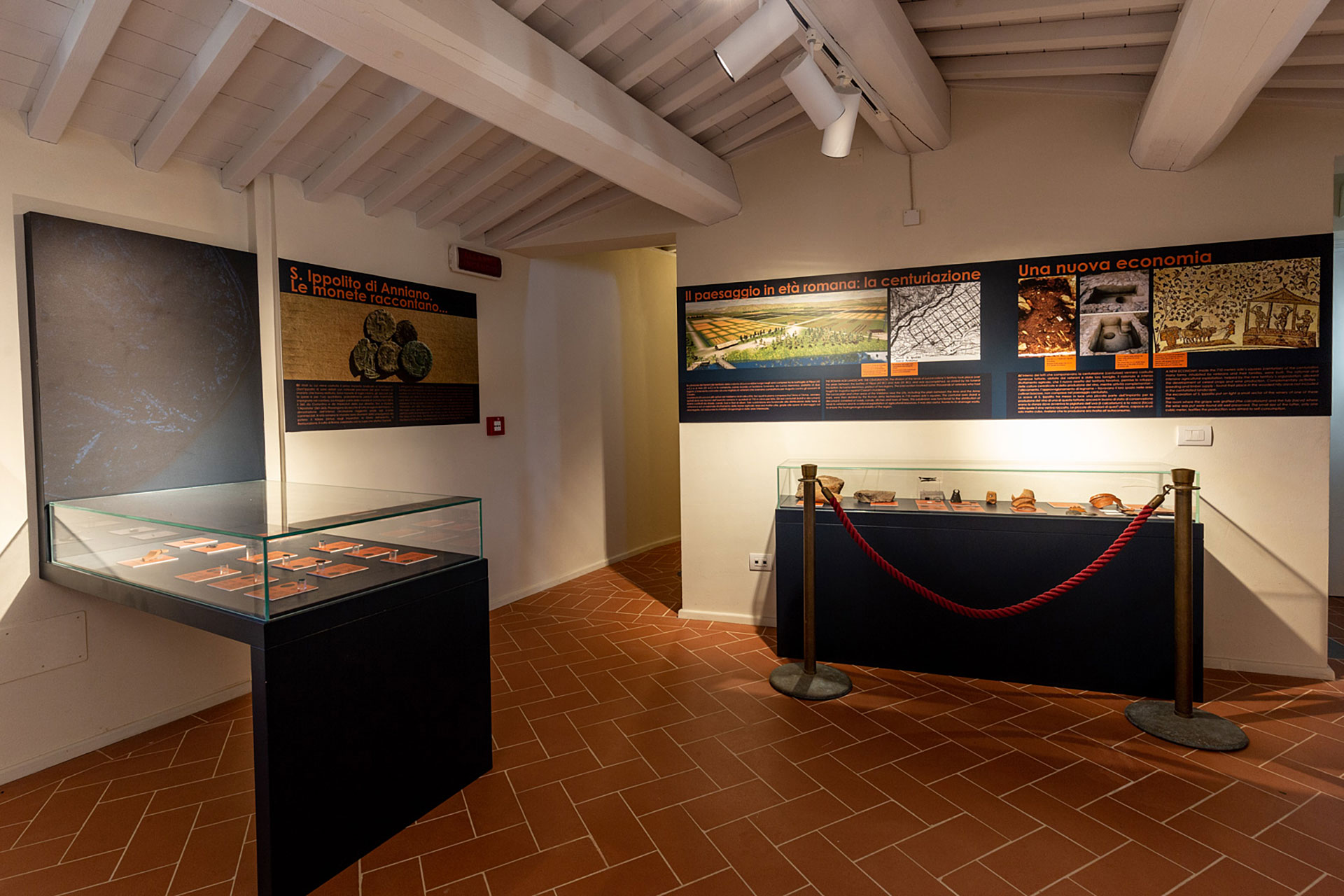 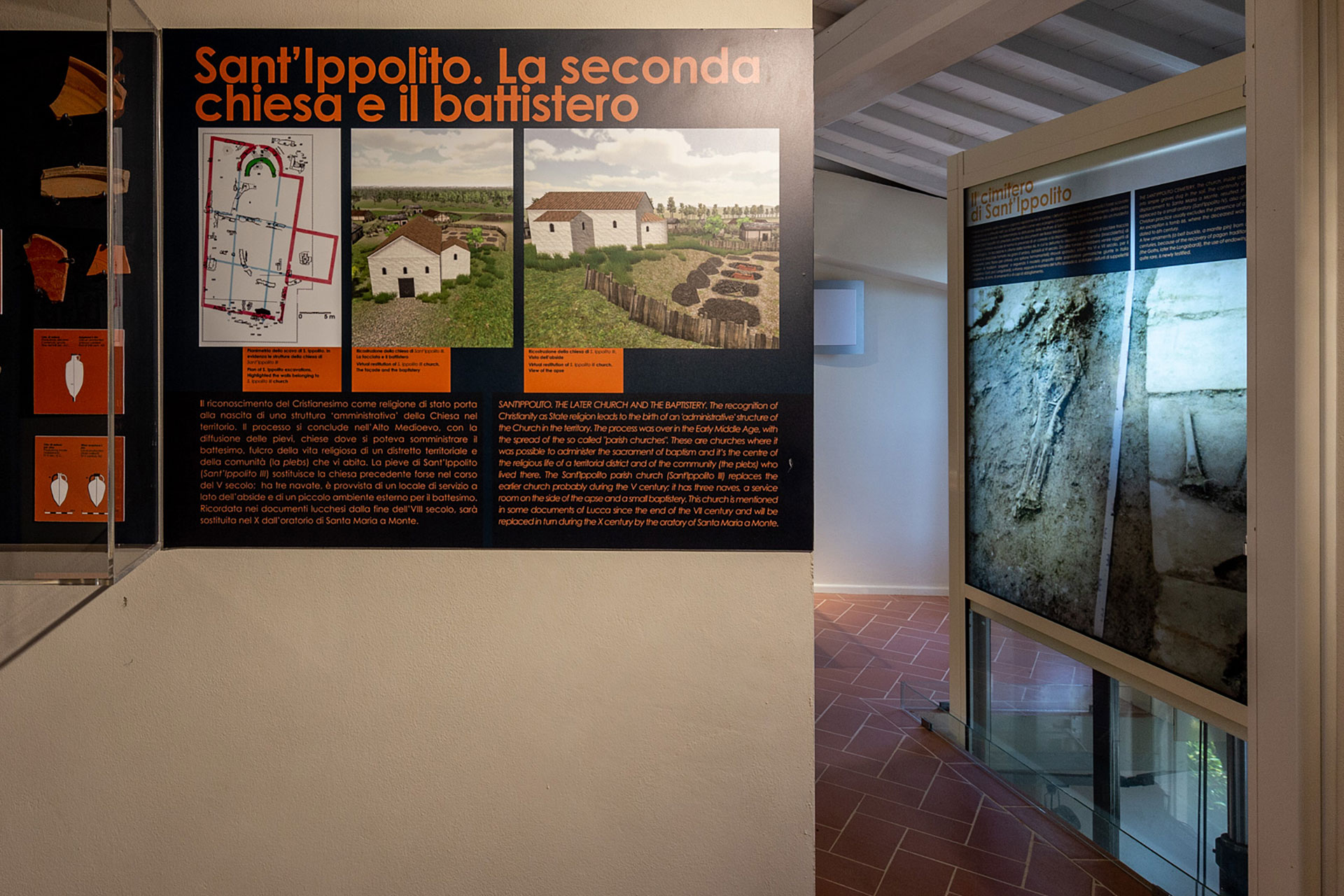 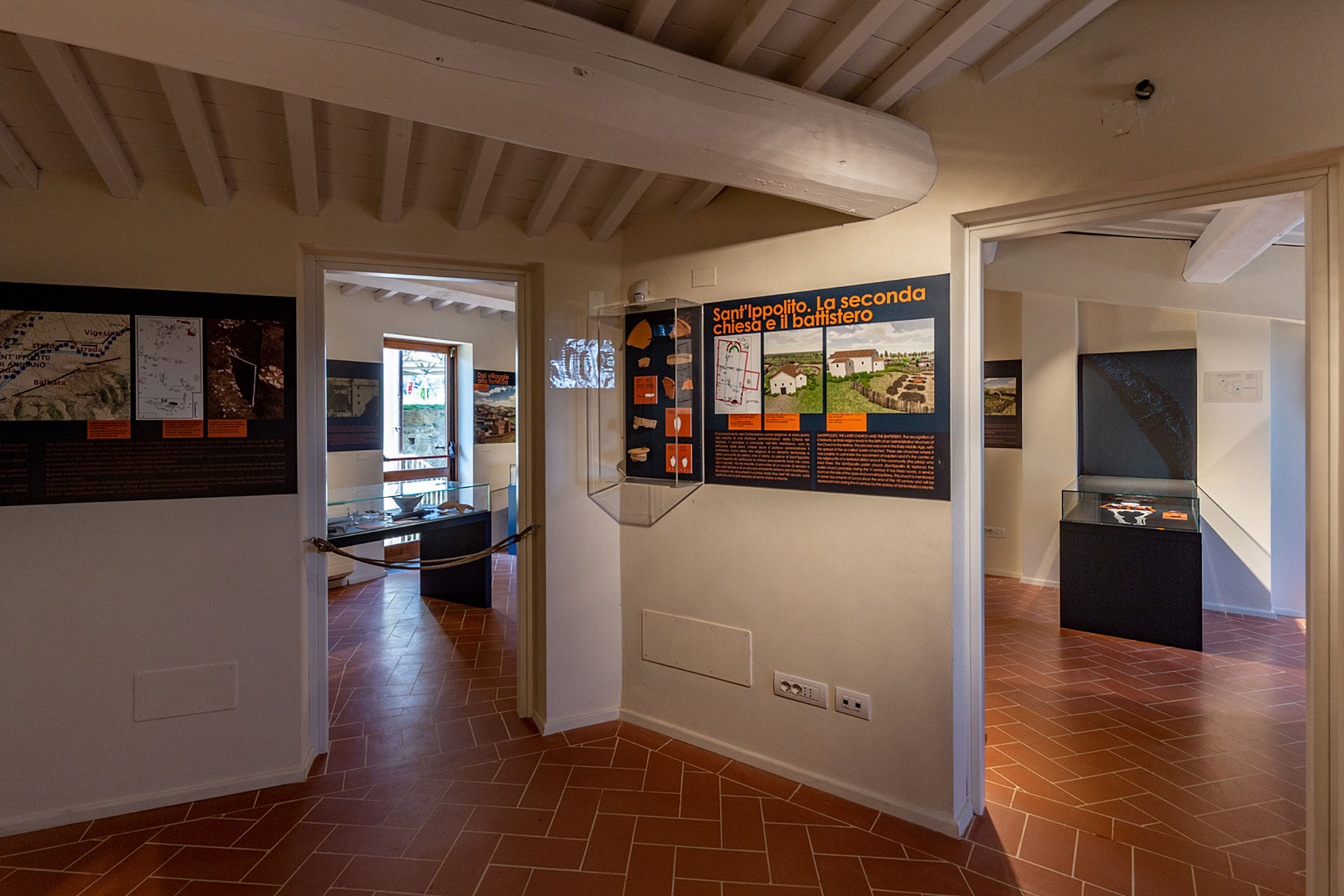 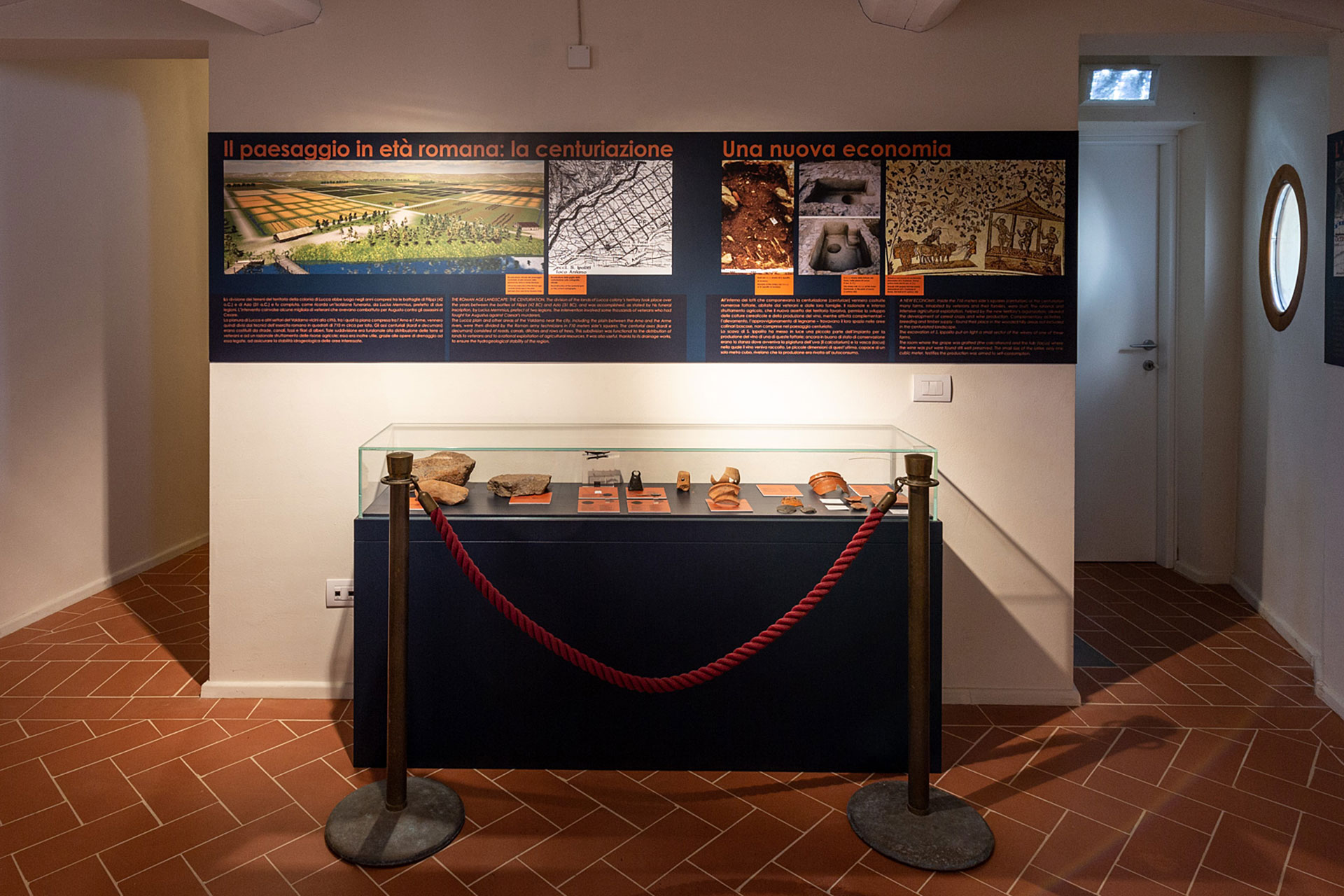 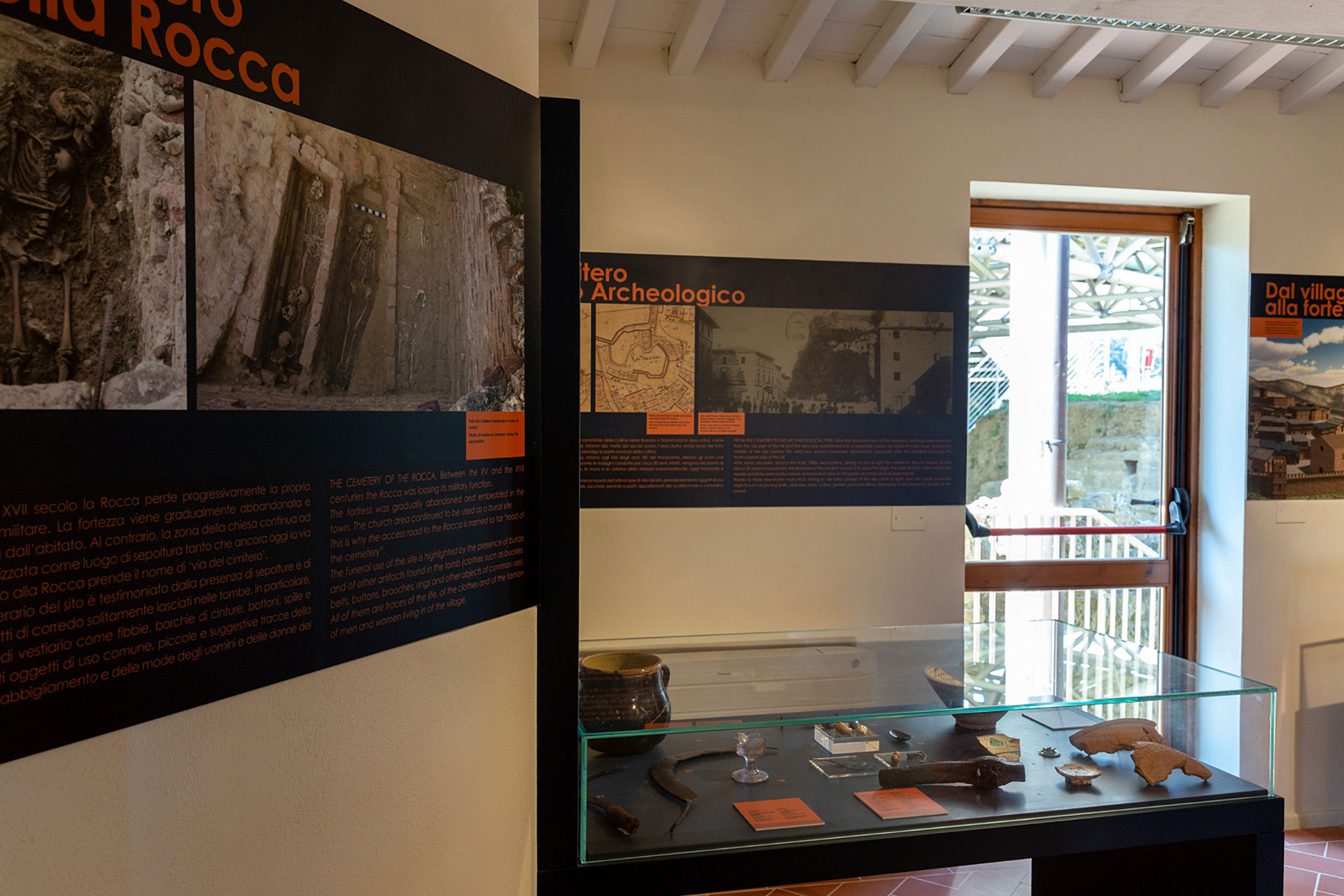 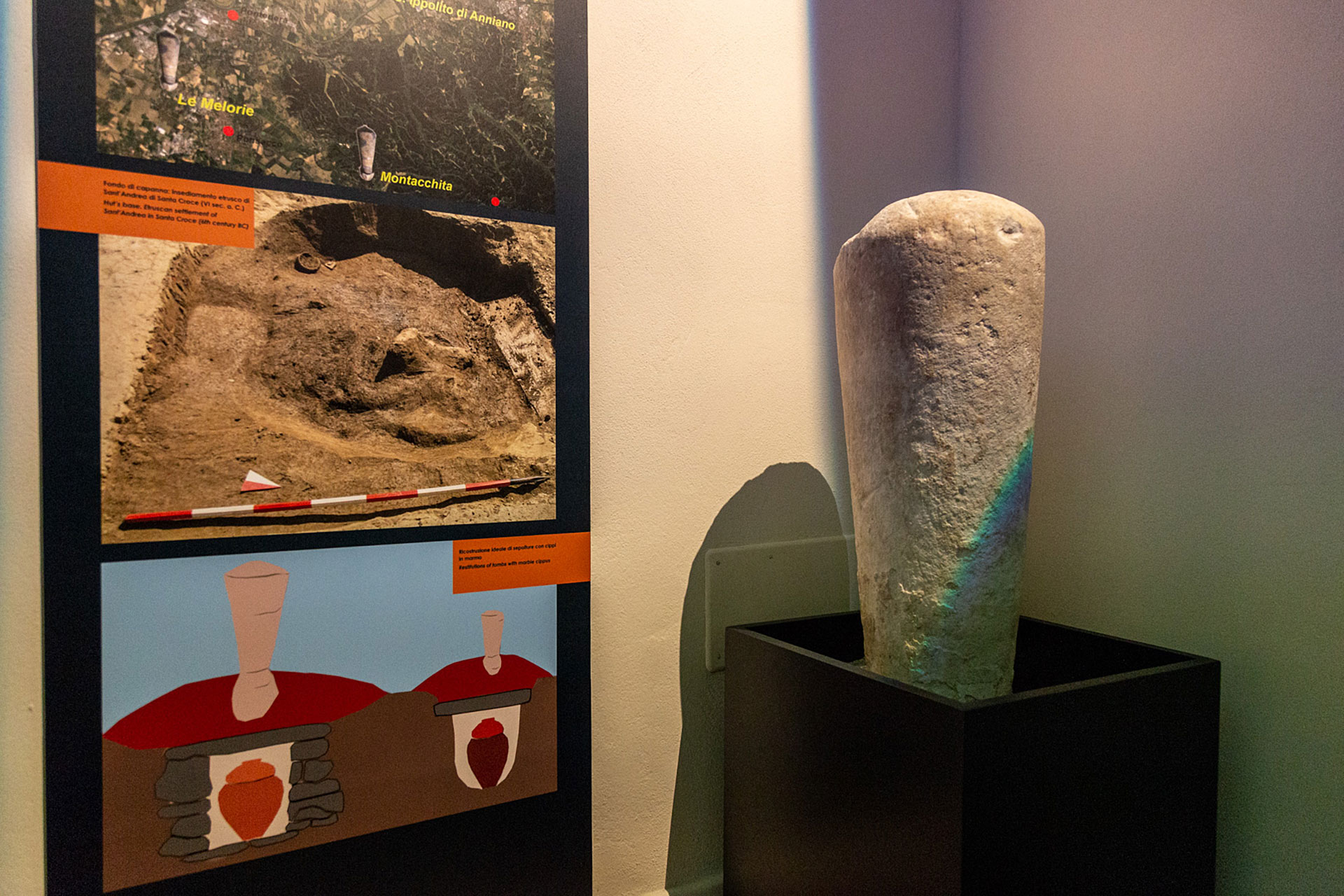 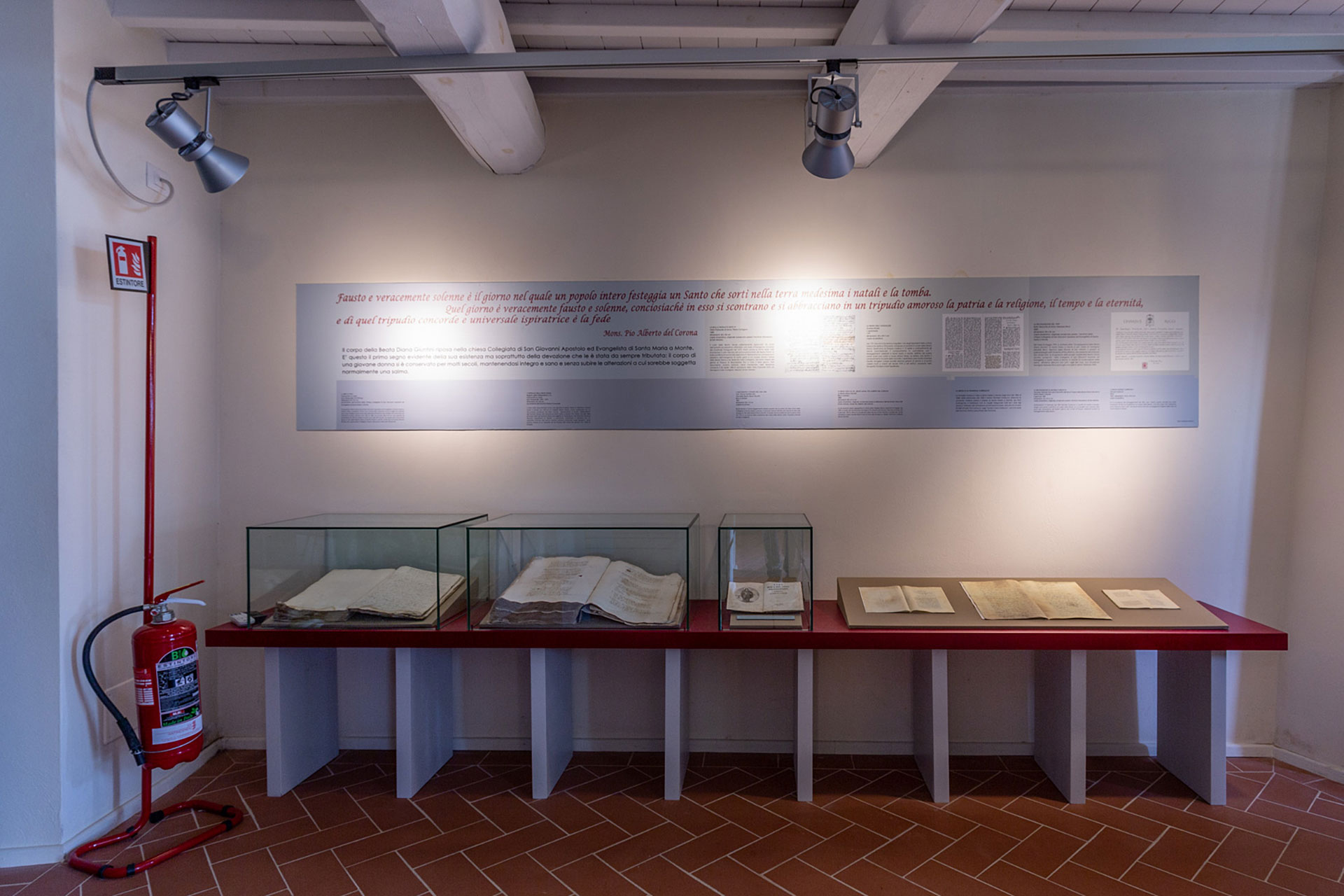 Description of the rooms

The Hall of the Blessed One

The room, which is intimately connected to the historical figure of the “Beata Diana Giuntini” or Blessed Diana Giuntini, aims to unravel the biographical history of the patron Saint celebrated in the traditional Procession of the Basket every Easter Monday.
Among the many precious objects, and in addition to the songs written by Giosuè Carducci in 1857, the museum exhibits the “Golden Book” which is a register collecting the most significant religious documents of the parish from the 15th to the 18th century and containing the main source material from which it was possible to reconstruct the young girl’s life and works in the ‘Life of the Blessed Diana of Santa Maria a Monte, written by Can. Giovan Battista Dini in 1713.
The visitor can also admire both the wonderful 14th-century document that mentions a hospitali Beatae Dianae(a hospital of the Blessed Diana) and also the only pictorial work that portrays the Blessed Diana: the oil on canvas painted in 1734 by Antonio Domenico Bamberini, an artist of the Florentine Baroque period active in the Diocese of S. Miniato in the first half of the 18th century.
Finally, in its coverage of the most famous manifestation of the tradition – the miracle of the transformation of the bread that Diana wore in her apron into roses and flowers – the exhibition aims to retell this story with a modern slant by including within the visitor routeterracotta ceramics by Nello Bini and the painting by Antonio Possenti.

The Hall of the Coat-Of-Arms

The room brings together the coat-of-arms of the municipality of Santa Maria a Monte, the Virgin and Child Enthroned, seen both in its current version and in its 15th-century guise, with the medieval statue of the Madonna and Child, a painted and gilded wooden sculpture preserved in the Collegiate Church of Santa Maria a Monte. In fact, there is a clear derivative relationship between one of the most precious and ancient works of art in the area, dating back to 1255, and the one that later became the civic symbol of the community.
In the same room there is a statue which, though unfortunately headless, is nevertheless a rare piece of evidence of Tuscan sculptural art of the late 12th century. It was perhaps originally used as a lectern for the pulpit of the ancient parish church Pieve di Rocca and it can now be seen in the Collegiate Church. Discovered after the collapse of a portion of the fortress in 1950, the statue probably represents a Prophet from the Old Testament and was attributed to the school of Master Biduino.

The room also offers a 3D video just a few minutes long, so that visitors travel back in time to understand the different phases of the life of the area’s two settlements – one on the plain at Sant’Ippolito and the other on the hill at the castle of Santa Maria a Monte. The reconstruction starts from the Etruscan era, characterized by the landscapes of water created by the meandering Arno and Usciana. It then moves on to the Roman Imperial and late antique eras, when the two rivers marked the outer limits of the centuriation (Roman Grid land division), in which the structures at Anniano were laid down while vibrant trade thrived on the river itself, encouraged by the road that ran along the right bank. The video finishes with the Medieval Era, when the territory was organized into the system of castles, and in the plain, following the disappearance of the settlement of Sant’Ippolito, the landscape distinguished by the moorings along the river and hills planted with vines, olive trees, and cereals.
Evidence from the Etruscan period includes the display of the stone from the Sant’Ippolito in Anniano area datable between the 6th and 5th centuries BC, which was originally used as a tomb stone and belonged to a necropolis of Etruscan era, perhaps located in the area of Sant’Ippolito.

The first floor is dedicated almost completely to the archaeological visitor route as the rooms, in addition to visual interaction, give access to the Rocca Fortress.
The first room illustrates the Roman and late antique era. The excavation in the flat area of Sant’Ippolito, in addition to showing us the structure of the landscape with the fields logically laid out to produce crops and income from cultivated land, has also enabled us to reconstruct part of a factory of Roman times which produced wine, and in particular, the buildings used for pressing grapes. The exhibits include finds relating to the life of the settlement in the early Roman Imperial era, with objects related to the tasks of daily life.
Between the late Roman Imperial era and the early Medieval Era, a religious building with a cemetery was built on the site, belonging to a rural settlement that has not yet been identified. The second room focuses on the cemetery that was formed around the church and that continued to be used even after the transfer of the plebs to Santa Maria a Monte. The showcase contains a reconstruction of the only tomb discovered intact complete with all its grave goods dating from the middle of the 6th and 7th centuries. The grave was that of a woman whose mortal remains were adorned with two bracelets, one in bronze and the second one made up of amber beads.
The sarcophagus closed by a slab of slate was instead used to accommodate child burials perhaps belonging to prominent families in the town. Signs inside it of its having been worked upon suggest, however, that this artifact may have had previous different uses before it was placed near the church of Santa Maria.
The visit continues with the Medieval period, to which are attributable the architectural remains relating to the decoration of the religious building built on the fortress.  Indeed, an oraculum dedicated to Santa Maria Assunta and dependent on the parish church of Sant’Ippolito in Anniano is already attested from the 8th century. Around this building there grew up an inhabited area which over the years led to its transformation into a fortified village and the consequent domination by the fortress of the Rocca on the site of Sant’Ippolito. Finally, the church was enlarged between the 11th and 13th centuries but then dismantled in the middle of the 14th century because of the construction of a fortification by the Florentines.

Via Cimitero – Santa Maria a Monte