The archaeological excavations carried out on the Rocca fortress since the mid-eighties of the 20th century have revealed a real “palimpsest”, on which there were numerous phases of construction typical of the site’s historical development. Starting from the display of a pre-Roman settlement (8th to 1st centuries BC) as evidenced by the postholes ascribable to hut dwellings, the visitor then moves on to the principal religious building of the village – an 8th century Lombard oraculum dedicated to Maria Assunta and originally dependent on the parish church of Sant’Ippolito in Anniano, dating back to the 4th century and situated on the plain along the course of the Arno. During the Carolingian period (9th century) the church was then equipped with a second pulpit, to the west, dedicated to St. Genesius, a saint much revered in Lucca. Inside the apse, in the central axis with respect to the curvature of the wall, the excavations have uncovered a high-status burial, probably of a member of the Lombard ecclesiastical dynasty. Once the title of parish church had been obtained around the middle of the 10th century along with the transfer of baptismal prerogatives from Sant’Ippolito, as confirmed by the presence of a font, and also with the establishment of a proper rectory (10th century) made up of 14 clergymen, it then became necessary to build an extension to the church towards the east, traces of the triapsidal transept of which still remain. After a further expansion of the building around the end of the 12th century, the church was partly dismantled in the mid-14th century, when the Florentine rule had become more established.

The area of melting furnaces and baptismal fonts

The excavation has revealed the layout of a Lombard oratory with a single rectangular hall, measuring 23 x 11 m, with a semicircular apse pointing out towards the east with an internal diameter of about 4.5 m. Initially erected by the priest of Sant’Ippolito, this structure, rather too big considering the function for which it was built and the period when it was built, should be understood in the context of a gradual and slow shift of the axis of settlement away from the plain, along the rivers Arno and Usciana, towards the hill of Santa Maria a Monte, which was becoming ever more well developed. It was precisely between 941 and 983 that the baptismal prerogatives were moved from Sant’Ippolito to Santa Maria a Monte. The transfer of title of ecclesia baptismalis to the church of Santa Maria was confirmed by the construction of a baptismal font with an octagonal exterior and circular interior, just over half of which is well preserved. A second baptismal font, found a little further north, cuts the 10th century font in half with its foundation, and for this reason it has been attributed to the Romanesque phase of the restoration of the church (1189-1200). In the area adjacent to the oldest baptismal font, excavations have brought to light a series of melting furnaces attributable to an intense period of bell construction in foundries. The foundry’s infrastructure was discovered under the flooring of the ancient parish church. It dates back to between the middle of the 10th century and the end of the 12th century and consists of numerous pits dug into the bare earth. At the beginning of the 11th century, the power of the bishops of Lucca had been growing to such an extent that, as a result of the promotion of the oraculum of Santa Maria a Pieve, Bishop John II implemented the principles of the Gregorian reforms’ restoration of clerical customs and established in Santa Maria a Monte a regular canonry consisting of fourteen clergymen, including priests, deacons and clerics, who resided within the church. The buildings sanctified for worship and the canonical annexes, such as the cloister, refectory, dormitory, and the capitular hall all undoubtedly required more space and structural work to expand or adapt the existing buildings. Unfortunately, no traces of the canonical annexes have been preserved due to a landslide of the northern half of the fortress in 1950. On the other hand, there are still considerable traces of the restoration of the church that the archaeological excavation has brought to light. The building work of the first quarter of the 11th century did not change the structure of the Lombard church. However, the eastern apse was demolished to make room for a large crux commissa style transept continuing eastwards out from the nave, with three apses and arranged on two levels. The lower one was in effect really a crypt with an oratory divided by cross vaults supported by eight small columns; access was by two narrow ramps and its apses still preserve the three original altars. Most probably the Madonna and Child was preserved in the crypt. In gilded wood and dating from the mid-13th century, it is now visible in the Collegiate Church in the historic center of Santa Maria a Monte. In the latter, there are two other items from the original furnishings of the ancient parish church: the marble pulpit by master mason Guidetto from Lucca resting upon column-bearing lions (late 12th century) and the wooden crucifix attributed to the Master of the Crucifix of Camaiore (first quarter of the 14th century).

The most obvious rupture in fortress’s buildings’ history occurred in 1327 when, in the wider context of the heated conflict between the Guelphs and Ghibellines, Santa Maria a Monte, then still within the sphere of influence of Guelph Lucca, fell to the Florentine army, which occupied and razed the parish church of the Rocca fortress, together with all the buildings belonging to it. From 1335 the Florentines then proceeded to reconstruct the fortress on top of the hill and three perimeters of the existing defensive walls in order to ensure control of the area. And it was in this specific context of Florentine redesign of the castle area (including the original parish church) that the medieval quadrangular cistern, dating back to the Florentine reconstructions of the 14th century, should be included. Mentioned in the Statute of 1391, the cistern was designed and built for the purpose of storing drinking water, a key item for the military garrison that had to be able to withstand possibly prolonged sieges by their enemies. Originally, this building had to be buried a few metres underground, as can be deduced from the presence of the adjoining well for water adduction/collection. This last small structure, of almost cylindrical shape, was built using a mix of techniques by applying a single layer of building material against the virgin rock, although the part that stood proud from the ground had to be more robust.
A second medieval cistern can still be seen today in the municipal library. It exploited the natural cavities of the tufa that makes up the internal stratigraphy of the hill and was used, unlike that of Rocca fortress, to meet the needs of the entire population due to its location on Corso Carducci, the main street of the village. 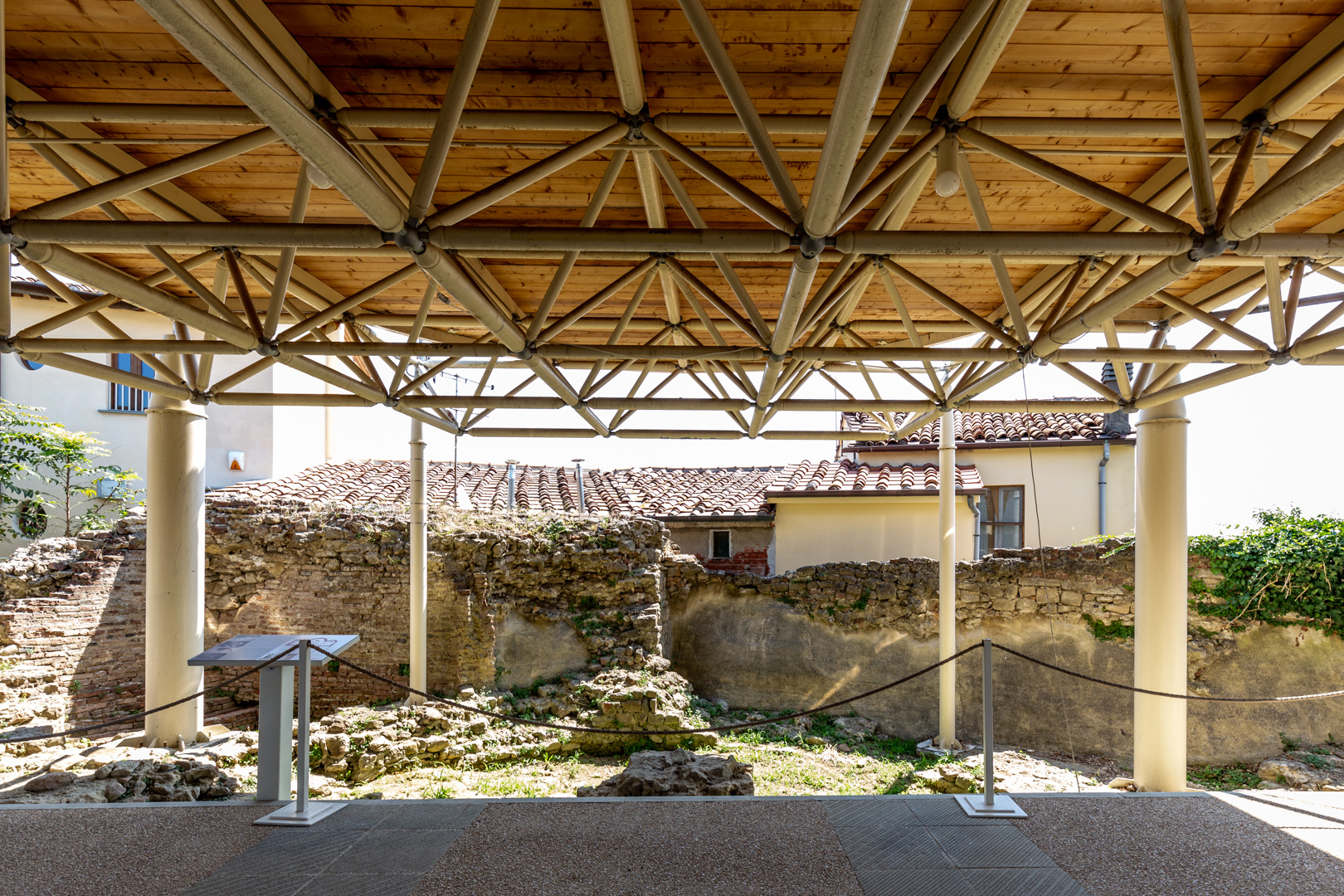 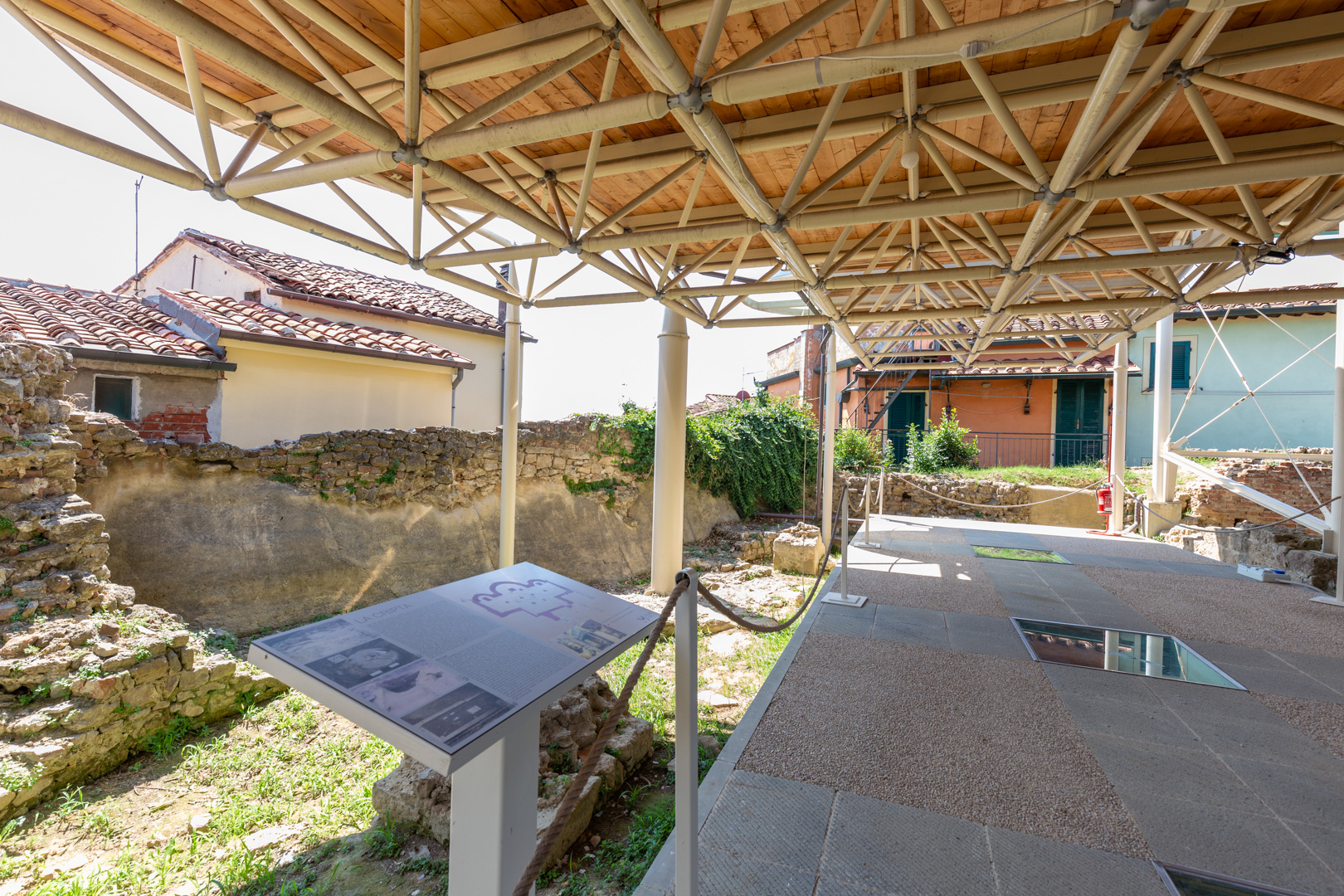 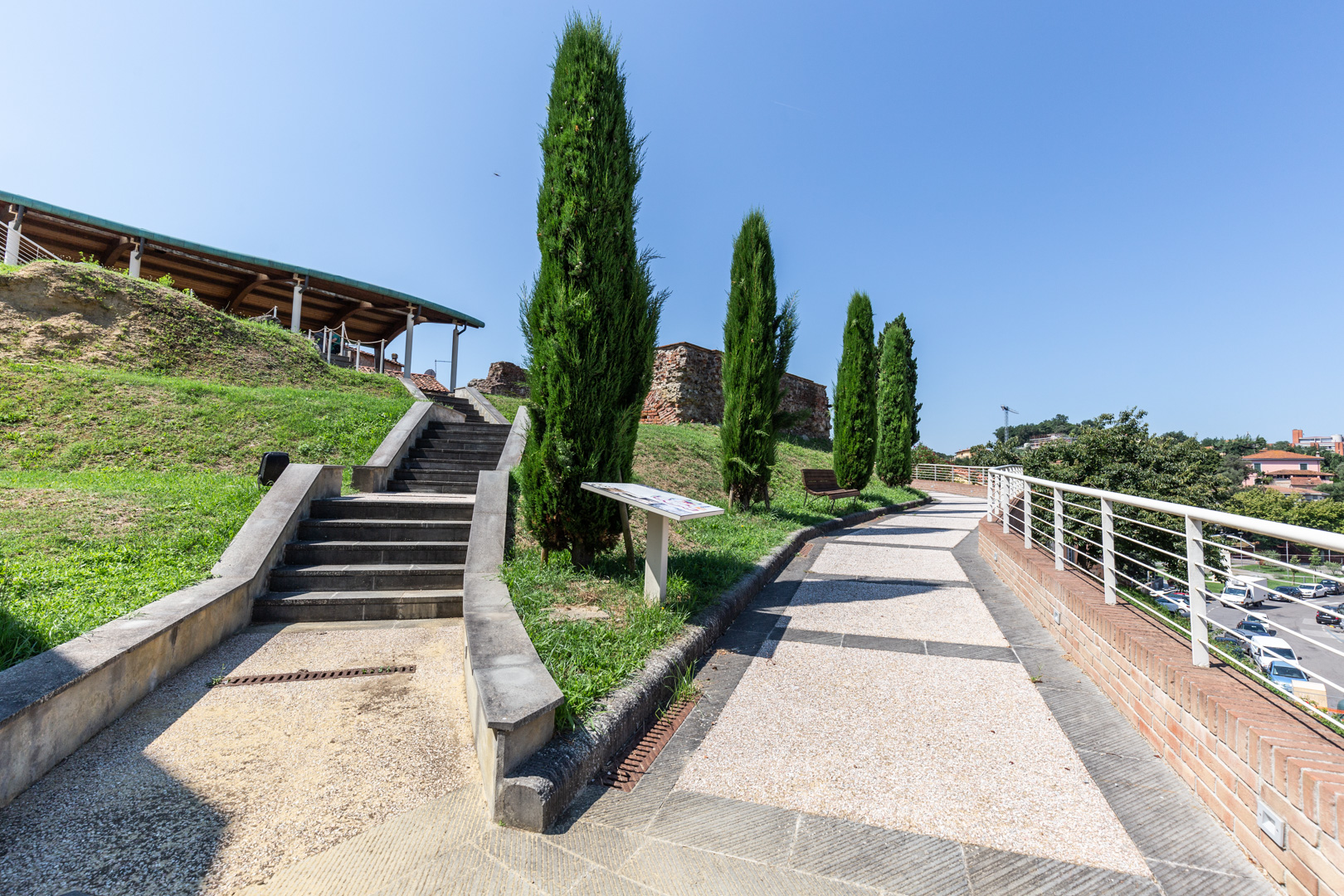 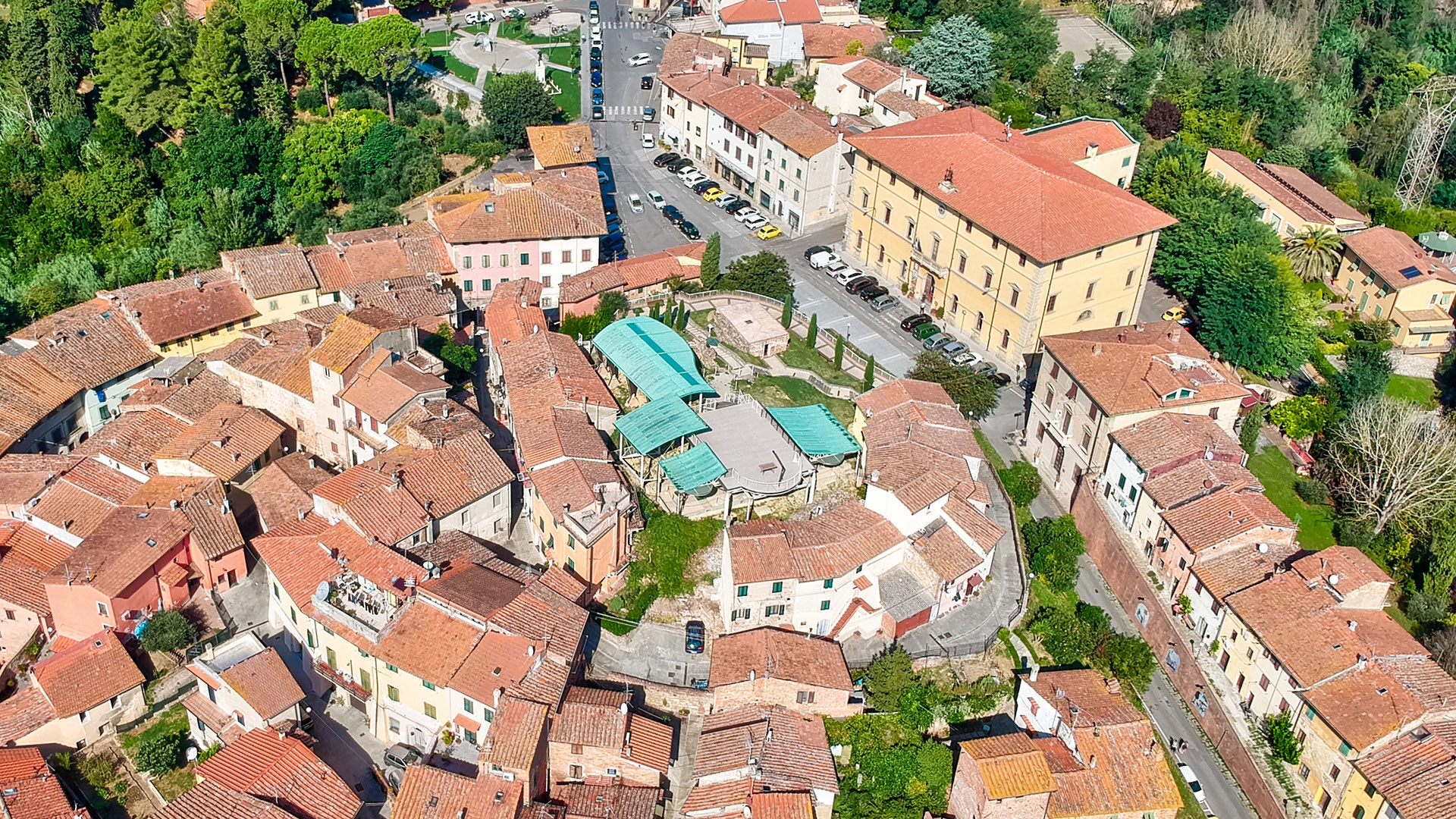 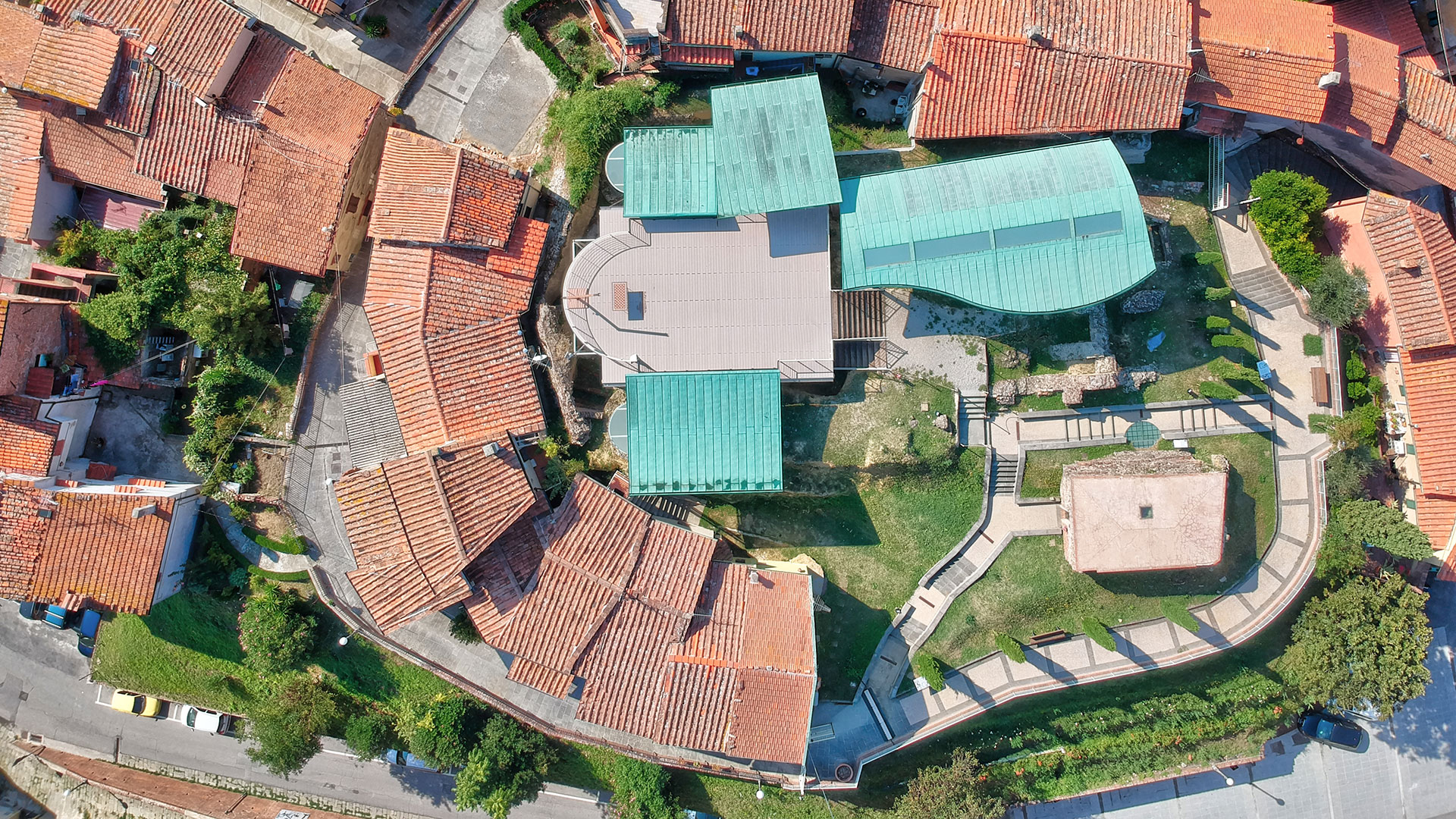 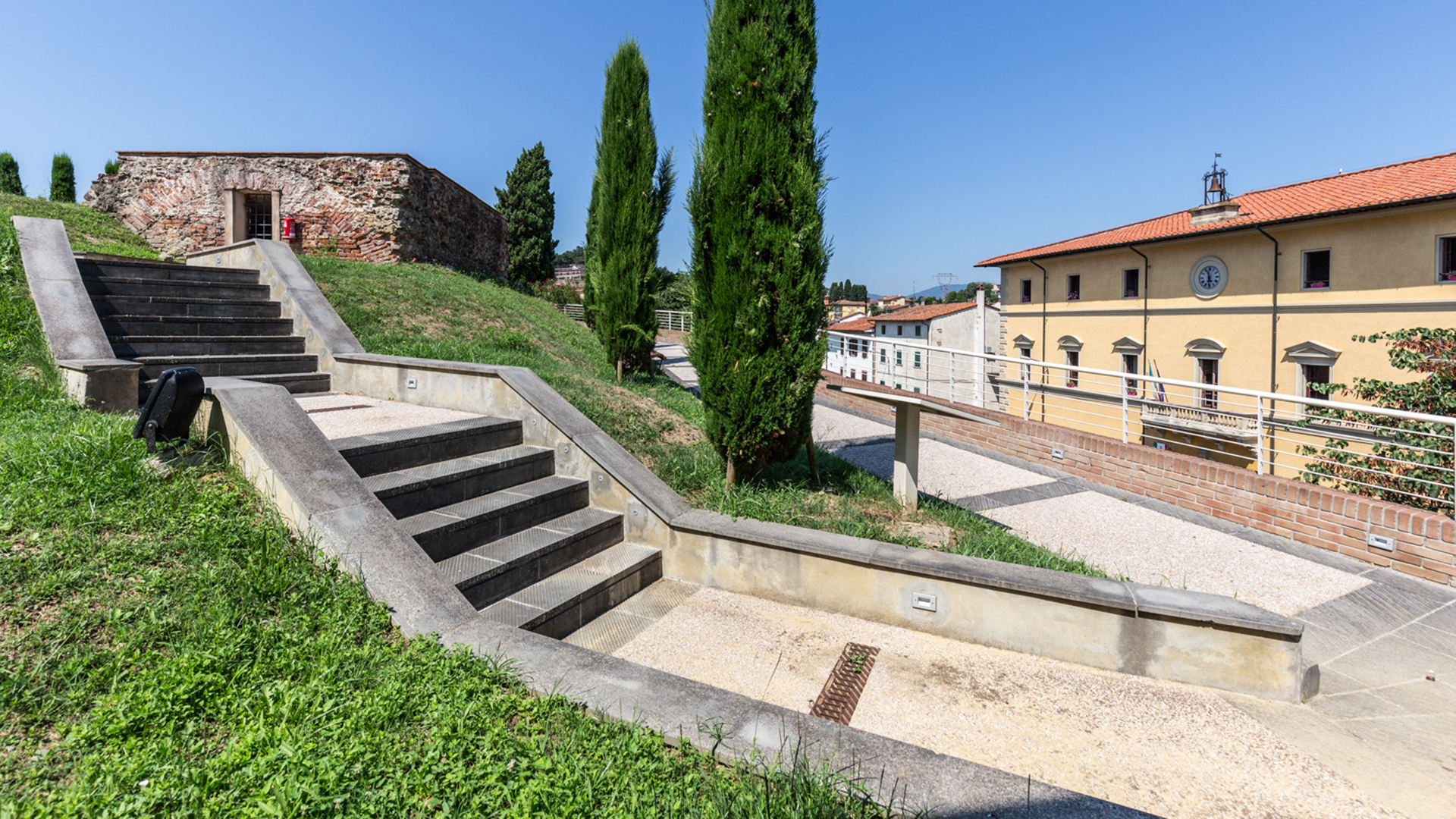 Via Cimitero – Santa Maria a Monte