Founded in 1969 was reopened in 2004 in its new location in the Palazzo Corsini next to a large park that preserves the remains of the early medieval castle of Salamarzana and the 14th-century Rocca Fiorentina Fortress. The collections are arranged over three floors of the Palazzo in three sections: Archaeology, Historical-Artistic, and Natural History.
The Natural History and Archaeological Collections enable us to trace the history of the natural and human environments from the end of the Tertiary to the Modern Ages between the eastern side of the Cerbaie, the lower Valdinievole and the Valdarno, while the Historical-Artistic Section exhibits a collection of paintings and minor arts from the churches of the town and the collection of works by the Fucecchio painter Arturo Checchi (1898—1971).

The museum has a large auditorium adjacent for meetings, conventions, and conferences. 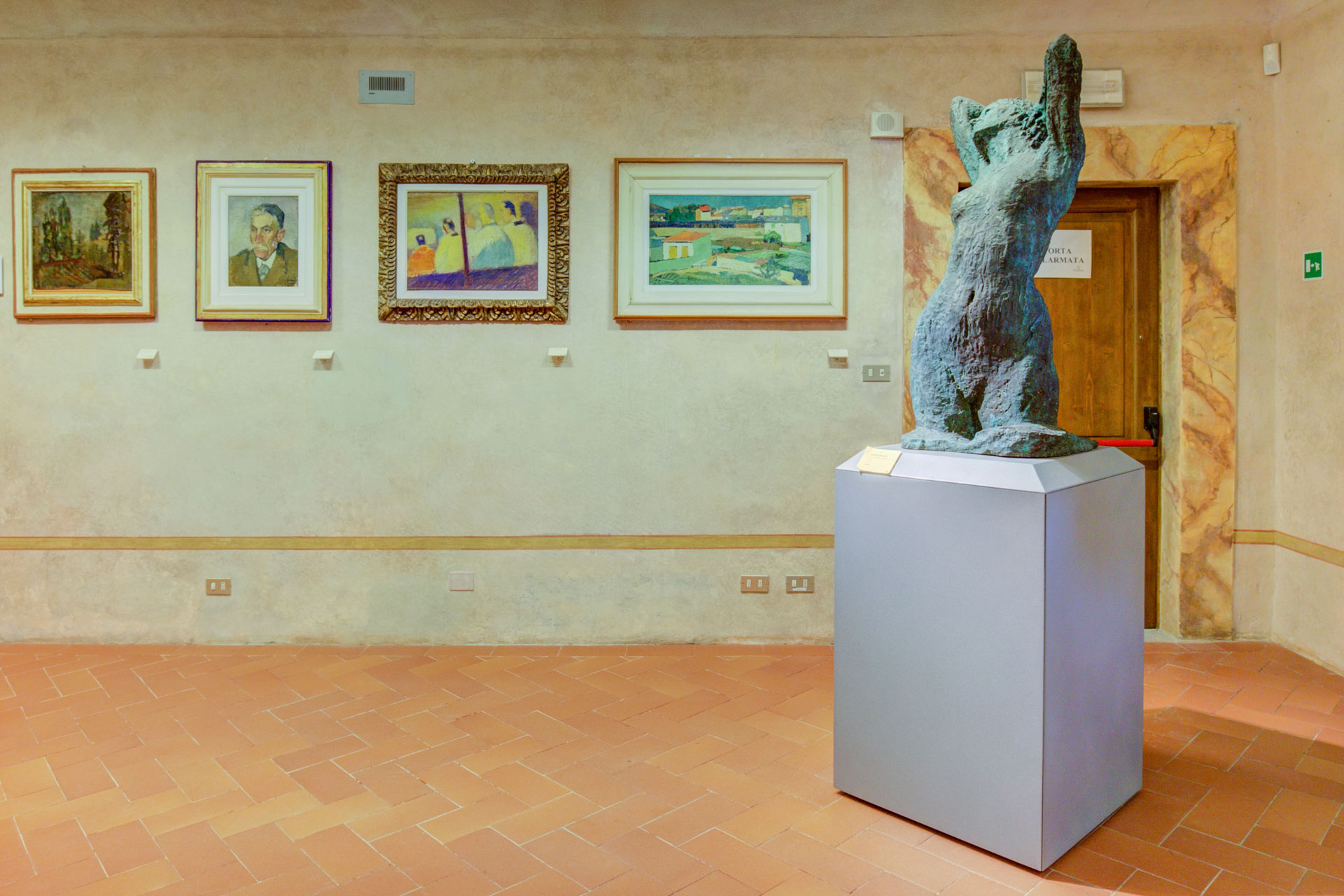 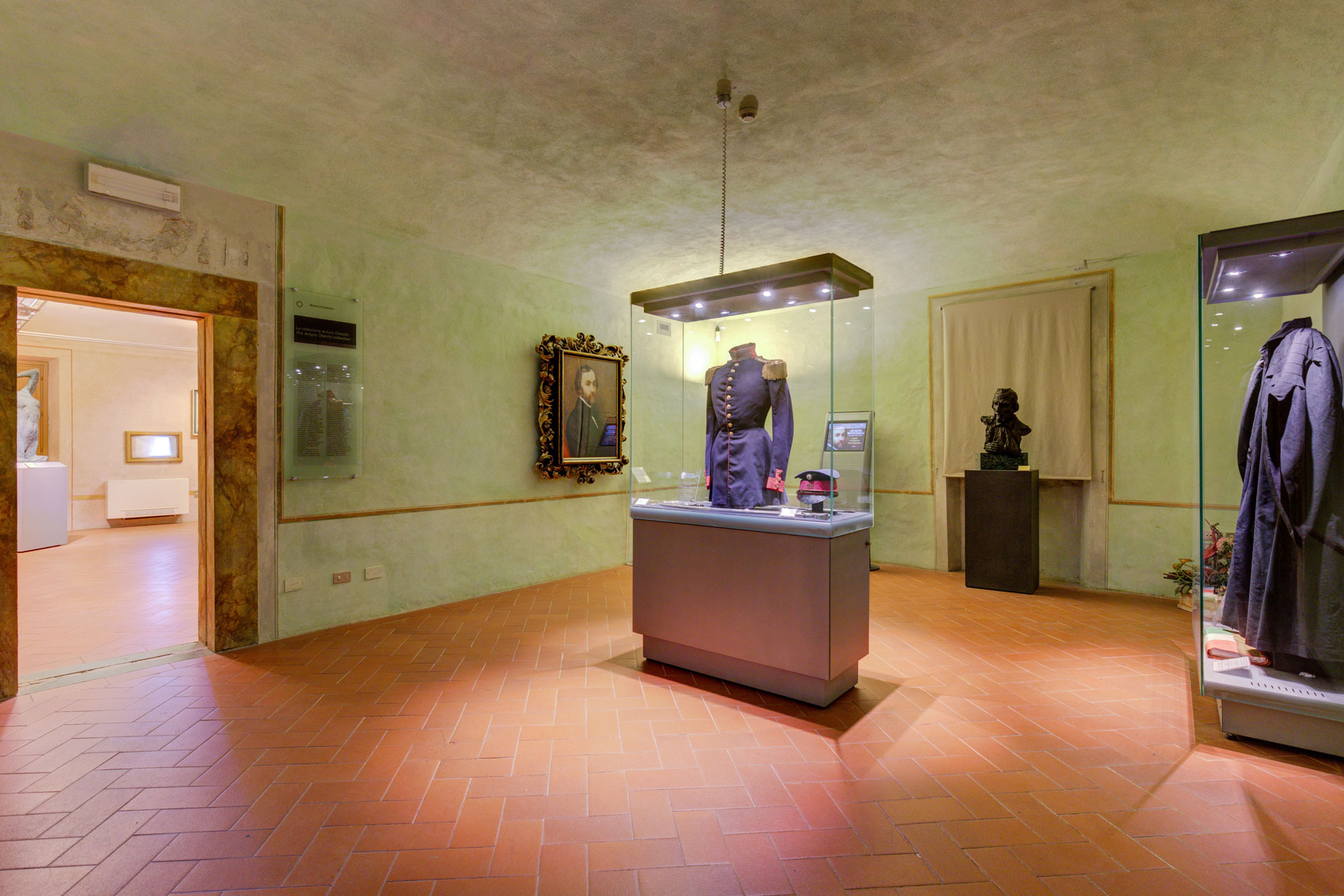 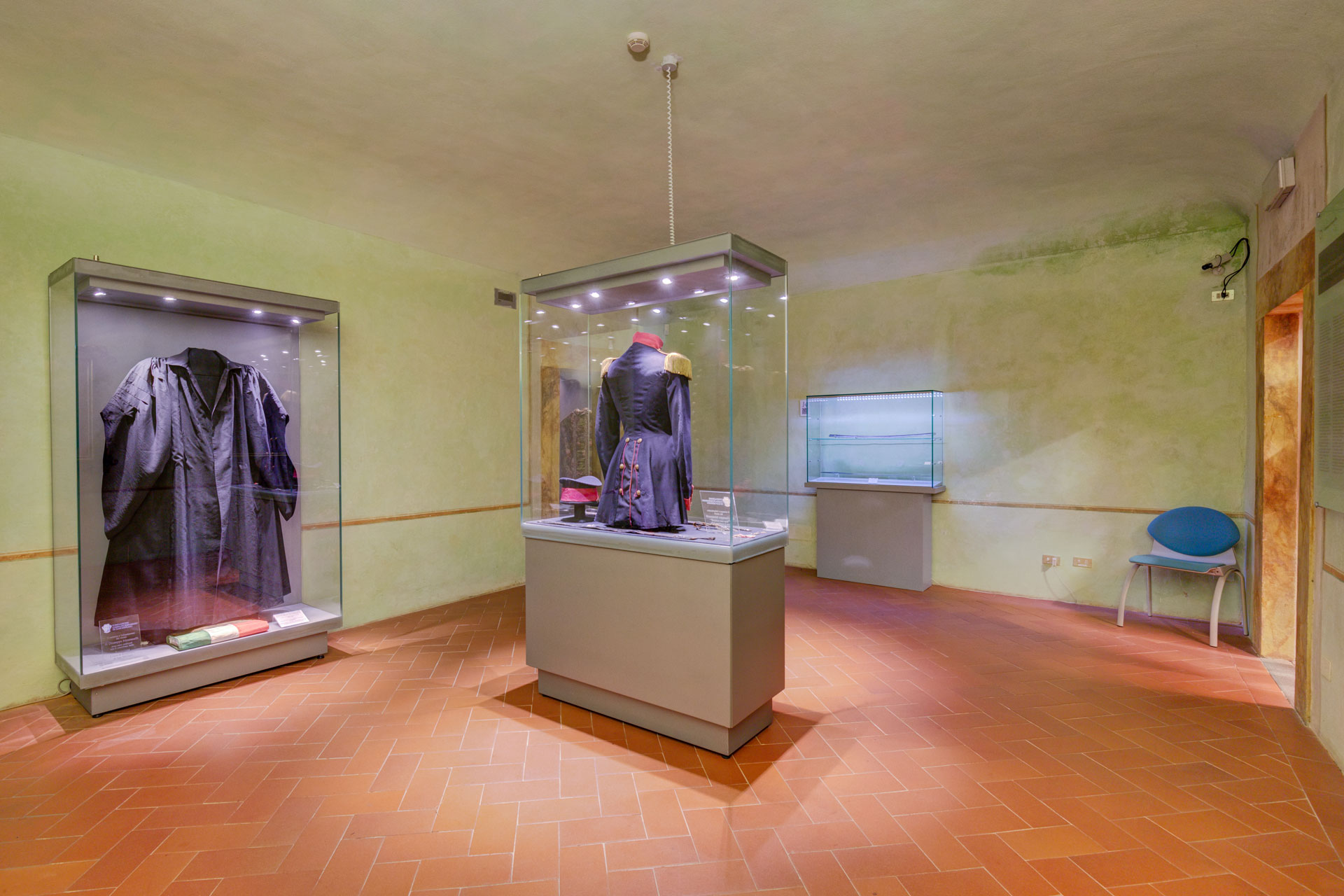 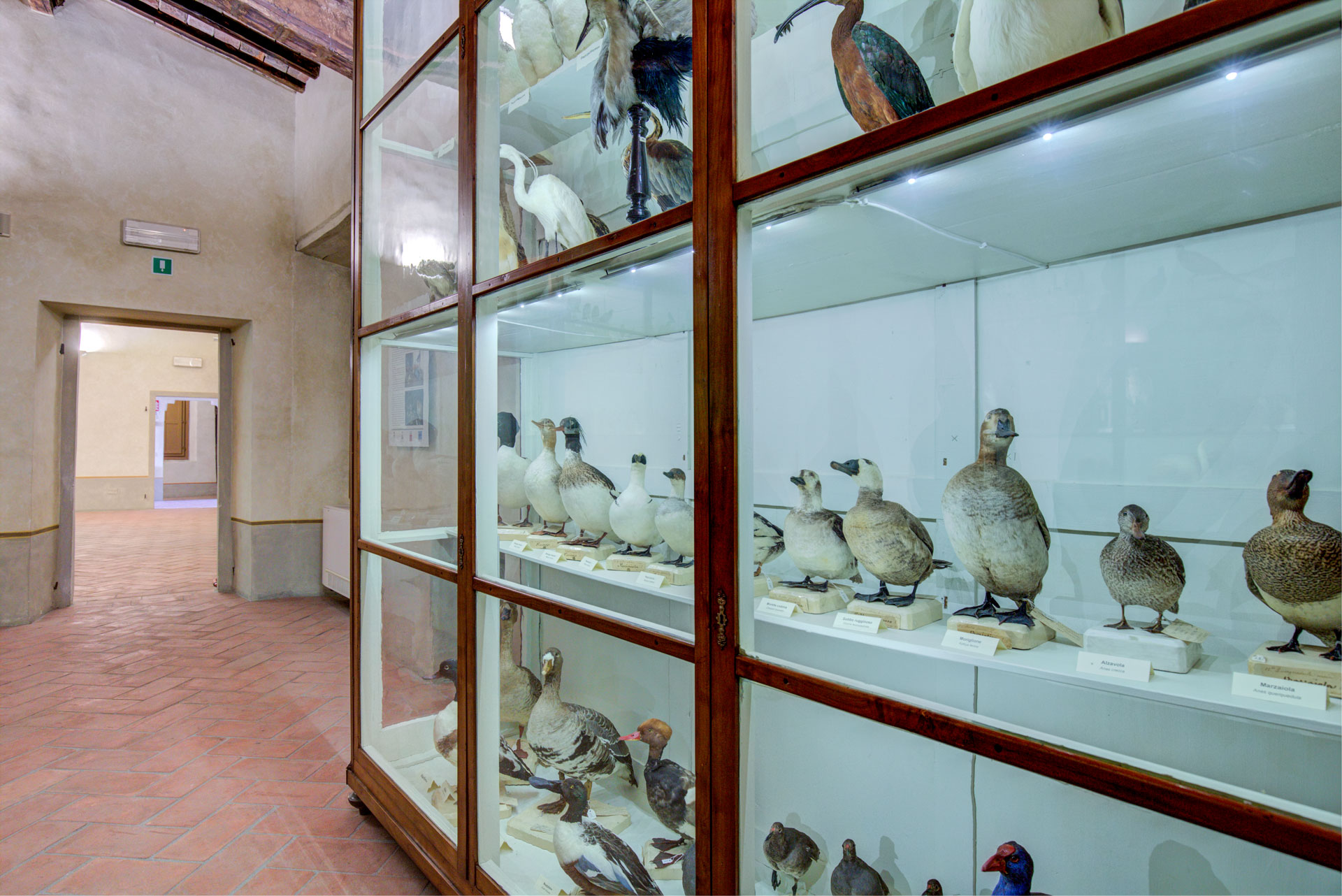 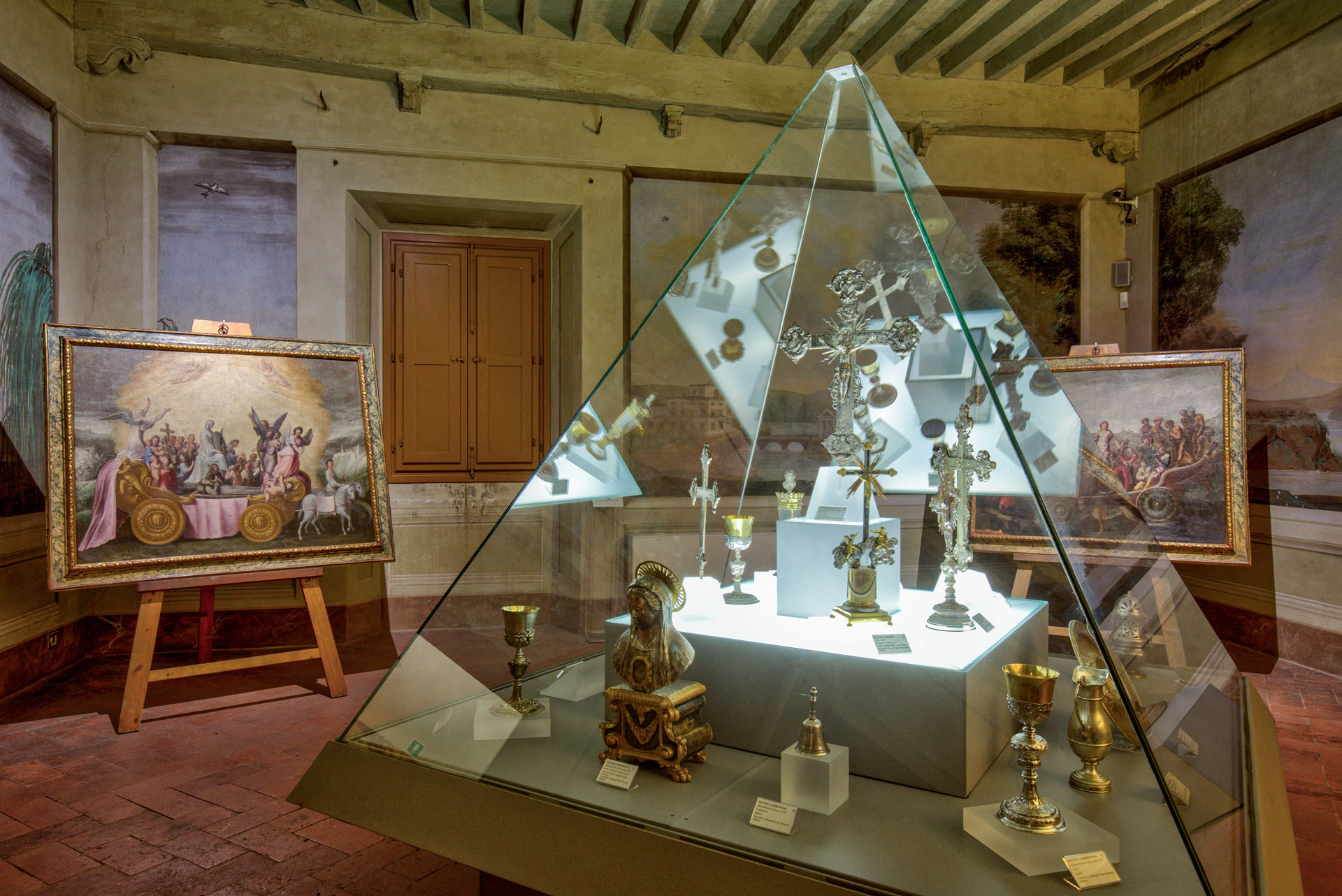 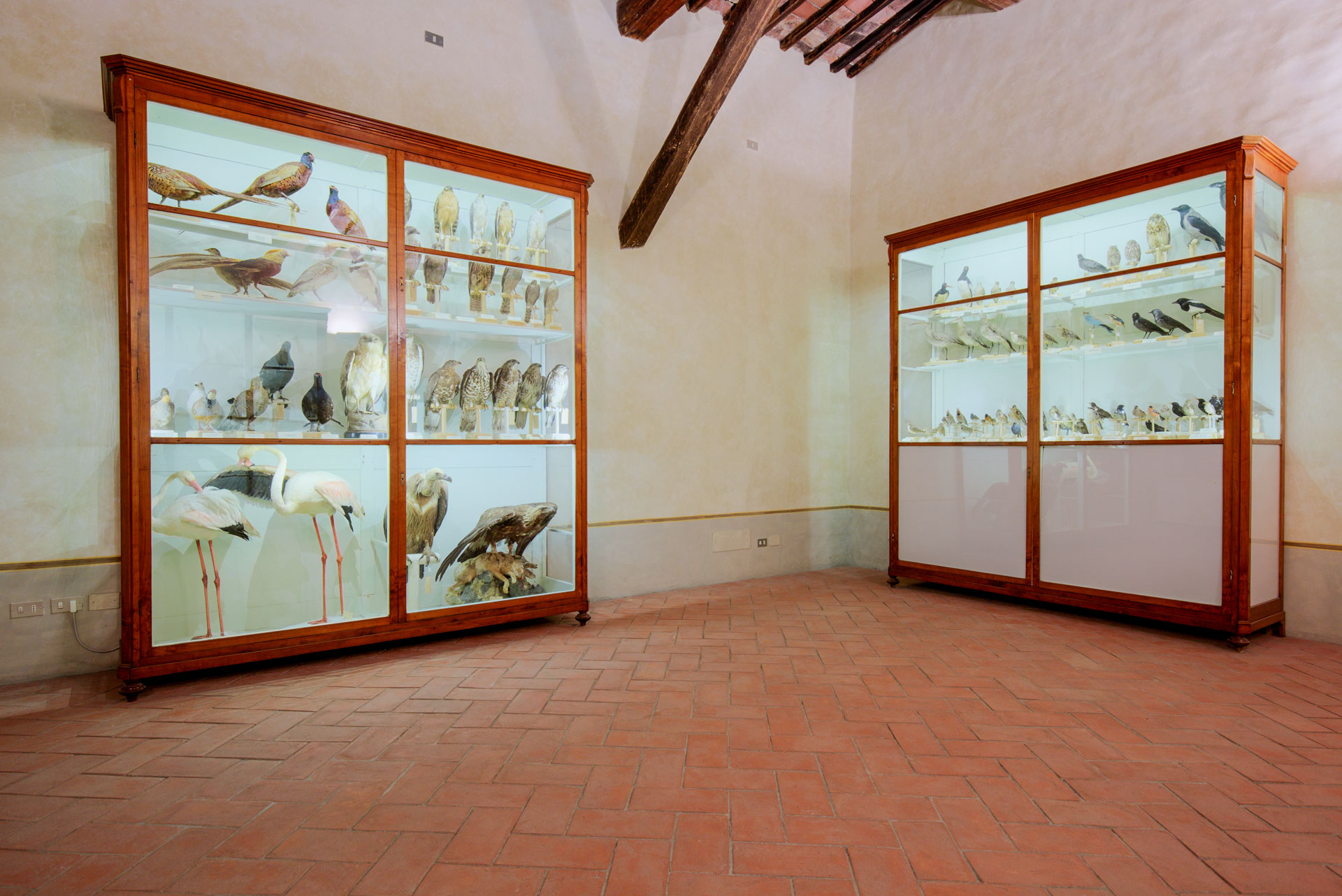 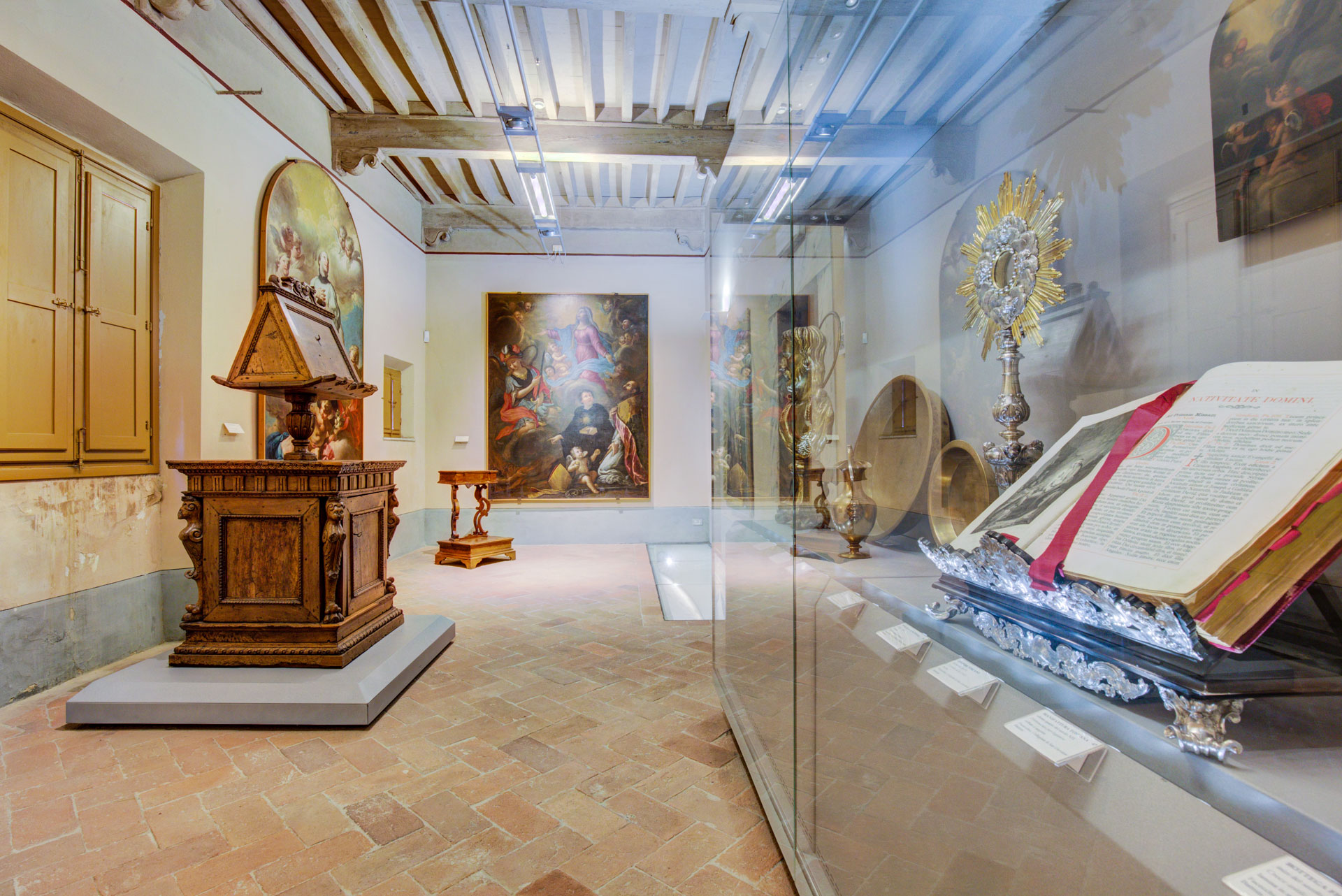 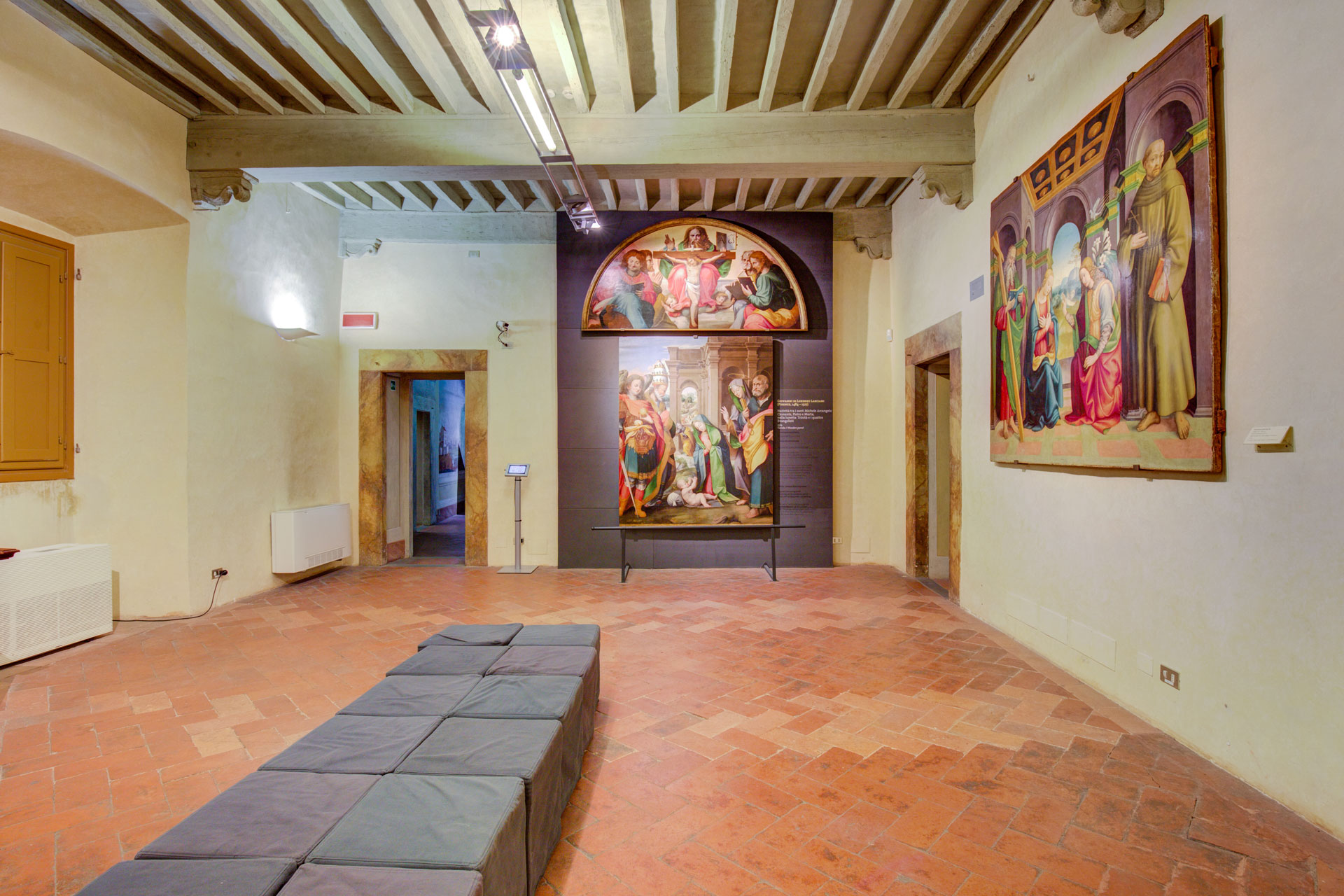 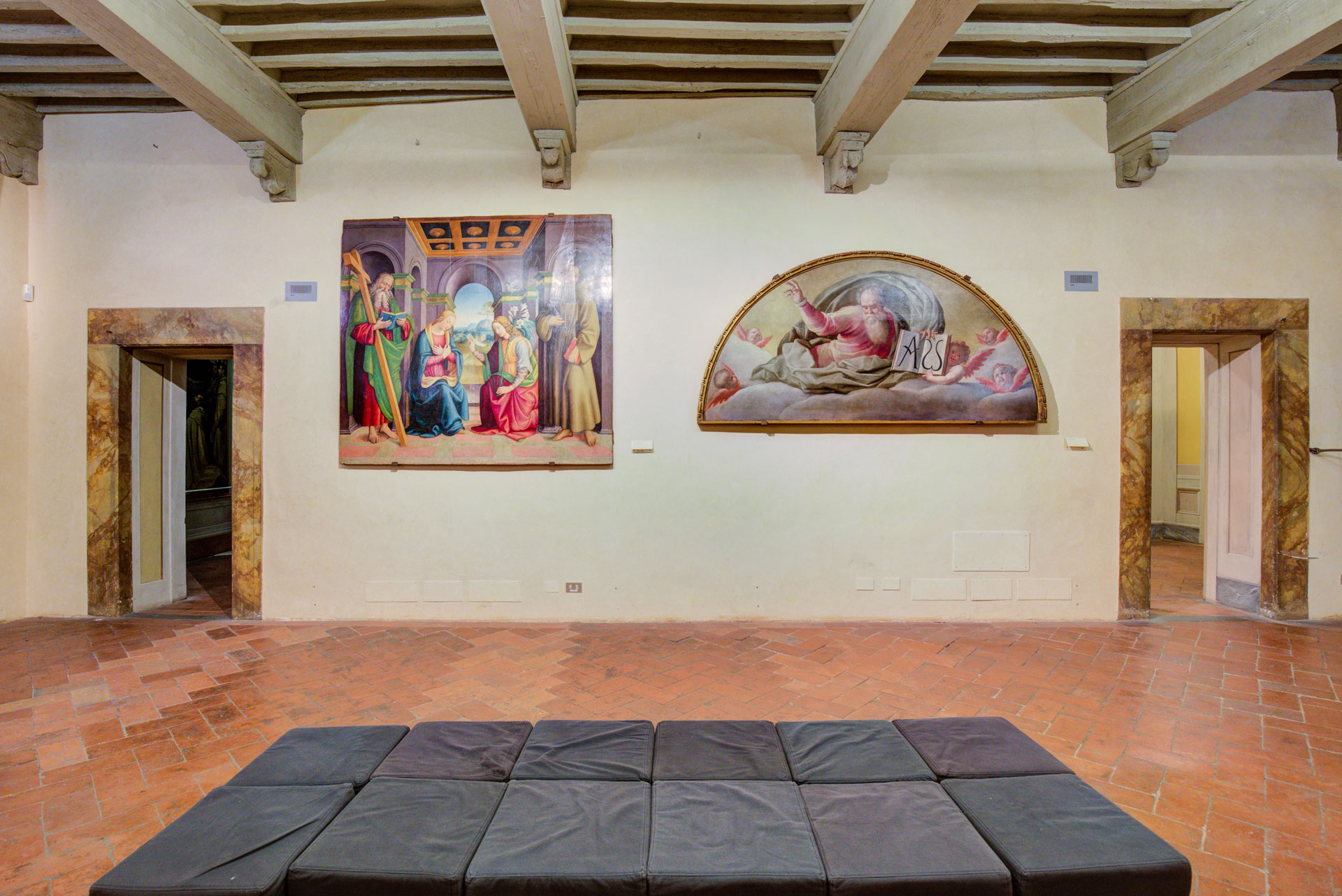 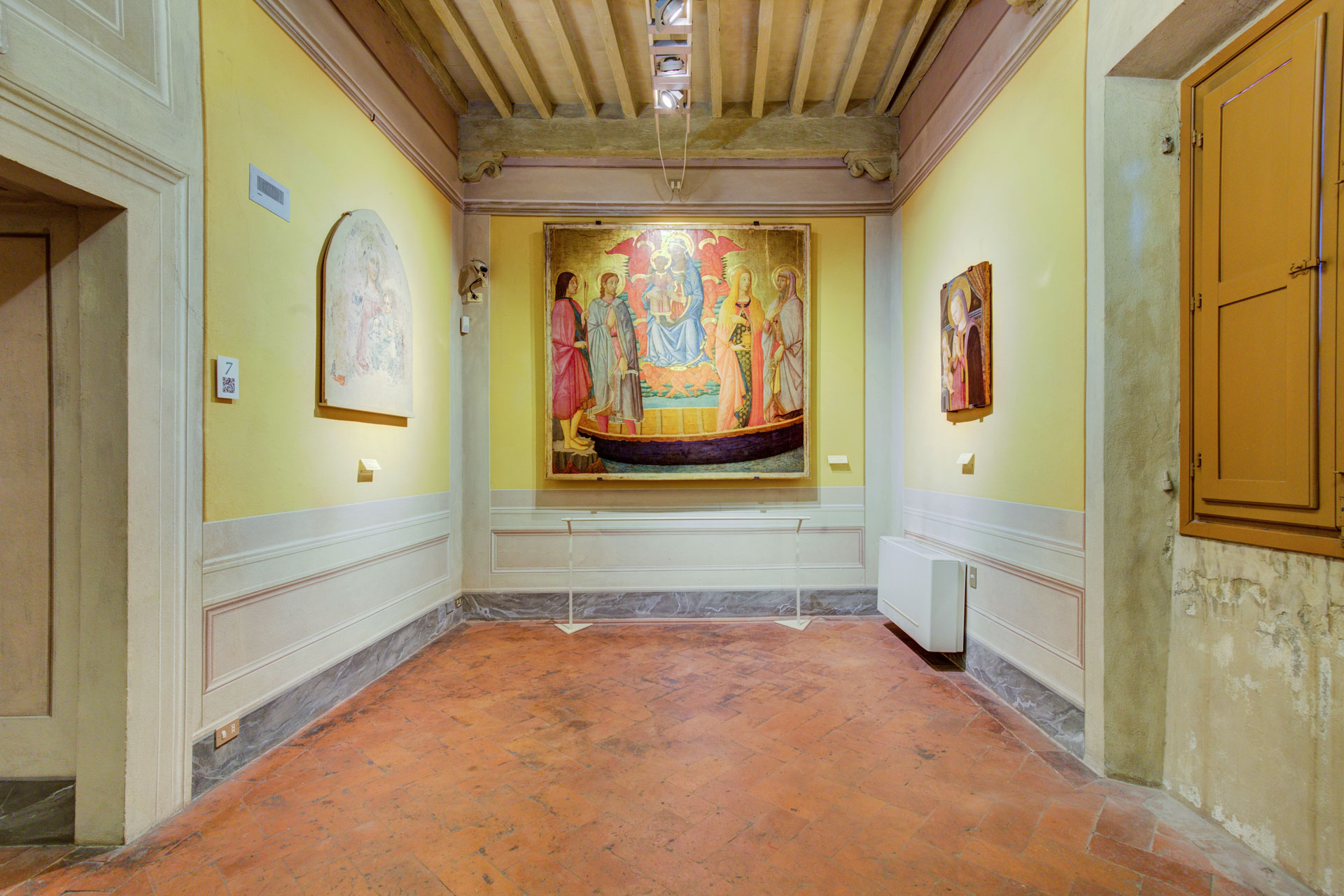 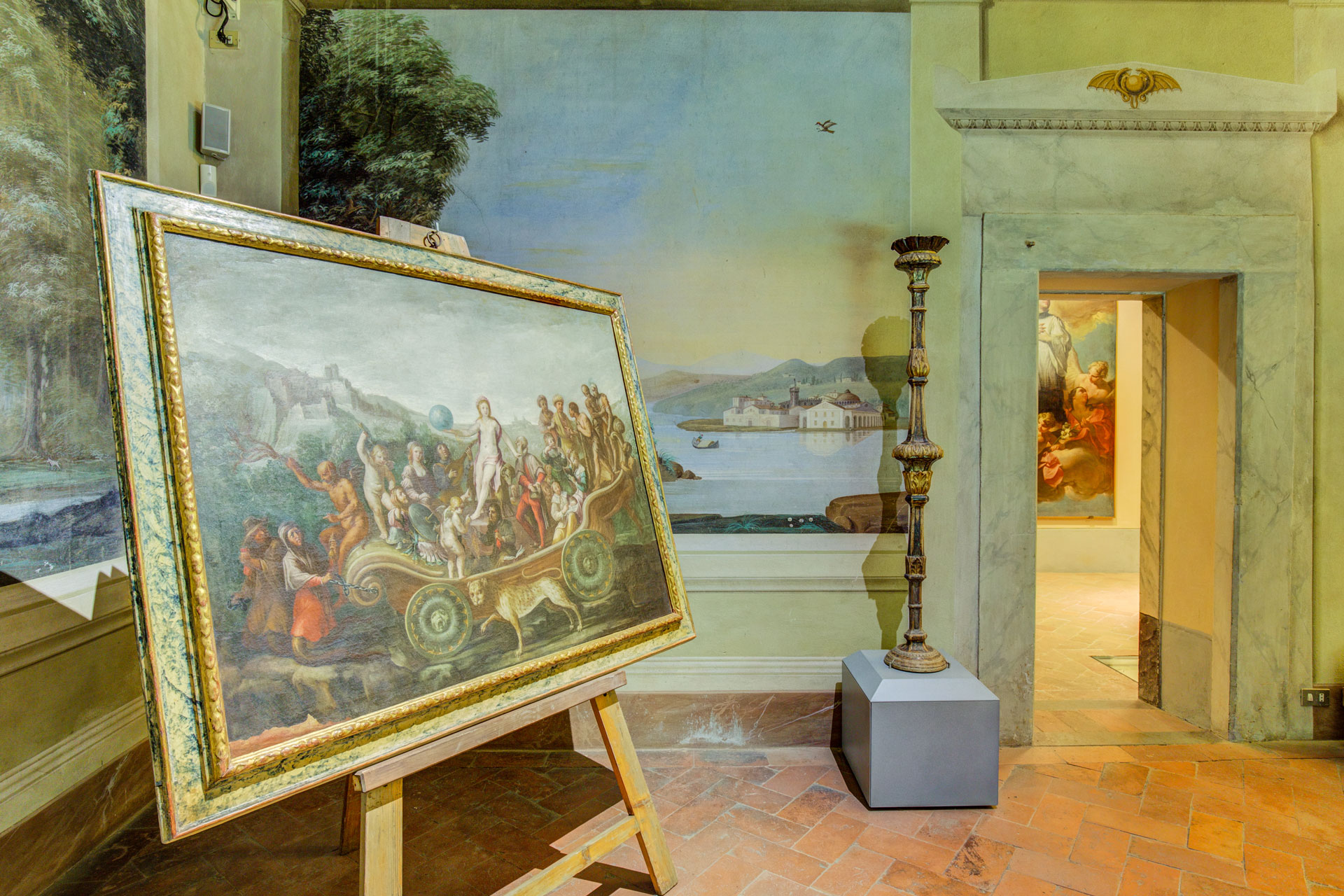 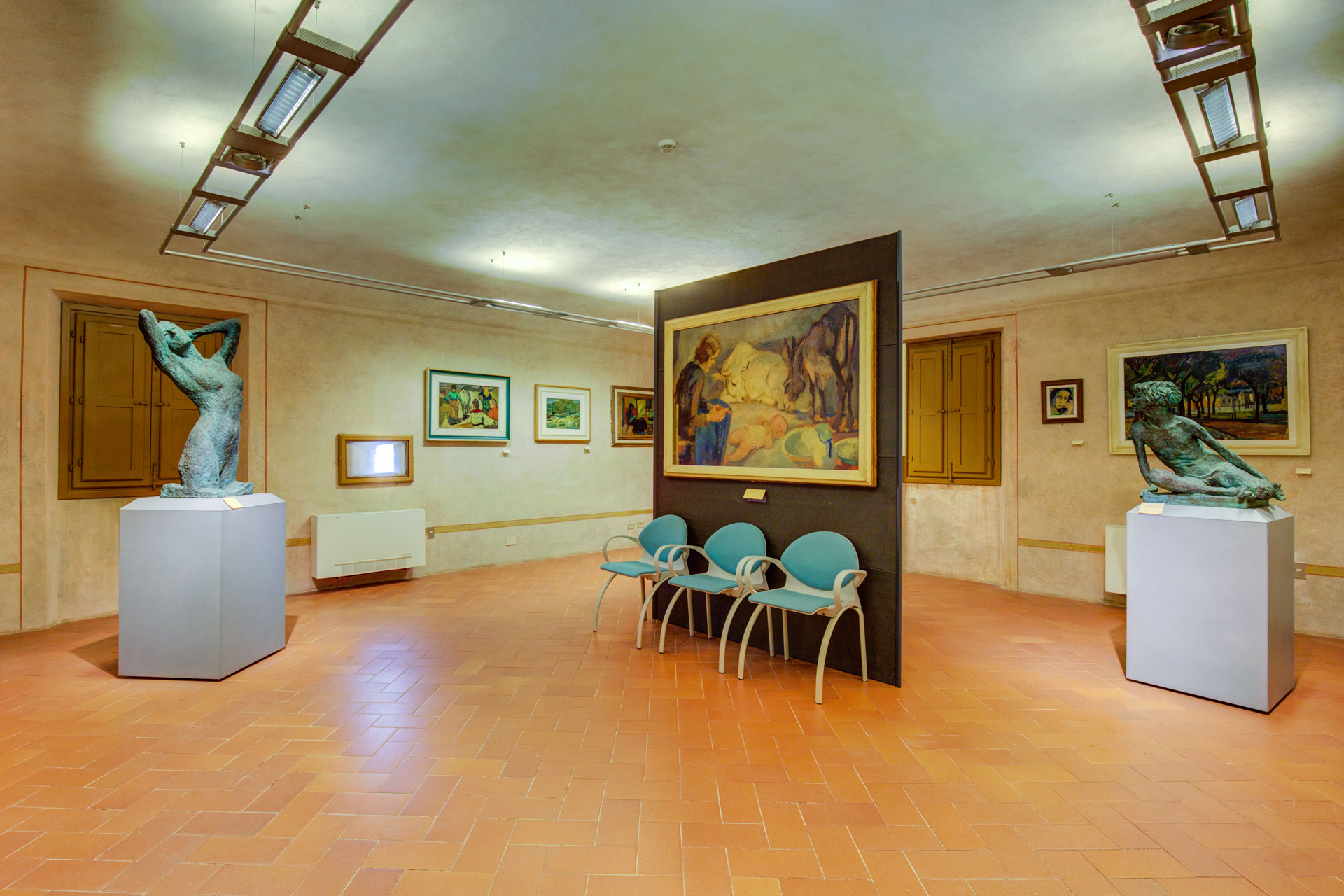 The introduction to area’s development during the Plio-Pleistocene period – documented by marine and continental fossils including the Villafranchian fauna of Tricolle and the recent discoveries of the Macairodontini group (the so-called “saber-toothed tigers”) – is followed by an archaeological display documenting the Palaeolithic period of the Bronze Age. Notable exhibits among these are the unique deposit of Sammartina, a Mesolithic settlement that has yielded hundreds of tools, and the Early to Mid Bronze Age village near the Fucecchio marshes.
The wide time period spanning the Etruscan and Roman eras is at present the least well documented, relying as it does on limited finds and information on now very dated discoveries that document the presence of small scattered settlements. Against this backdrop, the epigraphical finds at Cappiano, which include the funerary of Tiberius Iulius Ianuarius from the first century AD and a marble votive altar, are of considerable importance with regards to the Augustan era.
Then there follows a description of the topography of the Salamarzana of the Cadolingi Counts, of the Abbey of San Salvatore, and of the  a 12th century house, in a surrounding landscape of scattered settlements built of unfired bricks and of a road network (the central axis of which is the Via Francigena).
The display which follows describes the layout of the city centre, its defensive structures, and stately buildings in the age of the Italian Communes, and also uses the archaeological records to give an account of the trade in manufactured goods between the 14th and 18th centuries. Of particular importance is the production of graffito ware which from the 16th to the 19th century supported the economy of Fucecchio. Finally, a new room has been dedicated to the archaeological history of the Arno from Antiquity to the Middle Ages with a rich collection of the different types of amphorae from the 5th century BC to the 5th century AD, the Empoli wreck, and remains of river mill machinery.

The first floor houses the Historical-Artistic Section with its exhibitions of paintings and objects of sacred art, a large number of which come from the Abbey of San Salvatore and the Collegiate Church of San Giovanni Battista, and are dated to between the 13th and 18th centuries. Particularly noteworthy are the paintings by Berlinghiero Berlinghieri from Volterra, Giovanni di Ser Giovanni (also known as Lo Scheggia), brother of Masaccio, Zanobi Machiavelli and Giovanni di Lorenzo Larciani. Minor works of art, including those in ivory and silver from the 12th to 19th centuries, are displayed next to sacred vestments made of Florentine, Venetian and French fabrics of the 17th to the 19th centuries. Two triumphs by Giovanni Maria Tamburini from Bologna and a painting of San Sebastiano by an unknown Venetian artist are also worthy of special mention.

The newly refurbished room has been dedicated to the recently restored relics of Giuseppe Montanelli (Fucecchio 1813-1862), a key patriotic figure and politician of the Italian Risorgimento. These include his Pisa University Guard captain’s uniform and his university professor’s gown, both donated to the City of Fucecchio by his widow Lauretta Parra following his death. In the final room, there is a selection of oils and bronzes donated to his hometown by Arturo Checchi (1898—1971).

The Natural History Collection on the second floor was established between the end of the 19th and the beginning of the 20th century by Adolfo Lensi using specimens he himself collected on the local marshes. These have been added to by the donations of others and include species which are rare or have become extinct in Italy. The display of aquatic birds includes rare species such as the White-Headed Duck, now extinct in Italy, the Sultan chicken, which survived only in Sardinia, and the Ferruginous Duck.

Adjacent to the headquarters of the resident collections there is a large exhibition section on three floors, equipped for temporary exhibitions. Most notable among the exhibitions that have been set up are: