The ‘Palazzo Comunale‘, or Town Hall, the current seat of the Municipality of San Miniato, has its origins in the early 14th century, when it was used as the residence of the Twelve Lords – Defenders of the People.
The Palazzo was originally composed of a single plot obtained from the typical subdivision of medieval terraced narrow-fronted houses which progressively broadened along their length towards their rear.
The Sala delle Udienze ‘Council Chamber’ (now the “Hall of the Seven Virtues”) was on the first floor, reached by an external brick staircase with a single ramp. On the ground floor was located the chapel (now the Oratory of Loretino) which, from 1399, would house the miraculous image of the Holy Crucifix, subsequently moved in 1718 to the new church built opposite the Palazzo Comunale.

The Palazzo followed the fortunes of the city’s history. From the end of the free Commune to the years of Florentine domination (1370-1500), the Palazzo underwent restorations and expansions that continued over the following centuries to meet both the needs of the central Florentine authorities and the various needs of the administration of the local community.
With the last repairs of April 2008, the headquarters of the City Council was moved to the entrance hall on the first floor, while the historic headquarters, the current “Hall of the Seven Virtues”, is now used as room for ceremonies.

The Oratory of Loretino, on the ground floor, is open to visitors. This was an important place of worship from 1399 onwards when it held the venerated image of SS. Crocifisso. This was moved in 1718 to the opposite building in the sanctuary dedicated to it – the church of SS. Crocifisso. Its place was taken by The Madonna di Loreto, from which derives the current name of the Oratory. A cycle of 15th-century frescoes decorates the walls, while a sumptuous wooden tabernacle from 1529 occupies the back wall. 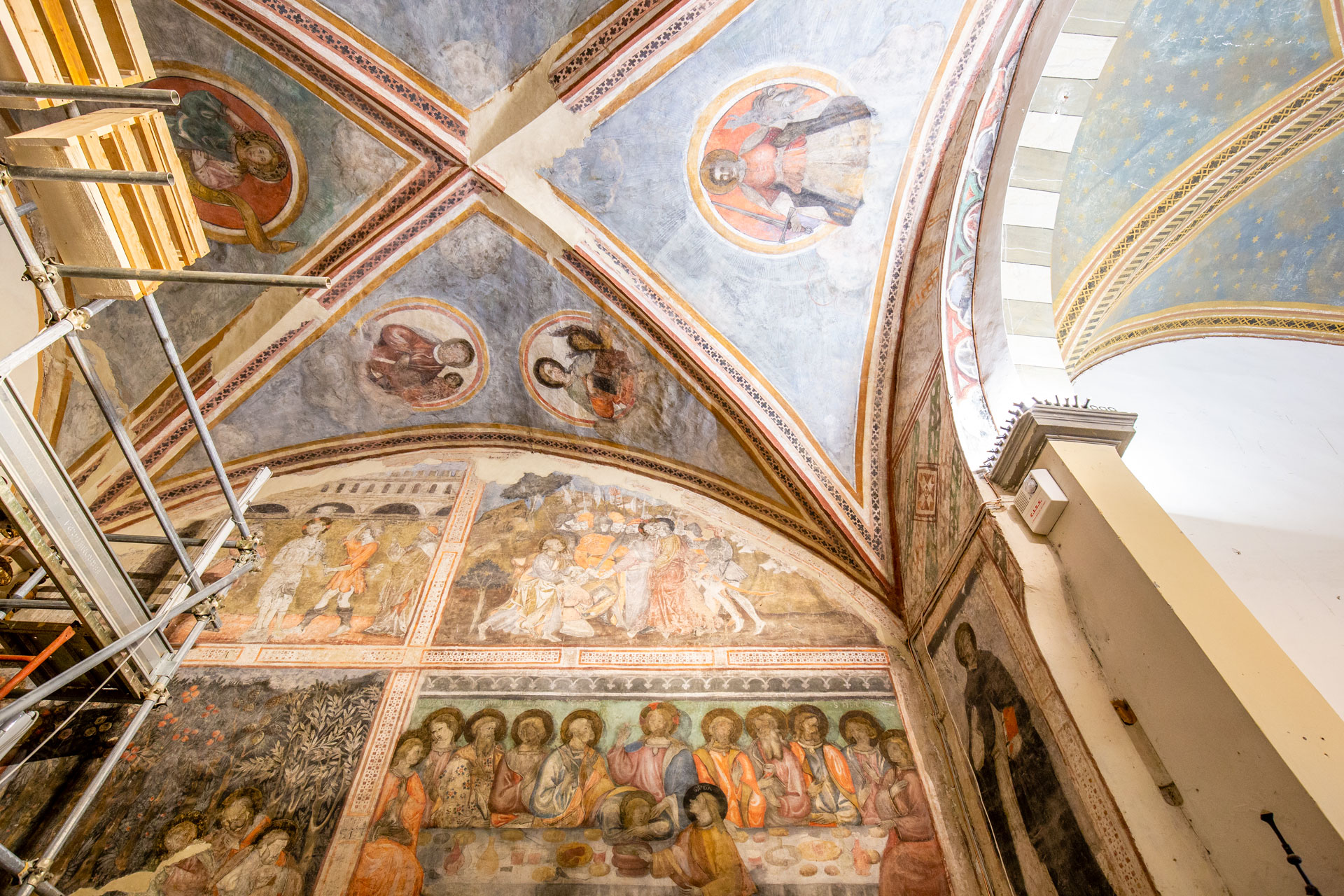 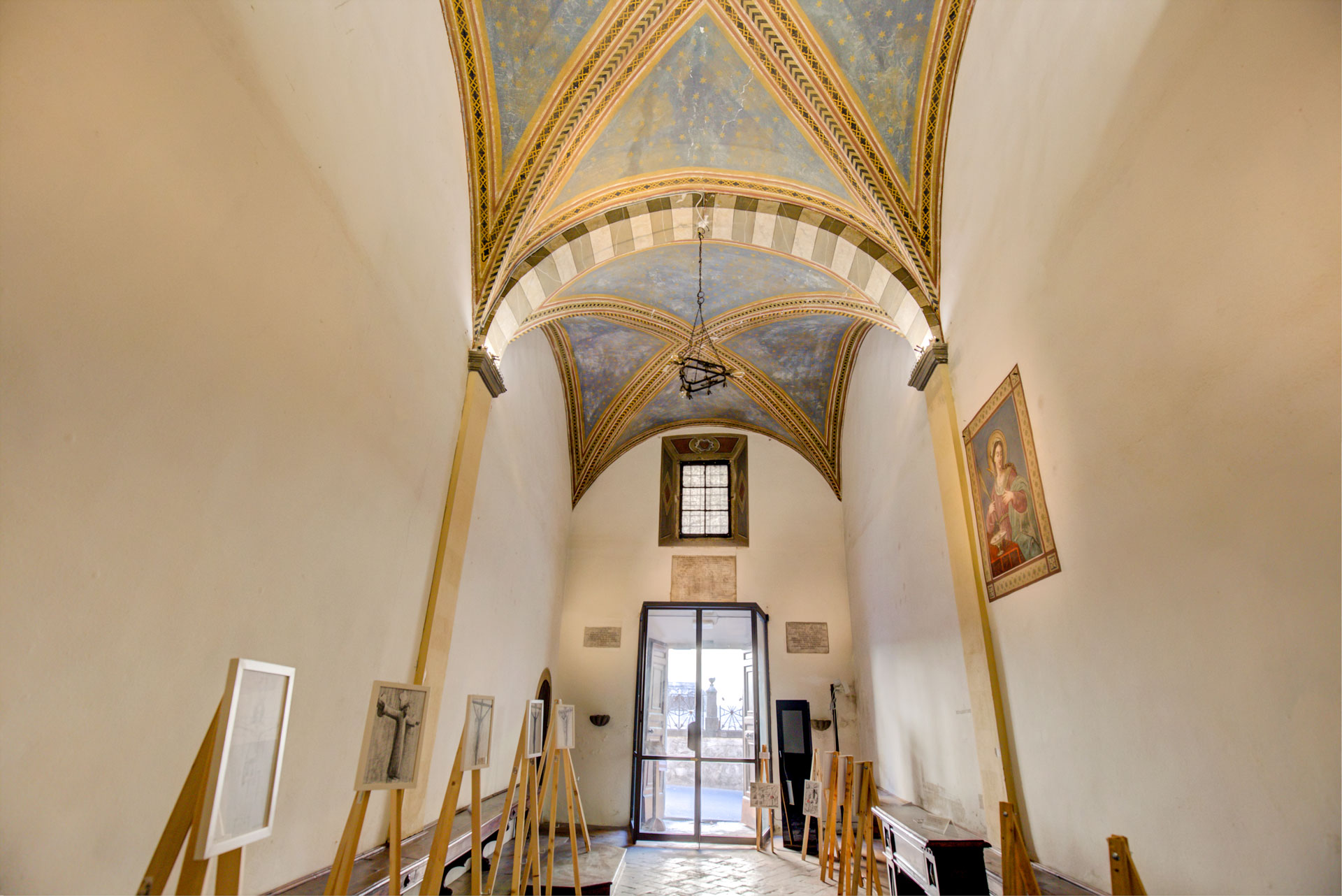 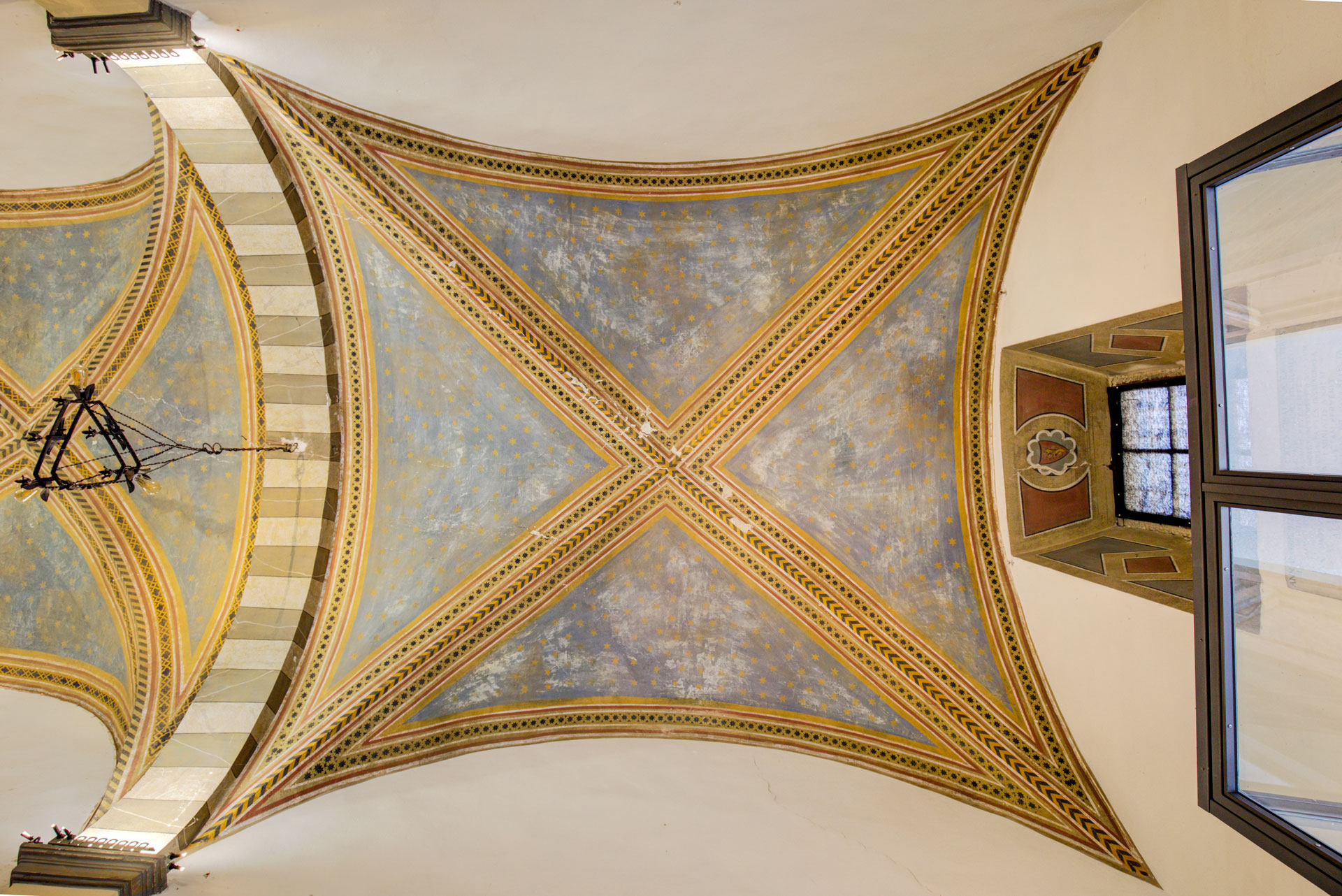 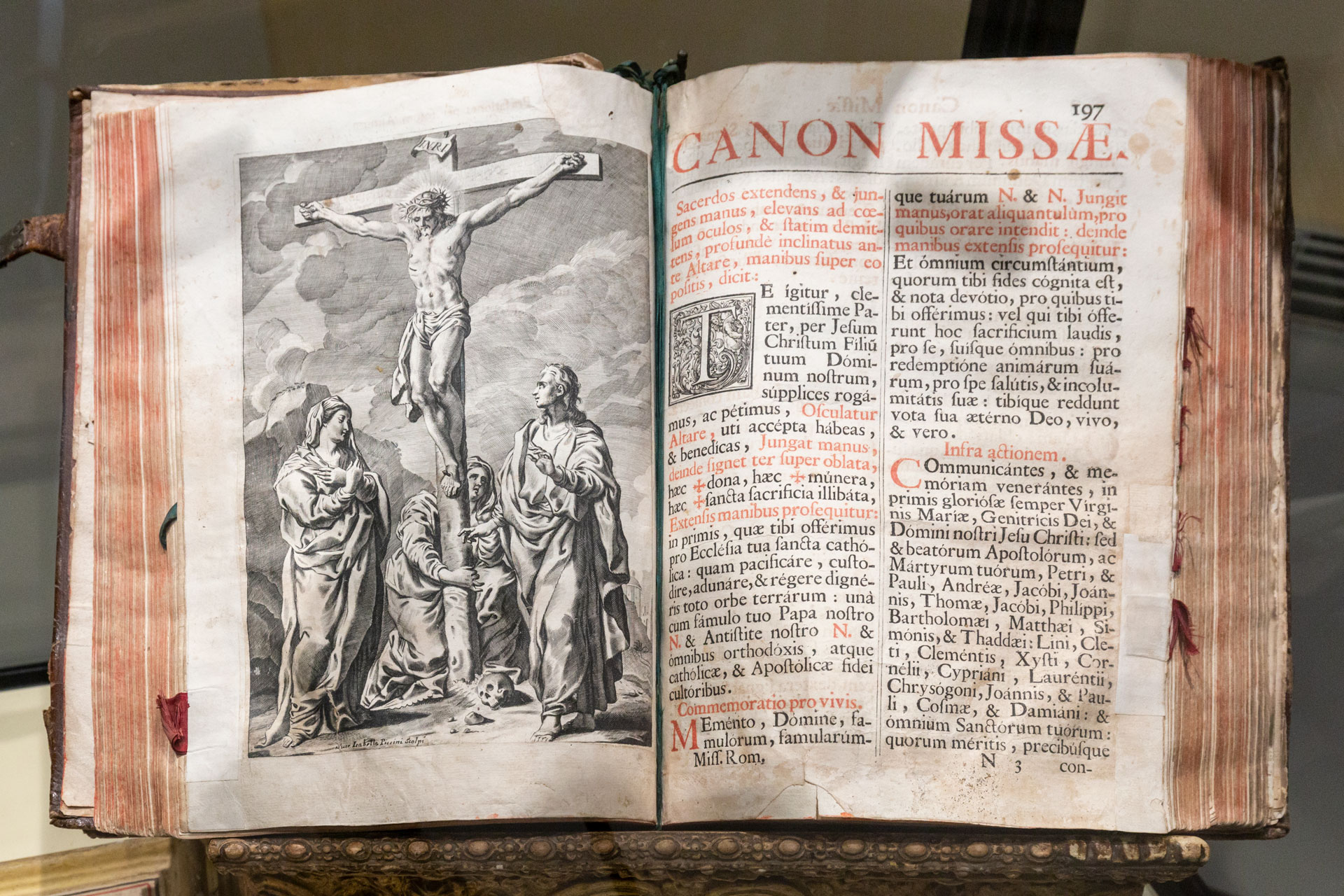 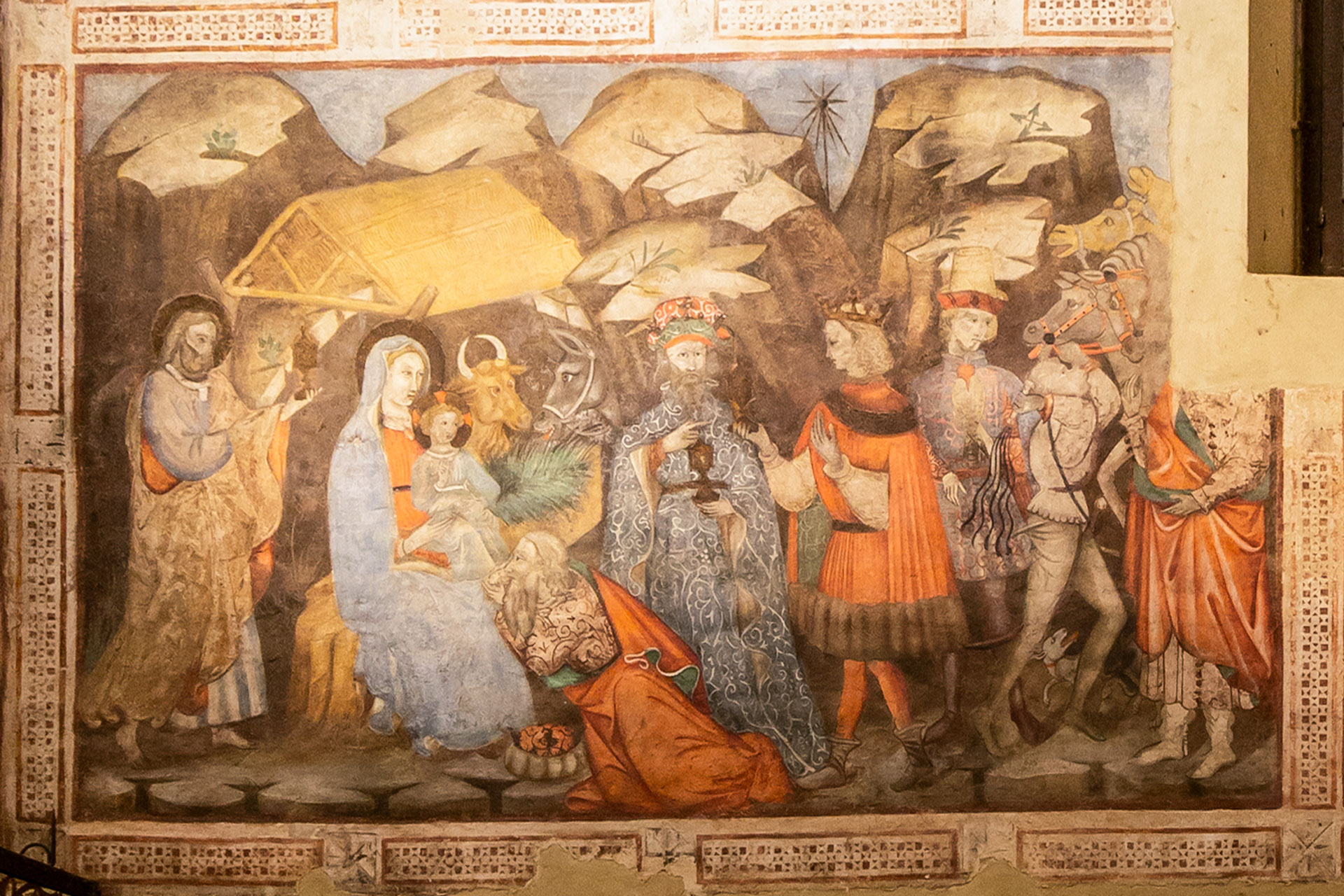 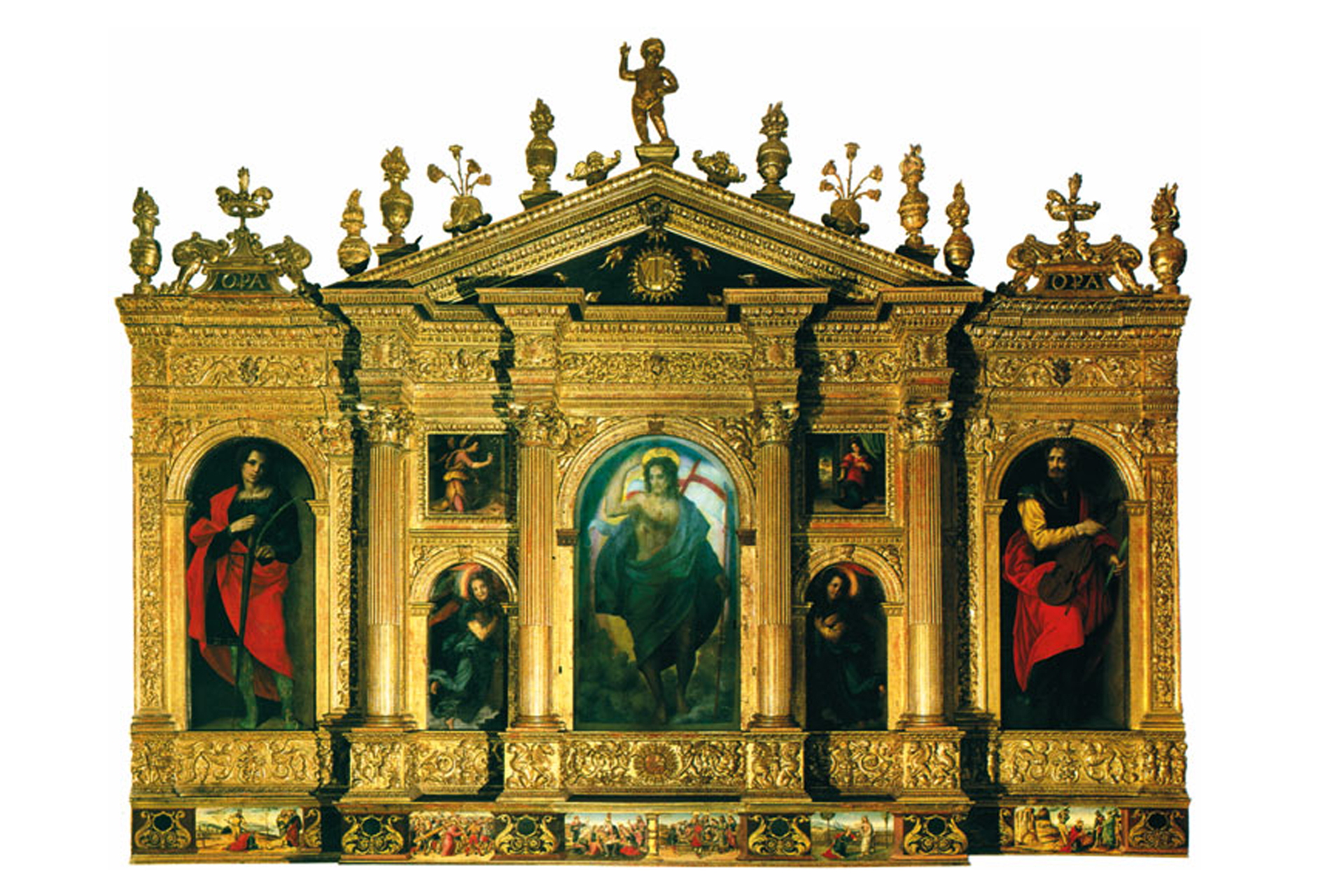 Hall of the Seven Virtues

On the first floor, the Hall of the Seven Virtues is the oldest part of the Palazzo. It was the place where decisions were taken to govern the free municipality after the death of Frederick II. The frescoes with sacred and civic imagery were created between the end of the 14th and 16th centuries through the contributions of the most important families of the city. Of particular interest is the evocative collection of coats-of-arms and heraldic insignia which date back to the 15th century and were placed there by the Florentine ‘vicari’ (appointed governors) and noble families according to the custom of the time. There is also the Virgin Suckling the Child surrounded by the theological and cardinal Virtues, from which the name given today to the room derives. This is a work by Cenni di Francesco di Ser Cenni. 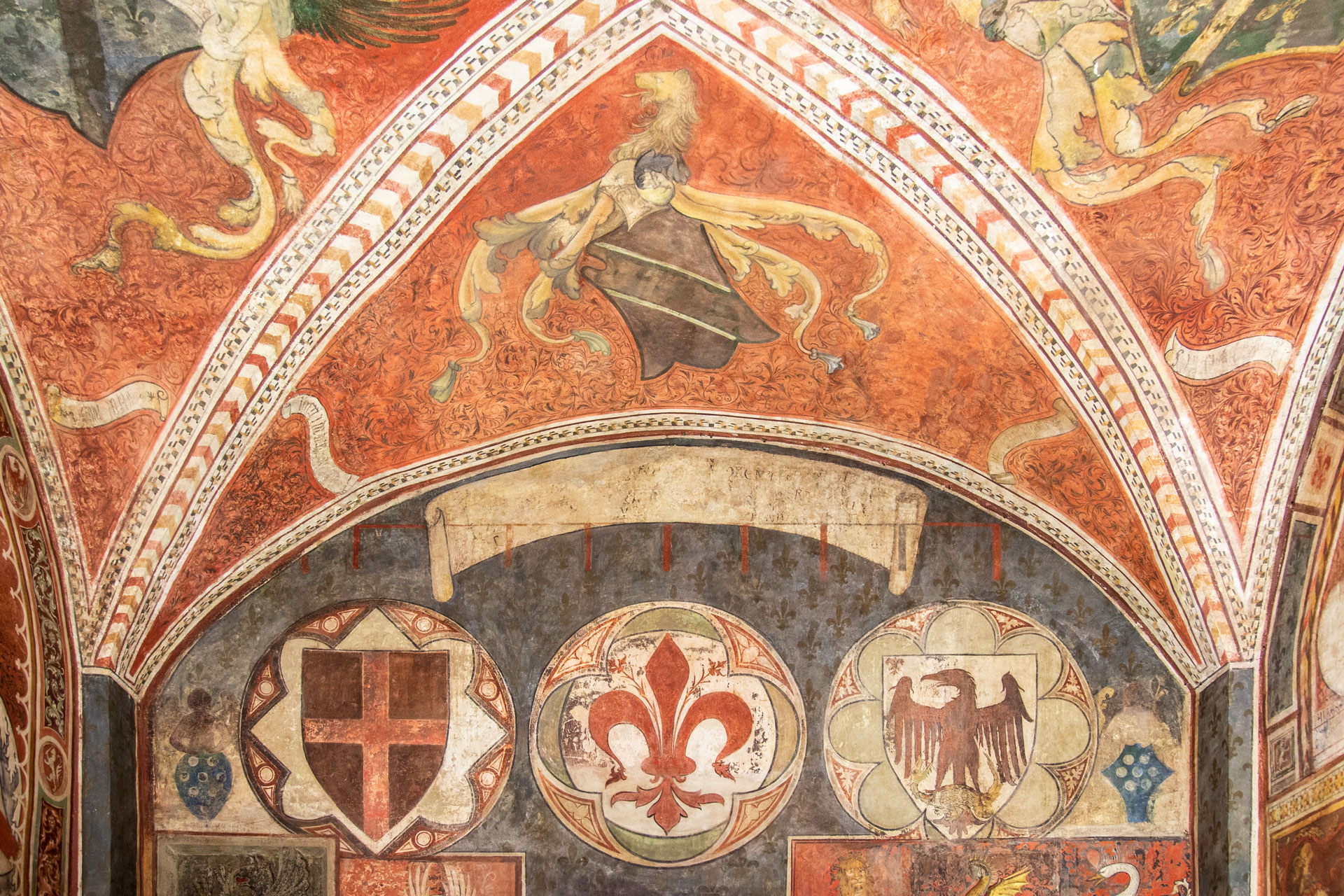 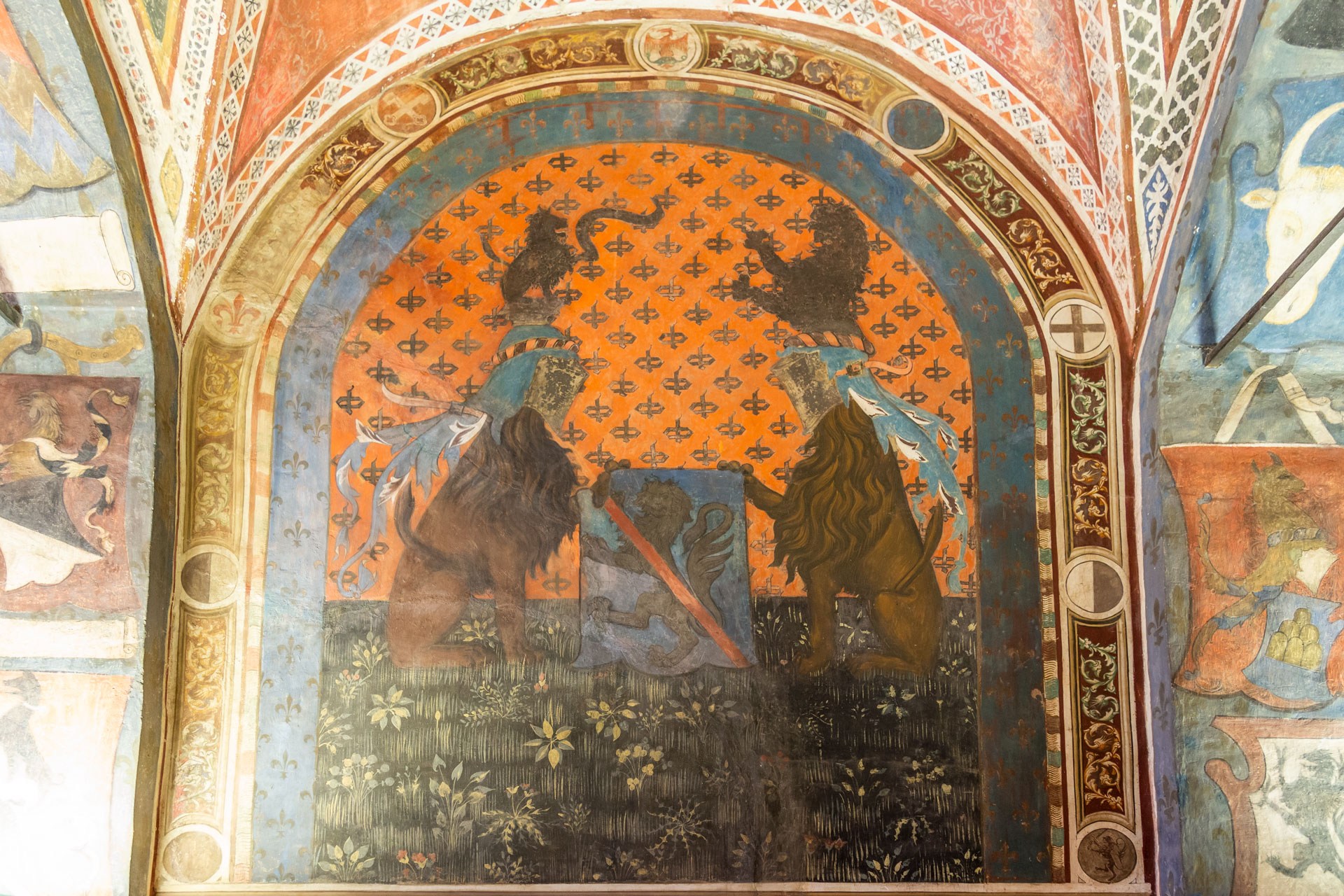 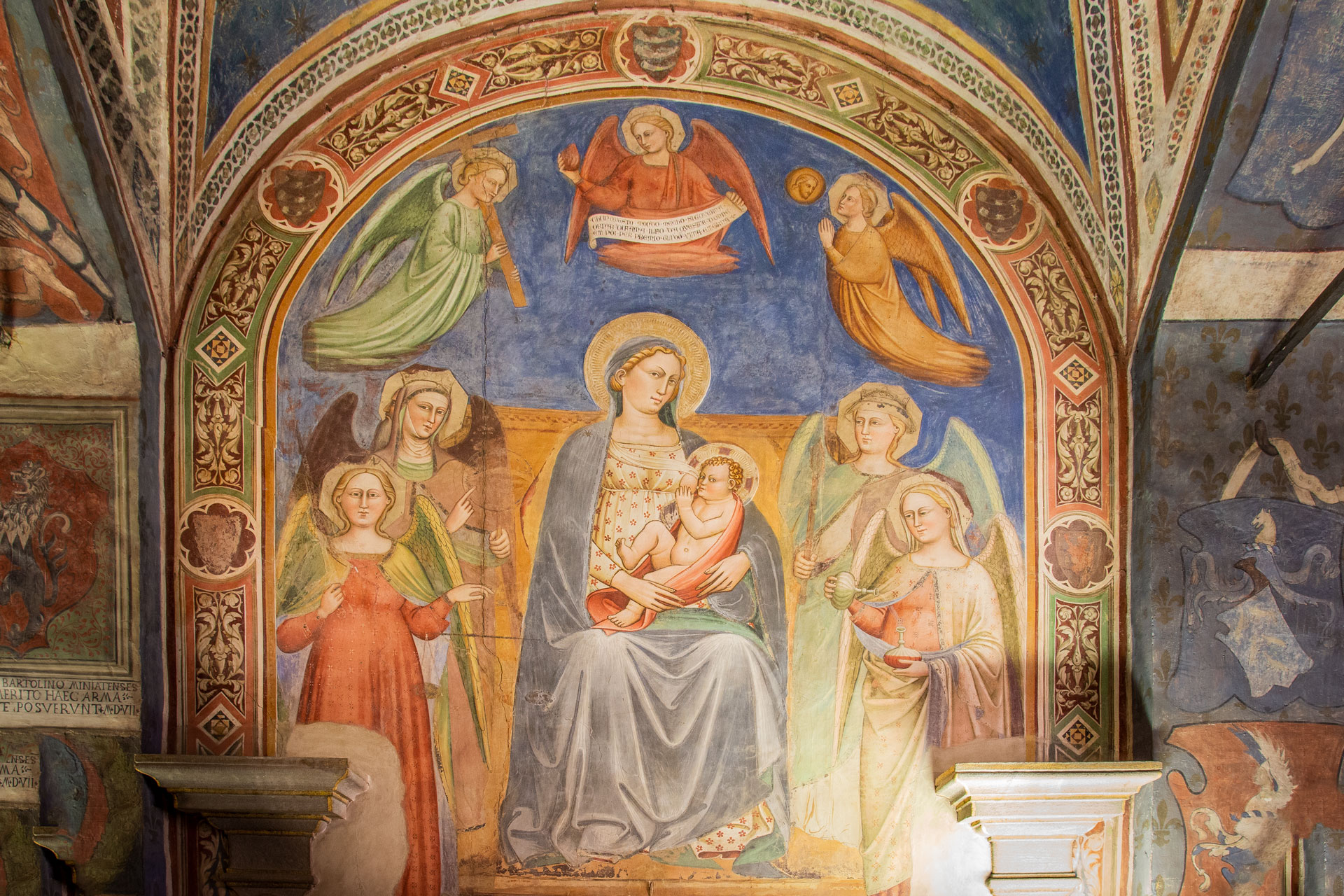 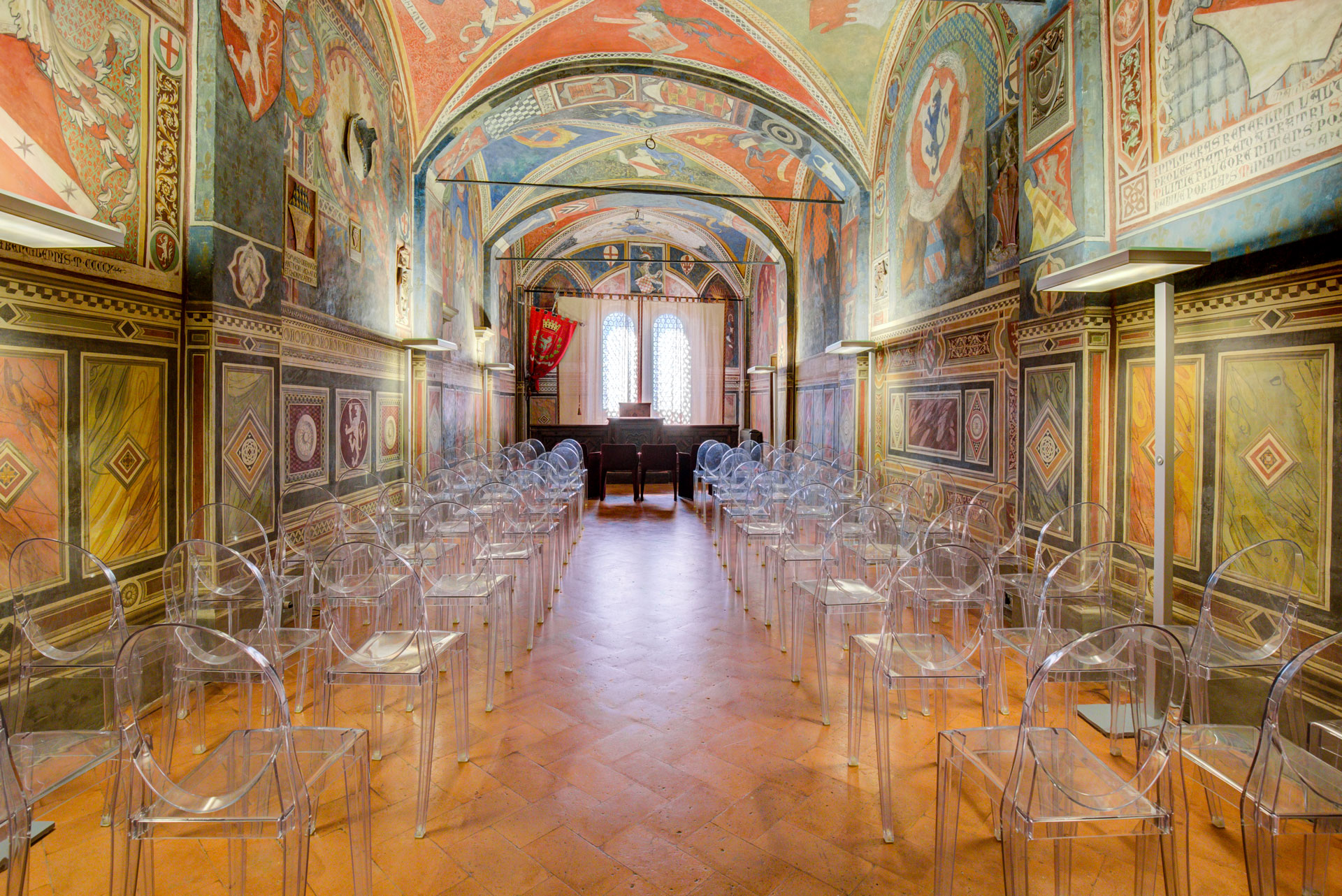 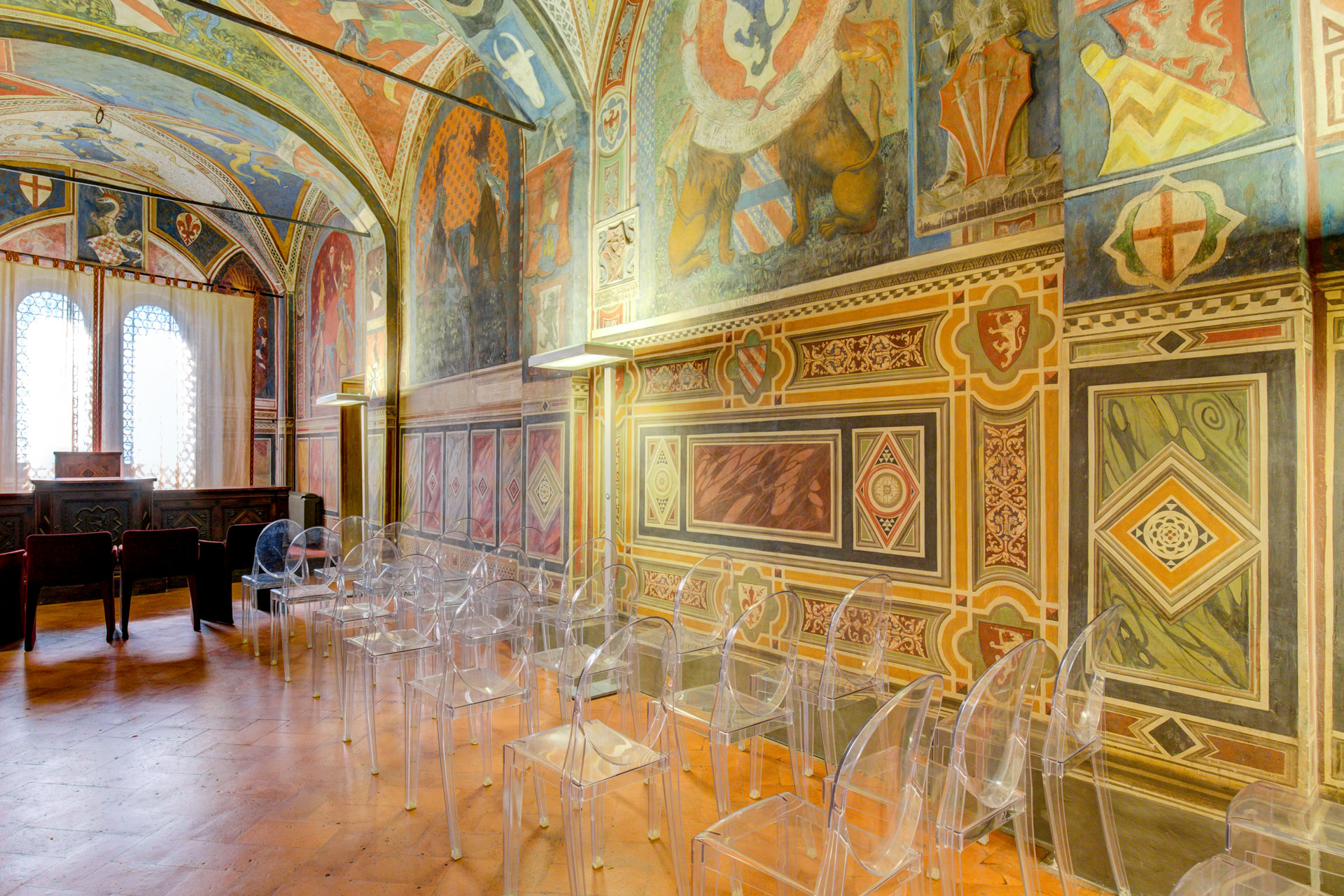 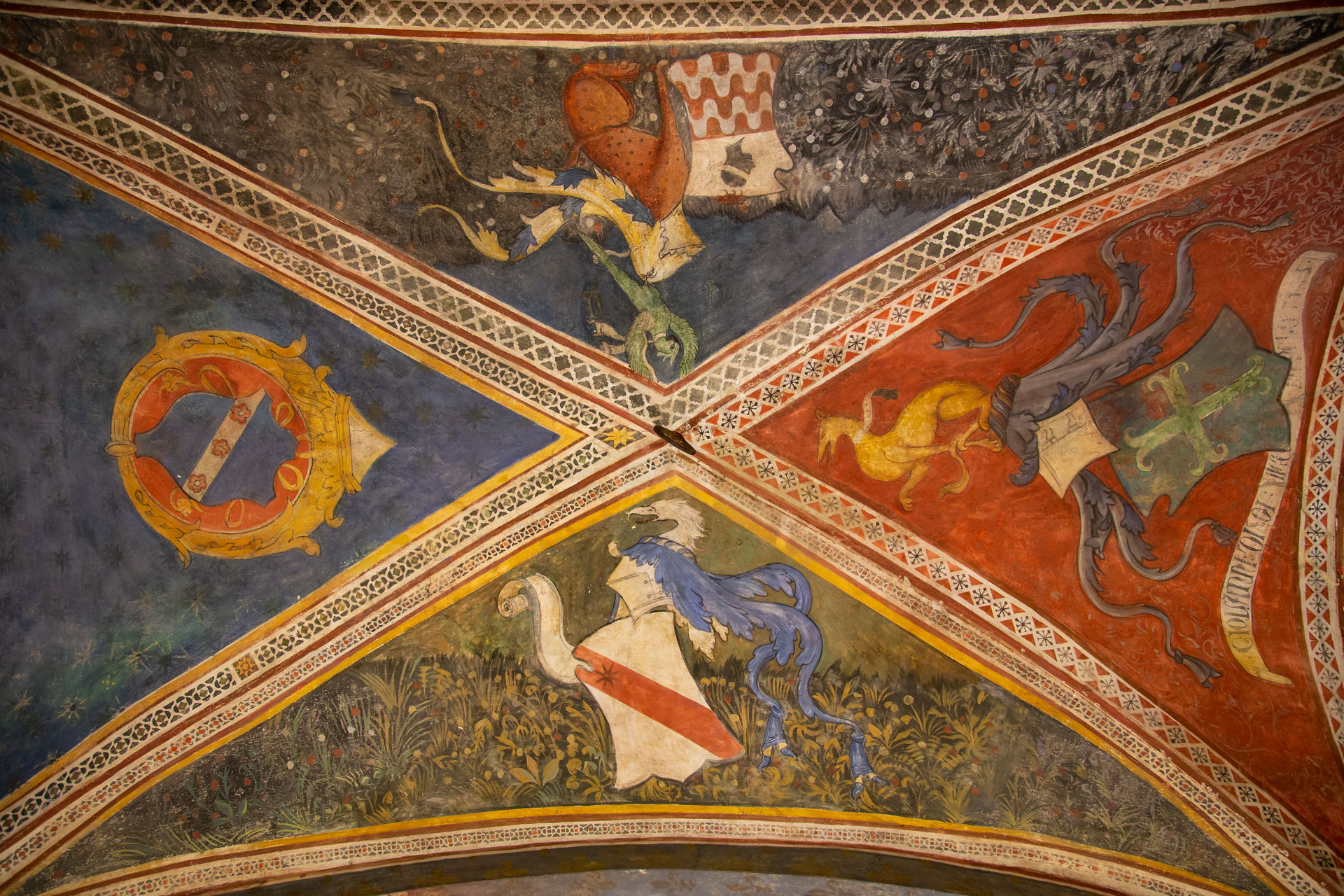 Hall of the Municipal Council

The eighteenth-century entrance hall on the first floor of the building, used as the Sala del Consiglio Comunale, was frescoed and decorated in neo-Gothic style in 1928 by the canon Francesco Maria Galli Angelini with the salient episodes and personalities of the town’s history, including:
– the sanminiatese writer Franco Sacchetti, former mayor of the city at the end of the fourteenth century, who wrote in San Miniato “Trecentonovelle”, in a style that follows the lively talk of the commoners and the bourgeois. Some stories are dedicated to San Miniato.
– Captain Baron Mangiadori, an expert knight who, as is remembered on a plaque in the street dedicated to his family “with his arm and with the council powerfully cooperated in the victory of Campaldino where he fought Dante”. The battle is mentioned in the “Purgatory” (V 85-129).
– the condottiere Francesco Sforza (San Miniato, 23.07.1401 – Milan, 08.03.1466), who was the Duke of Milan, first of the Sforza dynasty. 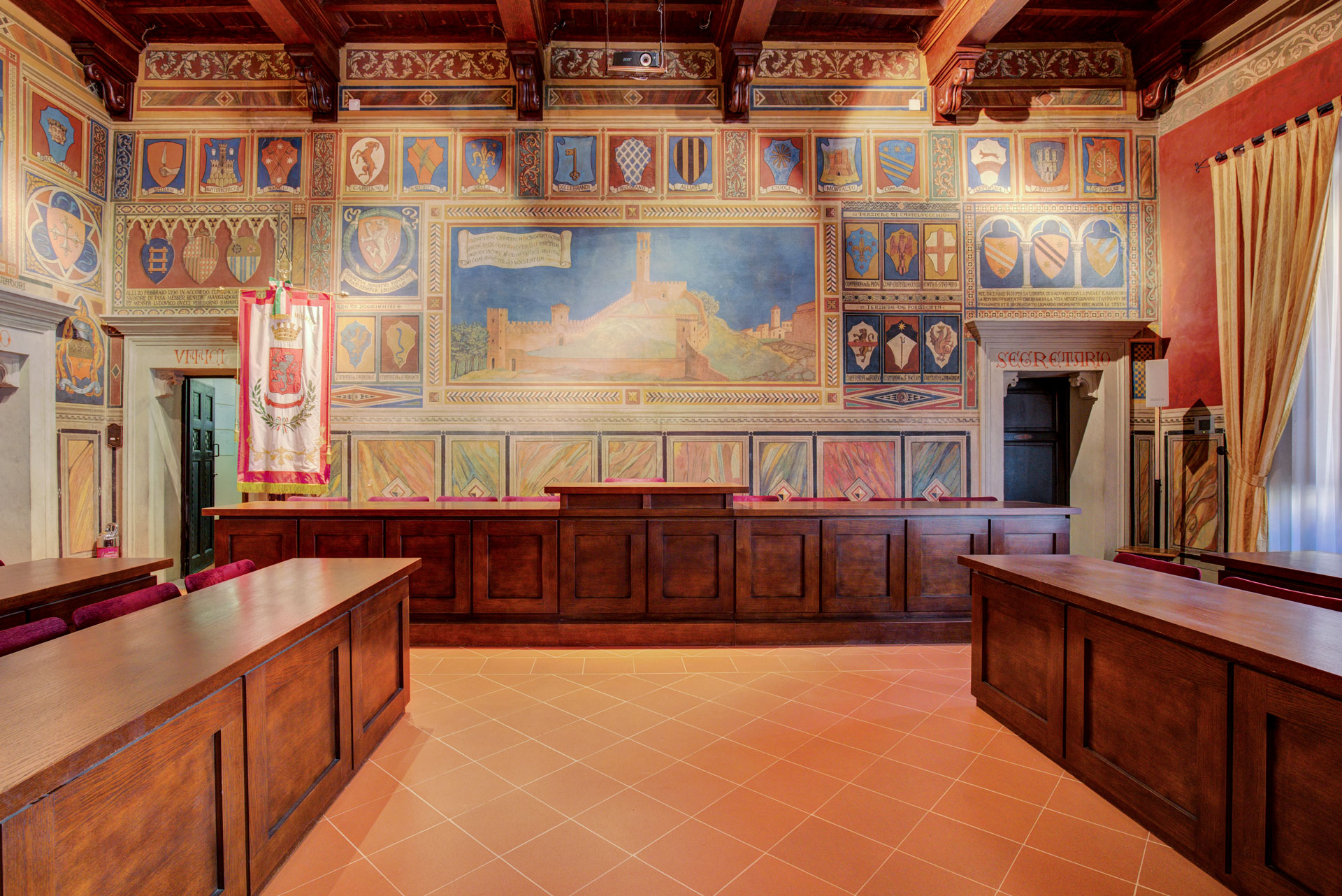 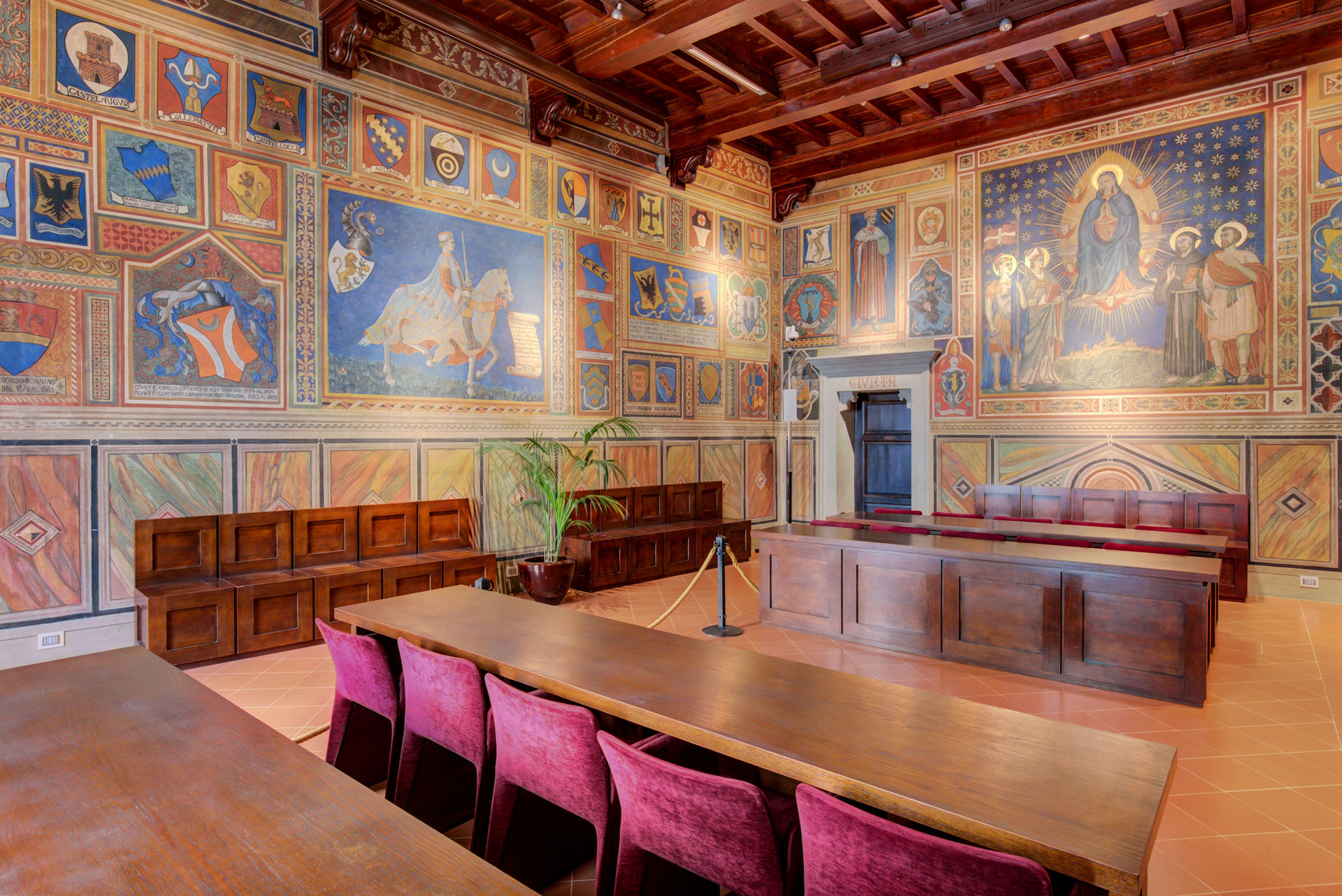 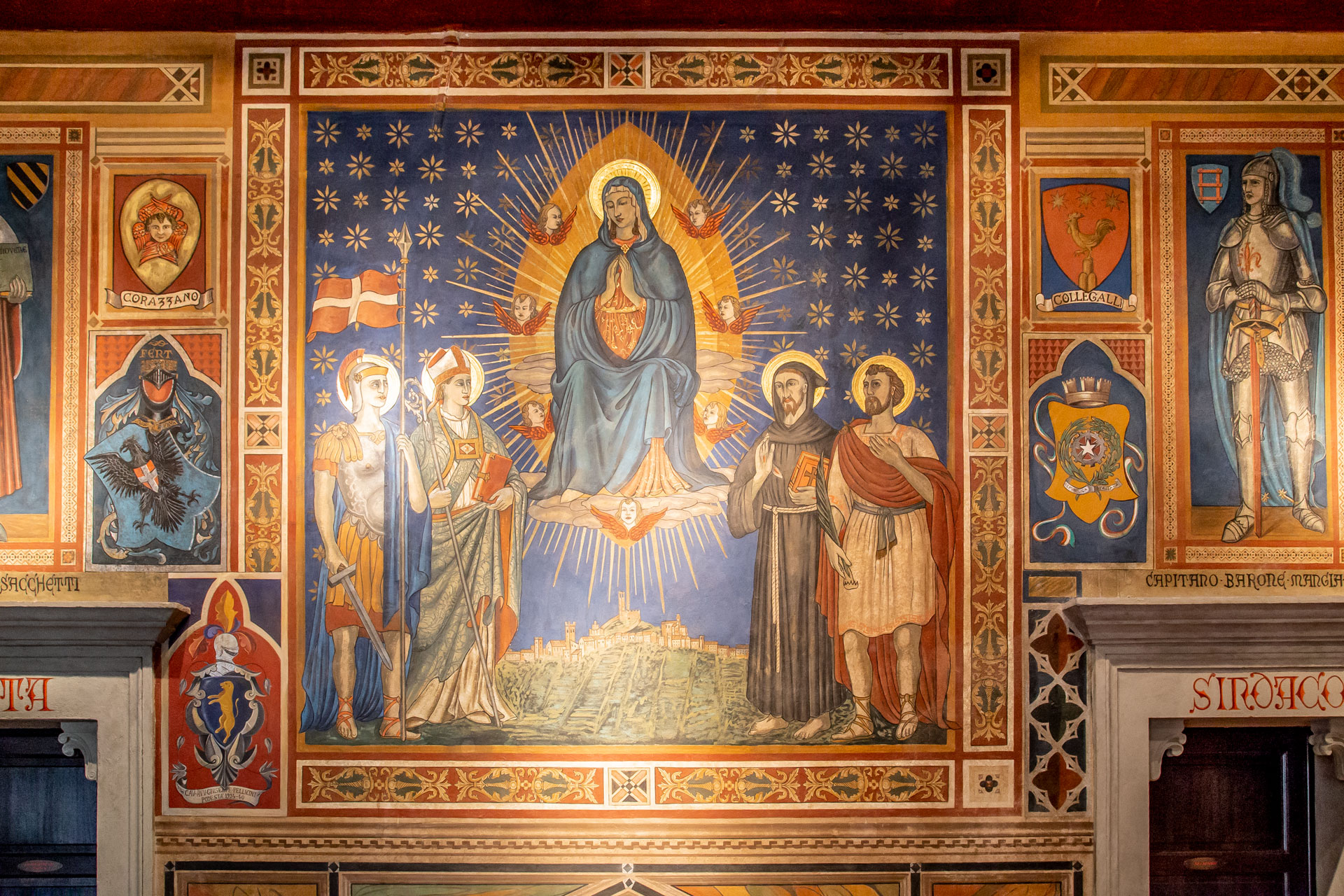 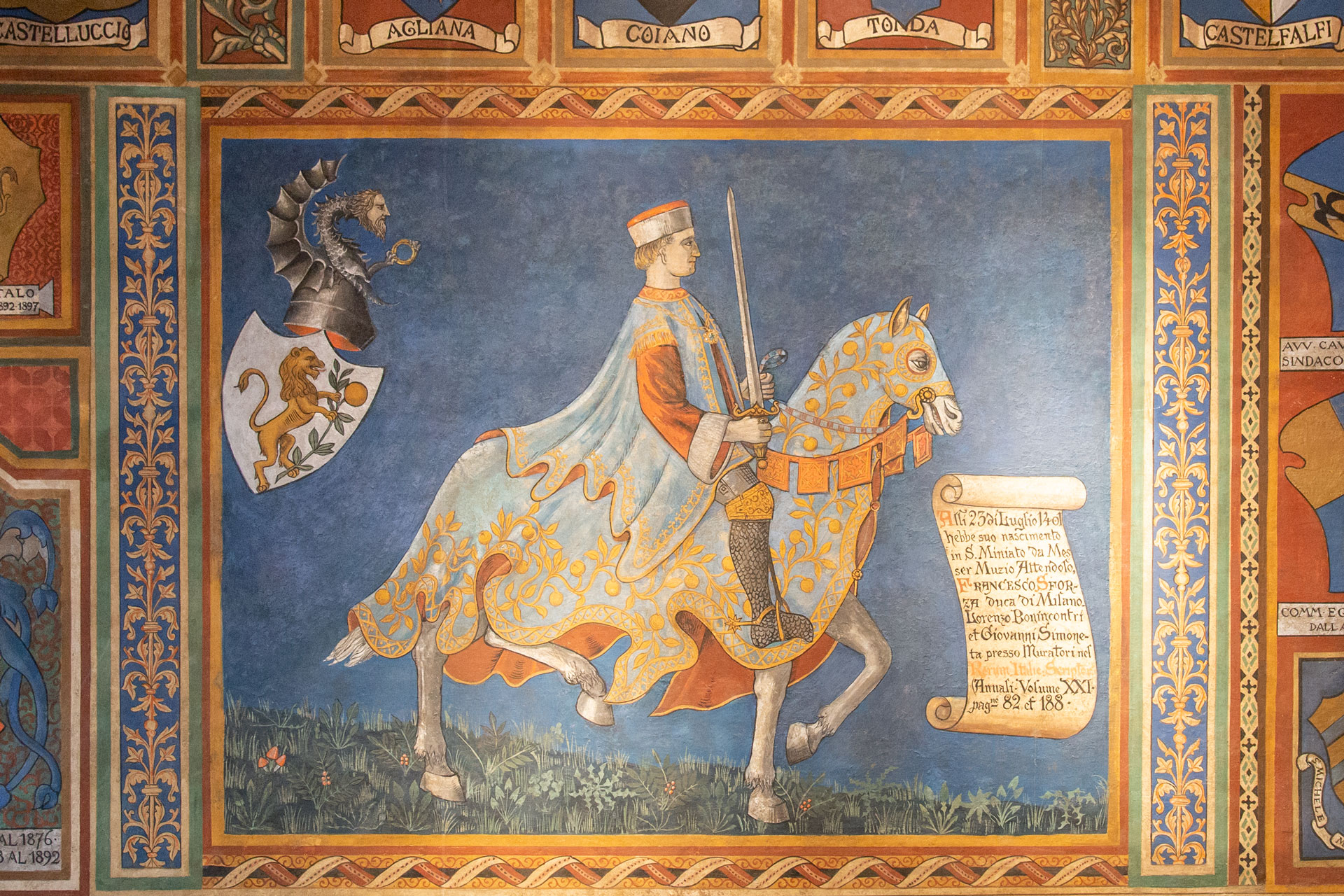 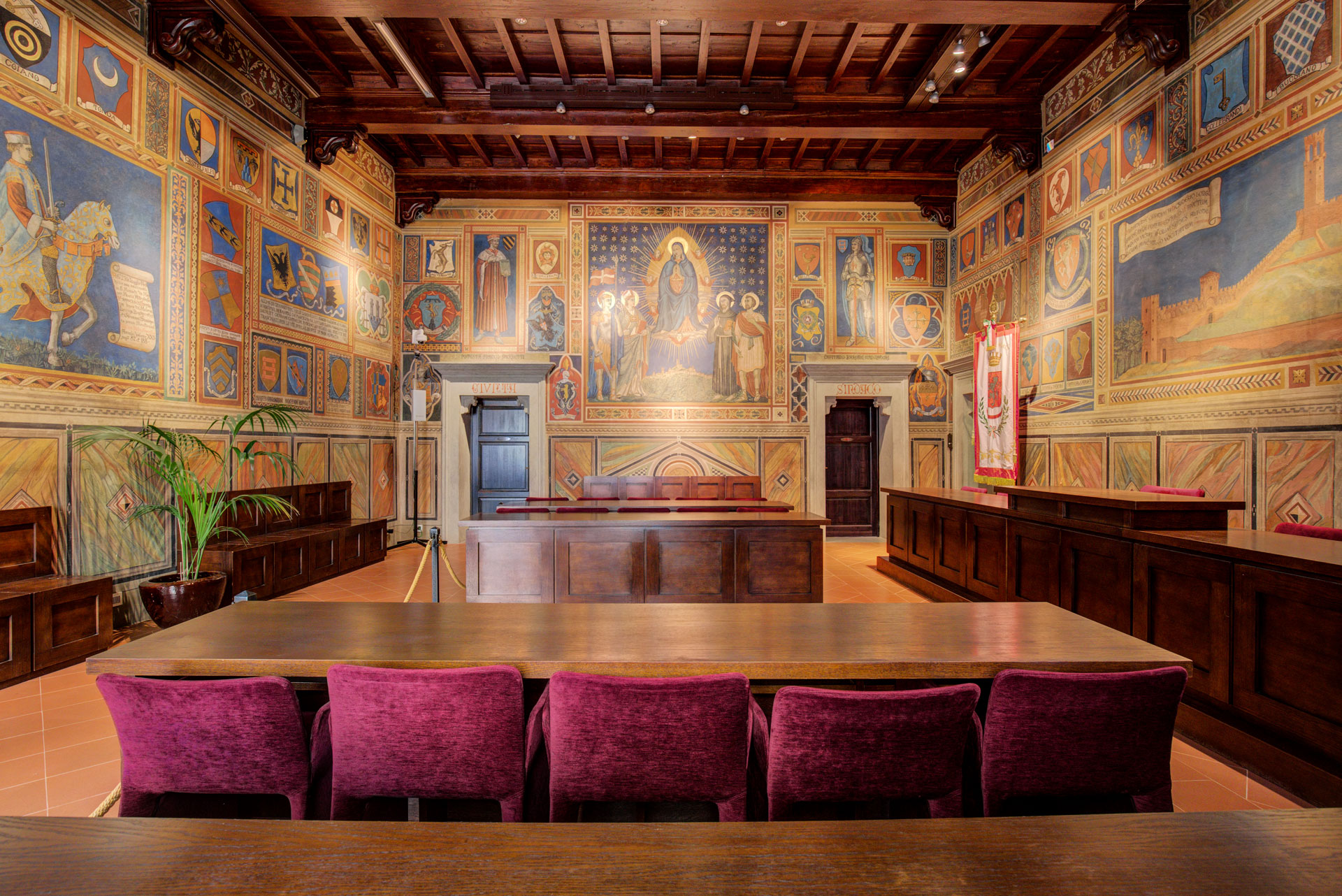 For more information on the visit of the Palazzo Comunale and the Oratory of Loretino, contact the secretariat of the Museum System of San Miniato at the following addresses: